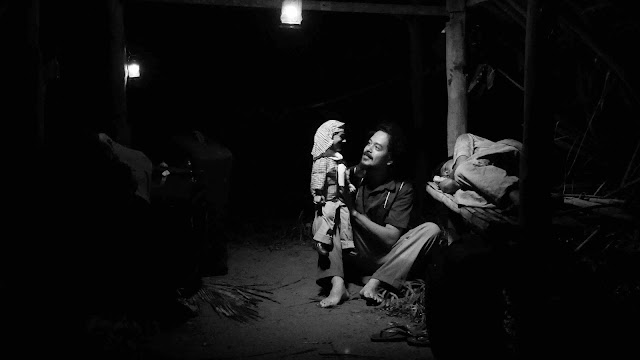 Lav Diaz's Historya ni Ha (History of Ha) may be his strangest work yet. If in Ang Hupa (The Halt, 2019) he proposes a Filipino dystopia complete with dictatorship and pandemic and volcano-induced darkness, and in Panahon ng Halimaw (Season of the Devil, 2018) he presents the Philippines' first-ever black-and-white, sung-through, no-instrument musical, this you might say is his Dead of Night--an astringently deadpan blackly comic film about a ventriloquist and his dummy.

Hernando Alamada (John Lloyd Cruz) is a former Huk insurgent turned famed bodabil star, performing for passengers on the Mayflower as it sails international waters. It's his last tour, he plans to take his savings home to marry his childhood sweetheart Rosetta--only it's not to be: Rosetta has promised herself to a rich man, to pay off family debts. Hernando goes into self-exile instead, and the story proper begins.

We've seen this figure before in Diaz's films, from his earliest (Burger Boys, 1999--first to production, second released) to Kriminal ng Baryo Concepcion (Criminal of Barrio Concepcion, 1998) to Batang West Side (West Side Avenue, 2001) to Ebolusyon ng Isang Pamilyang Pilipino (Evolution of a Filipino Family, 2004) to as late as Panahon ng Halimaw--the loner wanderer, sometimes the film's ideological torchbearer, sometimes its heart of darkness.

One wonders if this figure actually exists in Diaz's life, tho one would be hard pressed to guess who--his father? Diaz himself? In Burger Boys he's a haunting haunted figure in one boy's life, the father he wish he could have loved but never quite knew, represented by a wood angel statue his father once carved but was unable to finish--the statue stands by a roadside, its arms ended in stumps. In Ebolusyon ng Isang Pamilyang Pilipino he's Raynaldo (Elryan de Vera), a boy who wanders from town to town, family to family, fate uncertain, belonging to none, less protagonist than mute witness to the random currents of history. in Batang West Side he's two figures: young Hanzel Harana (Yul Servo), who moves from the care of mother to grandfather to the tutelage/patronage of a malevolent (if irrepressibly funny) drug lord, eventually walking the Jersey streets straight into a bullet; he's also Detective Juan Mijares of the NJPD (Joel Torre), an insomniac introvert of a police officer who grapples with the unpromising investigation of Hanzel's death and his own personal demons.

The eponymous warrior poet (Mark Anthony Fernandez) of Hesus Rebolusyonaryo (Jesus Revolutionary), Hugo Haniway (Piolo Pascual) of Panahon ng Halimaw, and Hook Trollo (Pascual again) of Ang Hupa offer an interesting variation: former revolutionaries and artists and activists forced by circumstance to retire or go into hiding, then forced by further circumstances to come back out in the open and confront their anguished past. Hernando recognizably belongs in this latter category, his chosen profession--ventriloquism--a seemingly odd choice till you think about it: vaudeville (or 'bodabil' as it was colloquially known) was introduced by the Americans at the start of their occupation of the country, was a popular artform in the 50s, Diaz's chosen time period, often included a ventriloquist in the show. One may wonder if a Filipino ventriloquist can ever achieve nationwide recognition until one remembers Manuel Conde who started out as a ventriloquist, and whose early films sometimes featured performances with his puppet Kiko (prints now lost, alas).

So this figure steps out from among the gallery of familiar figures populating Diaz's films, practicing a period-accurate profession while enjoying period-accurate (somewhat) levels of fame--but it's a period crucial to Diaz's thesis, and so (I submit) is the nature of his hero's profession.

It's 1957, President Ramon Magsaysay has just been killed in a plane crash, and journalist Jack Agawin (Erwin Romulo) is picking apart the late president's legacy: "this cycle of mythmaking," he darkly prophecies, "will keep on repeating here in the Philippines," such that "the masses will vote false prophets and leaders." Later one such leader, Among Kuyang (Teroy Guzman), echoes Agawin's words: "Two decades from now we will have a leader from the North...six decades from now a leader from the South." He adds with relish: "I like them a lot."

Magsaysay has let's say a complicated relationship with our former colonizers: some say he's an American puppet; some say he rebelled against this role and that the plane crash was really a CIA sponsored operation to eliminate him--with an actual puppet straight out of American pop culture sitting up there on the big screen and a mythologically outsized metaphorical puppet looming over that same screen's historical backdrop, one starts to see the connections Diaz is trying to make.

Diaz with his analysis on the impact of Magsaysay's death puts a finger on one reason why the Philippine electorate time and time again makes poor choices: Filipinos are in love with the idea of the savior-superman, the leader who will rise up and solve all our problems with a Presidential Decree or two. Agawin's analysis is (as Congressman Torres (Jun Sabayton) puts it) "quite horrifying" if baldly stated, but as in the best vaudeville magic the obvious gesture is meant to distract the audience while the hidden hand performs the real trick: Hernando sitting in one corner drinking in Agawin's postmortem and Among Kuyang's forecast. One almost feels Hernando reacting to this the same way he reacts to Rosetta's rejection: with silence. In the face of such insanity--a presidential myth perpetuating two other such myths, a woman giving her self up to pay for her family's debts--what else can one say?

Brief aside to note that Among Kuyang is another in a line of familiar Diaz characters, the powerful Marcos/Duterte figure who nevertheless betrays some trace of humanity. Where Chairman Narciso is a gibbering idiot and President Nirvano Navarra an advanced case of dementia, Among Kuyang is easily the most charming of Diaz's fascists, whether comparing Sibaltan kilawin to Japanese sushi or espousing the virtues of Malay (as opposed to Christian or Muslim) culture or confiding to Hernando his fears about his near-psychopath sister Matilde (Hazel Orencio). Teroy's Among sounds like everyone's favorite grandfather, full of endearing anecdotes--but he's flanked by men with assault rifles, who will point their barrels at your belly if you so much as make a careless move.

Most films involving ventriloquists (Magic, Dead of Night) have the dummy manifesting the performer's id, saying things he wishes he could say, uttering thoughts that would be unspeakable in polite company but hilarious from a wooden mouth. Difference is that in those films the issues are often personal while Ha talks of the grievous hurt of the world, in the form of poems and jokes. "How about you Hernando my friend?" Congressman Torres asks, "What's your point of view?" Hernando pauses a beat: "I will have to talk to Ha." Even this early Hernando is canny enough to use Ha as a way to express or obscure what he wants to say.

Ha (both an expression of merriment and--presumably--an acronym of Hernando's own name) isn't the kind of troublemaker Hugo from Dead of Night or Fats from Magic is. If he lectures us on politics or the failures of human nature his lectures are leavened with humor, couched in rhyme; he's direct only with Hernando, in their long conversations together-- first time in a grassy field, where they talk over options and Hernando's motives; later in the bathroom, when they discuss what to perform for their comeback. Ha is sly, funny, sometimes cruel: "Loser," he hisses at Hernando, for allowing Rosetta to depress him; their conversations together have the intimacy of longtime friends who don't necessarily like each other but know each other too well (that Lloyd Cruz can do both sides of the conversation and that we accept this without much trouble says something of his acting if not his ventriloquist chops).

Hernando and Ha's second long conversation takes place in the toilet, in front of a mirror, and eventually you realize that Hernando is talking to Ha, who's perched on a windowsill to his left, the same time he's staring at himself in a mirror. Ha's words here are even more cutting: he announces that the masses "are on the level of animals" and gleefully declares that they might as well dance with the devil. Lloyd Cruz plays a complex game, peering over his shoulder when he wants to address Ha, facing the mirror as Ha replies; when Ha speaks the voice sounds as if it's coming from the other side of the glass.

Actually perverse of Diaz to do this, as part of the fascination of the genre is the sentient puppet (or psycho puppeteer) making a spectacle of himself (themselves) in public, saying things the puppeteer doesn't mean (tho badly wants) to say. Diaz keeps Ha's sentience a secret, less a way to generate obvious drama and more a chance for Hernando to literally step to one side and act as objective observer, as handy imaginary psychiatrist discussing his findings with the patient in question.

Visually speaking Diaz continues to make the ironic point that rural Philippines is a breathtaking sight, all towering screens of bamboo, broad canopies of narra and mango, endless grassland--that folks could suffer crushing poverty in the midst of all this beauty is a maddening mad-inducing paradox. Early on, Hernando receives a letter from Rosetta that starts out loving and turns into a tearful farewell; as Hernando sits digesting this mortal gut punch Diaz has the sun pierce through a passing cloud and set the world on fire. Later, what's arguably the film's most painful moment also happens to be its most beautiful: Hernando standing hip-deep in seawater with Ha while the moon glares down from high overhead, a bellyful of storm clouds crackling with thunder to the far left. With each film and using his low-budget high-definition digital camera, Diaz only seems to grow as a filmmaker.

I talk at length of the wanderers that walk through Diaz's films and for a reason: I see them as iterations of Diaz himself, facing unique challenges and repeatedly posing to himself (and through him, us) the question: if such-and-such happen how would you feel? What would you do? And why? It's Diaz's way of poking at the great question underlying his work: who is the Filipino and how can he best resolve the paradox that is the twenty-first century?

Here Diaz proposes yet another set of answers, different from the previous: not perhaps as ambiguous (though breathlessly timed) as in Panahon ng Halimaw, and not perhaps as quietly hopeful as in Ang Hupa. He has Hernando facing an audience of villagers, drilling into them the basic Filipino alphabet over and over again, his varied cadences and inserted bits of poetry and comedy suggesting he's finally learned to move on--to perform--without his woodenhead partner (and lest Hernando be accused of imposing Tagalog on these folk, he prefaces his lesson with the admission that he has as much to learn from them as they do from him).

Diaz ends the film with three men digging a hole in the ground, the image richly suggestive: of a grave, presumably meant for Hernando's now-dead dreams; of the new building foundations mentioned in Hernando's letter, a symbol of present aspirations; and of a latrine, an ignoble yet irreducibly functional receptacle for human shit.

Diaz leaves the image there for us to gaze at, ponder over, maybe come up with our own response--a Rorschach test on which we can project our hopes and fears till the next time he presents a fresh set of questions. 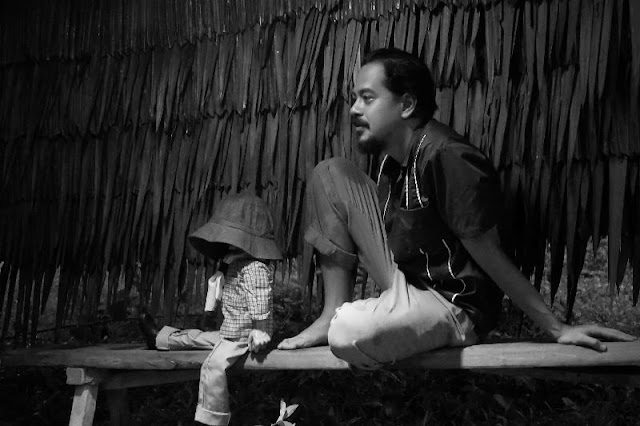 ..sad world of a good artist!