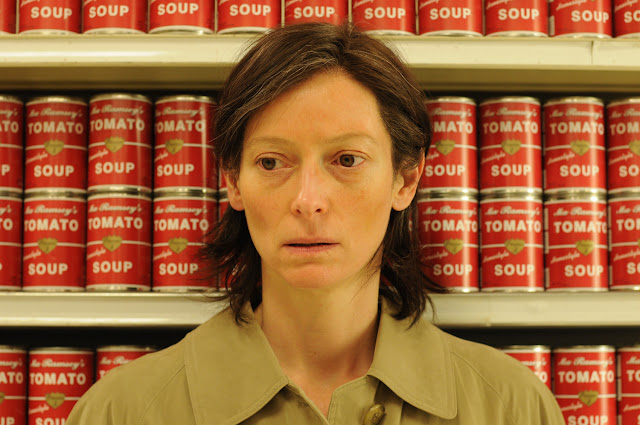 
Ti West's The Innkeepers (2011) is, like his previous work, a loving tribute to as well as a modern-day evocation of those classic '70s and '80s horror films, where the girl is stuck in a creepy old location (in this case The Yankee Pedlar Inn, a hundred year old hotel in Torrington, Connecticut reputed to be one of the most haunted locations in New England), and evil (often occult) matters are involved.

West knows the territory well. The House of the Devil (2009), his breakthrough hit about a babysitter paid an unholy amount of money to watch someone's mother in a decayed old mansion for a few hours, is a low-budget homage to Roman Polanski's Rosemary's Baby (1968) and the early independent efforts of John Carpenter. It featured genre-related casting choices like Tom Noonan (Wolfen (1981), Manhunter (1986)), Mary Woronov (Silent Night, Bloody Night (1974), Eating Raoul (1982)), and Dee Wallace (The Hills Have Eyes (1977), The Howling (1981)), iconic '80s music (The Fixx's “One Thing Leads to Another”) and--most telling (or damning) of all--the sudden shock zooms and muted color palette that were the staple of horror cameramen of the time period.

If House was West's Rosemary, The Innkeepers is possibly his The Shining (1980). Claire (Sara Paxton) and Luke (Pat Healy) are front desk clerks manning the Yankee Pedlar Inn; come Monday, the hotel closes for good, and the two have been asked to preside over the establishment's final weekend. That's the premise; actually the two have cooked up their own subplot--Luke has brought some sound-recording equipment, and hopes to capture proof of the existence of Madeline O'Malley, an abandoned bride who hung herself from the ceiling of room 353. As with House of the Devil where the supporting cast (Woronov, Noonan) supplied much of the atmosphere, interesting guests walk in: Alison Bartlett's angry mother, Kelly McGillis' former celebrity and psychic, George Riddle's gruesomely old man--and that's basically it. West's productions are not known for their extravagantly large casts.

West is something unique in this day and age of digitally created horrors tossed at handheld cameras with ADHD regularity: he's a storyteller. What's more, he's a patient storyteller, one unafraid to bide his time and allow atmosphere and setting (The Yankee Pedlar being a particularly memorable setting) to seep into the bones, allow the frankly brilliant sound engineering to suggest things going on around this dark corner or behind that shut door, let the audience's minds do most of the hard work while he orchestrates light and sound, props and performers with the moonlight-and-gossamer finesse of a pianist performing Debussy.

For about the first hour or so nothing much happens, mainly Claire and Luke goofing off, checking out porn sites at Luke's laptop, sipping elaborate coffee drinks or cheap beer, showing Claire a particularly creepy video of a rocking chair (what makes the chair so creepy isn't that it does anything but that it doesn't--and does so for an uncomfortably long time). Paxton and Healy playing Clair and Luke respectively have a nice chemistry going, as a pair of not-all-that committed workers thrown together possibly for the last time, one definitely attracted to the other but too shy to say so, the other definitely attractive but too clueless to realize it. One might argue that this and not the shenanigans that follow is the heart of the film, is West's true gift--the leisurely accumulation of character and detail in an entertainingly persuasive work environment, so when the red-dyed Karo syrup finally hits the proverbial fan you care about who survives and who is cannon fodder.

We're not talking originality, mind you; Ti West is not an especially radical new talent determined to sweep away hoary old conventions. No, he's a decidedly classical new talent, content with collecting hoary old conventions and re-creating them with passion and energy. He does the old stuff straight, and in such a way that in this age of ironic posturing and cynical smirks his conviction feels downright refreshing.

John Carpenter was like that; with his Hawksian sensibility and Hitchcockian camera moves he championed the virtues of classic genre filmmaking and inspired a generation of younger filmmakers; West is a member of that generation and while it's too early to be definite there are signs indicating that he'll be influential too.

If West is missing anything, it's this: Carpenter wasn't content to just emulate Hawks and Hitchcock; he eventually tried to exceed them (in films like They Live (1988) and In the Mouth of Madness (1994), he (arguably, at least) staked out his own distinct territory). I think West's a craftsman--a good one--not yet an artist. His most interesting quality at the moment is his willfulness, his determination not to bend to the fashion of the times (abundant digital effects, shaky-cam, ADHD editing) but hew to his own antediluvian line.

It may also prove to be his greatest limitation, this lack of creative fervor. One imagines a filmmaker with an impressively accomplished visual style, but that's all he is right now--an impressive style. Hopefully he finds a script with enough demonic energy to seize possession of his soul, bring the potential artist within the film craftsman to vivid, unruly life.