Difficult to resist comparing the film to Edmund Goulding's 1947 version. The earlier attempt is the leaner effort, with sharpedged black and white cinematography and a heroically unglamorous performance by Hollywood romantic action star Tyrone Power. Goulding tells the story with admirable speed and clarity: we know from the first hour that Power's Stan Carlisle is a neophyte eager to learn carny ways, that Joan Blondell's soothsaying Mademoiselle Zeena has a complicated relationship with alcoholic husband Pete (Ian Keith), that Stan also has eyes for spangled ingenue Molly (Coleen Gray). On the down side you wonder at Molly's last-minute refusal to participate in an elaborate scam, and at the film's softened final scene (reportedly imposed by studio chief Darryl F. Zanuck).
Del Toro (working on the script with film critic Kim Morgan) restages the aforementioned scam more convincingly and restores Gresham's unsparing ending, on the other hand neglects to fully explain the intricacies of Zeena and Pete's relationship (basically she feels guilty for having driven Pete to drink). The diminishment of the Zeena (Toni Collete here) and Pete (David Strathairn, woefully underused) subplot means greater focus on Bradley Cooper's Stan who, being more guarded (Power's starts out chatty, with an almost childlike sense of wonder), takes more time to open up to others. The resulting runtime of two and a half hours--some forty minutes longer--can try the patience of most moviegoers, especially when the narrative is this bleak.
Interesting how del Toro has softpedaled the anti-religion theme--this Stan is only mildly a Christian hypocrite, the name of God passing less frequently from his lips; instead del Toro homes in on the multigenerational impact of alcoholism, shooting bottles of moonshine as if they contained honeyed nectar (Why? Is del Toro shy on the subject of faith? Is he a practicing Catholic? Or does he find the issue less interesting than what he actually tackles?). Interesting too how del Toro and Morgan have retooled Molly, who starts off naive but fairly smart, doesn't break character while running a racket (the mark of a true carny), eventually realizes that the man she married is a self-centered jerk.
Both versions gloss over Stan (now The Great Stanton) being dumb enough to submit himself to a therapy session with psychologist Lilith Ritter (the unsettling Helen Walker in the original, the gloriously over-the-top Cate Blanchett in del Toro's version) when he knows Ritter records her therapy sessions (it's how The Great Stanton gets his inside dope on the rich and powerful). Neither film can quite convincingly explain why Stanton would actually trust his money to Ritter...but never mind. What great noir has a comprehensible entirely plausible plot? Or--flipping the question--what comprehensible rigorously plausible noir can ever be truly great? Seems like obfuscation and flimsy logic are givens of the genre.
Goulding's film is a series of inkwash drawings shaded infinite shades of gray--as if Gustave Dore had risen from the dead to try capture images of The Great Depression; del Toro's is more like Edward Hopper on opium--dull colors brought to somber life (to somber light?) by flickering incandescents.
What del Toro gets right--what I believe drove him to make the film--is the challenge of depicting the arc of a man. The torpid pace adds a touch of grandeur to Stanton's downward spiral (made just a little more plausible, a little less avoidable), a touch more mystery to his ultimately pathetic figure. Looking back, he could have avoided all this at several points, could have chosen a better life for himself--but catching him in the act of looking back you (if you're willing to submit to the film's spell) just might catch something of yourself in the man, you might recognize the all-too-human act of examining a life full of shame and regret.
Del Toro in an interview pointed out that in making what's arguably his first noir he didn't want to resort to the usual trappings: the slow ceiling fan, the shadowy blinds, the curling cigarette smoke (He does have a femme fatale in Cate Blanchett's Lilith--and so what if she's obviously bad news? This is Cate Blanchett we're talking about. Can you resist her feline eyes and red slash of a mouth? Can you resist the electrifying aura she radiates? Stanton thinks he can handle her despite the warning signals--more hubris on his part). Del Toro wanted to do something different and I submit he succeeds, the man's gradual rise and precipitous fall all the more terrible for its unswerving trajectory.
In the final twenty minutes the film goes full del Toro on us, unleashing the bone crunching violence the director is known for, but I submit this is yet another red herring planted along the way; we're fed these tidbits of choice bloodletting only to end as the novel ended, the only way it can possibly end: on Stan's weathered weary face, realizing the full circle his life has just described. In all of del Toro's career there are few images as horrifying. 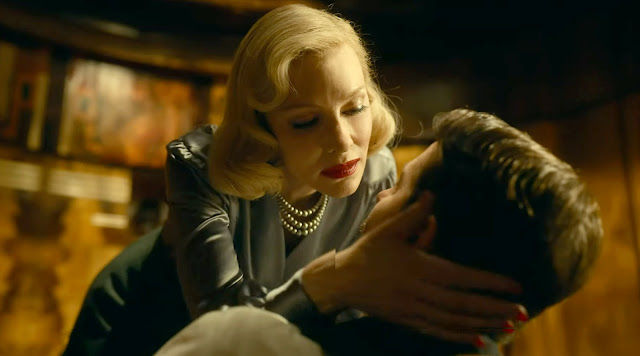