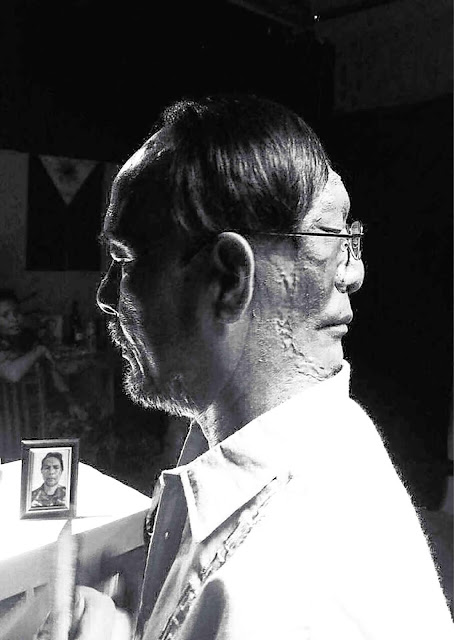 Not long after Brillante Mendoza's Amo (which takes its cue from Respeto's rap-driven score) we have Lav Diaz's take on the Duterte regime. Panahon ng Halimaw (Season of the Devil, 2018) is no small-scale response: two hundred and thirty-four minutes long, some six minutes short of four hours. And it's a musical.

"A four hour musical?" you ask, but such prodigies are not unheard of: Ramesh Sippy's Sholay runs two hundred and four minutes and (not that it really matters) has gone on to become one of the biggest boxoffice hits in Indian film history; Ashutosh Gowariker's Lagaan is only ten minutes shorter than Diaz's latest and has earned respectable money, locally and internationally.

Diaz had to push the outside of the envelope of course: the film has no instrumental accompaniment whatsoever, with all numbers sung a capella (by way of comparison Bruno Dumont's recent Jeannette: the Childhood of Joan of Arc features drums, synthesizer, electric guitar, even dancing); it's black and white (Dumont's is in color);  its narrative is oblique (aside from a voiceover narration establishing setting--1979 in the southern Philippines--we're on our own) and glacially paced. If Diaz as he's often declared in interviews wants to produce uncompromising cinema this is about as uncompromising as things get, without even a single strummed guitar chord to help the plaintive singing go down easier (except in the end where the director himself performs a number).

Which leaves you with--what? Figures on the big screen, often standing for minutes at a time. The camera (operated by Larry Manda) almost always locked down though to Diaz's credit his staging framing and lighting have developed considerably--the camera tilted at an often slightly surreal angle, the brutal lamps creating startling effects (the flood of light the inky pools of shadows), the long-take wide shots encapsulating an actor's movements (or relative lack of), a singer's entire performance. Diaz seems to aspire to a monumentally Brechtian simplicity--the empty stage with lone figures standing at strategic points, casting shadows that interlock in interesting ways.

And something happens. The monochrome imagery, the melancholic characters, the lilt and lyricism of voice and words and song get a hold of you and--if you happen to still be paying attention, if you're still attuned into Diaz's severe aesthetics--squeeze.

This is Mindanao two years after Marcos' Presidential Decree 1016 established the Civilian Home Defense Forces (CHDF)--paramilitary units trained and equipped by the Department of National Defense notorious for civil rights abuses and killings. At the same time (a Dickian time-distorting / alternate universe-hopping conceit) this is also 2017 Philippines: gunmen on a bike ride up to a youth and shoot him in the head; a cardboard sign is fixed to his body--"AKO'Y REBELDE HUWAG TULARAN!" ("I'M A REBEL DON'T IMITATE!"). The Tenyente (Hazel Orencio--a startling departure from her helpless Florentina Hubaldo) and Ahas (Joel Saracho) scheme to win support from the masses: "We'll blame The Owl (Pinky Amador)!" "We'll blame The Scholar (Bart Guingona)!" 'We' will use superstition* and simpleminded thinking ("Fault the intellectual, the drug addict, the Other") to impose order on chaos, clarity on confusion.

*(Myth and folklore exert a pull on our subconscious, our imagination--a message slipped into our awareness from as far back as Mario O'Hara's Pangarap ng Puso (Demons) and echoed in this film)

Diaz doesn't mince words doesn't employ his usually sly satiric touch or sense of moral ambivalence, presumably because he considers Duterte too far gone down the path of fascism for subtlety to be effective, much less desired. He directly equates the present president's War on Drugs with Marcos' War on Communism, accuses both chief executives of exploiting a hot-button issue to justify terror oppression indiscriminate killing.

To this end The Tenyente and Ahas appoint Chairman Narciso (Noel Sto. Domingo) as leader of their cause. Narciso comes straight out of nightmare, with a face on either side of his head: the front with its sour deep-lined expression, the back blind and silent (nice touch: the blind face wears glasses). Narciso was possibly inspired by the story of Edward Mordrake, a likely apocryphal man with a face growing out of the other side of his skull; it was said that the extra face (of a beautiful girl) would torment him with whispers of temptations and "such things as they speak of only in Hell," ultimately driving him to kill himself.

Diaz with the help of makeup artist Daniel Palisa has a field day creating Narciso's head--the face in the back resembles (from differing angles) the product of an unholy breeding experiment between Duterte, Marcos, and Marcos' Defense Secretary (later Defense Minister) Juan Ponce Enrile, who helped engineer the 1972 declaration of Martial Law (bonus observation: from one angle I swear I can see Solicitor General Jose Calida leering at me). When Chairman Narciso delivers a speech it's a high-pitched rant that makes no sense whatsoever (from Anomalies and Curiosities of Medicine: the lips "would gibber without ceasing")--a brilliant parody on Duterte's obscenity-laced word-salad tirades that recall Chaplin's wicked take on Hitler in Modern Times (Critics complain that Diaz lacks humor; I submit that his dry absurdist comedy tends to slip past their grasp). Duterte a braying emptyheaded figurine exploited by his lieutenants as an excuse to commit atrocities? Wouldn't be surprised if this were true.

But Diaz saves his most heartfelt regard for the victims. Hugo Haniway (Piolo Pascual) is a poet and writer, his wife Lorena (Shaina Magdayo) a doctor. It's an odd relationship: we first see Hugo reciting poetry at a party but when it comes to the issue of his wife wanting to leave for the province to practice medicine among the rural poor he's mute; he has to leave his wife a note at his typewriter that (presumably) his wife will find and read (luckily she does). Intentional or not the moment recalls Kubrick's The Shining, where another wife also looks over her estranged husband's typewriter and has an epiphany about his inner state of mind--though in Kubrick's film this drives a permanent wedge between husband and wife, in Diaz's it brings them briefly together before their possibly final parting.

When Lorena leaves Hugo falls apart; he takes to drinking and resists the help of even his most loyal friends (Angel Aquino as Anghelita--yes the characters' names are a little too spot-on, but isn't that common practice in a rock opera?). To be honest Hugo is a self-obsessed prick; this is really his story, how he pulls his head out of his--sorry, himself out of his abysmal sense of self-pity, realizing that not only his wife but his country need him.

And it isn't just that Hugo (Les Miserables much?) is Diaz's idealized poet-warrior slowly undergoing a political awakening; the long hair fringe beard and mustache suggest an autobiographical sketch, Hugo's mix of righteous idealism and brooding self-destructiveness being Diaz's way of criticizing not Duterte's narcissistic machismo (that's what Chairman Narciso is for) but his own more artistic kind of narcissism, his own more intellectual kind of machismo. The Tenyente puts it bluntly to Hugo: "your kind of words and verses are useless in a dumb country." Could Diaz be anticipating the antipathy with which his work will be received by fellow Filipinos--perhaps accepting it with masochistic resignation?

Shaina Magdayo's Lorena is Hugo's polar opposite: bright where he is dark, fearless where he pauses and ponders. When menaced by soldiers she matches their energy with her own, a fiery little flame of conscience that questions the powers that be, though not her own undoubting self. When she's captured and tormented and forcefed an unidentified drink something interesting emerges, a more wanton sensual self. The song sung during this difficult-to-watch scene is titled 'Talampunay Blues' which is suggestive: talampunay is a beautiful tubular flower that hangs upside-down and is often called, alternately, 'angel's trumpet' or 'devil's trumpet;' stories of its effects range from mild hallucinations to insanity, mind control, death (it's difficult to find authoritative info). Could the drink have made her susceptible to the soldiers' will? Or could it have released something inside her, something she'd kept hidden under all that goodness and unimpeachable marital fidelity? One thinks troubled, troubling thoughts, and keeps them to oneself.


The songs are lovely but lose considerable power when translated to English subtitles (Pag-gising mo sa isang umaga / Walang kasamang nakaabang / Walang kaibigang naghihintay / Nauulila ka sa iyong pag-iisa (One morning you wake / with no one to welcome you / Not even a waiting friend / You're orphaned in your solitude)--not only is the rhythm stronger in the original but the Tagalog is more intense, more specific, captures a more pungent flavor of loneliness. Worse is having them written out instead of sung--you lose the performer's emotional delivery, above all Bituin Escalante's wonderful Kwentista (Storyteller). Most of the voices range from adequate (Pascual's) to professional (Magdayo's, Amador's); Escalante's soars like a kite in a stormcloud sky. Felt like I could listen to another four hour of Diaz's songs sans instruments easy, if and only if Escalante were willing to sing them to me.

Folks have noted the repetition. There may be obvious reasons (a form of insurance that information--a plot point a character's emotions--is clearly delivered, a lavishly indulged convention of the musical or opera)--but I submit there are at least two more: that constant reiteration represents the present-day style of discourse, two people with opposing views yelling the rightness of their position over and over again at each other, loudly; and that it emphasizes and reinforces the cyclical nature of history. Words lyrics entire lines of dialogue are repeated over and over; tyrants are exiled only to come back decades later in more virulent form; ideas are crushed only to spread roots underground and sprout up again elsewhere.

Repetition you might say and reflection: Hugo Haniway reflects his maker; Chairman Narciso reflects Marcos and Duterte. Hugo's passivity and self-absorption reflects our own--"When," you want to ask "Is he going to do something?" When are we?

The film ends (skip the rest of this paragraph if you haven't seen the picture!) with The Tenyente inflicting her cruelest most cunning humiliation on Hugo, in the form of a revolver. Hugo pushed and tortured as far as he can go is given a choice: to honor his word and (in The Tenyente's perverse terms) honor the memory of his raped and murdered wife; or toss all notions of honor aside, pick up the revolver, get to work. For all its nihilism it's possibly Lav's most hopeful and at the same time most horrifying conclusion, offering its protagonist--offering us in effect--a chance to continue suffering. More, the film seems to suggest that if (as the old adage goes) the prey's strength and cunning is shaped by the strength and cunning of its predator, then Marcos (and now Duterte) do serve the Philippines in their own monstrous way, as its predator-in-chief, bludgeoning down the strong and gobbling up the weak till some point some time someone stands up and says 'No!'
A harrowing film despite its severity its leisurely pace, and an important one for dealing with the creatures in our midst. Easily one of the best of 2018. 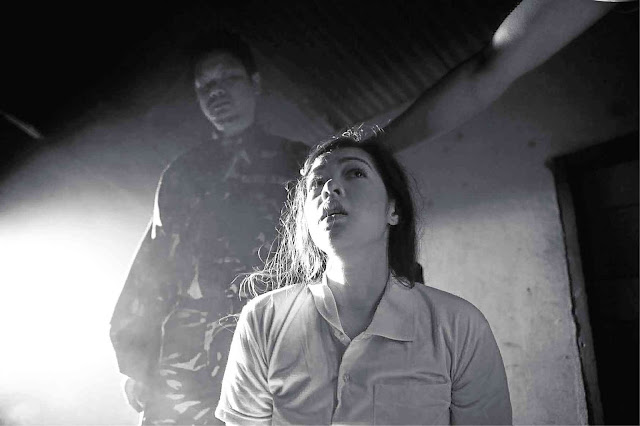