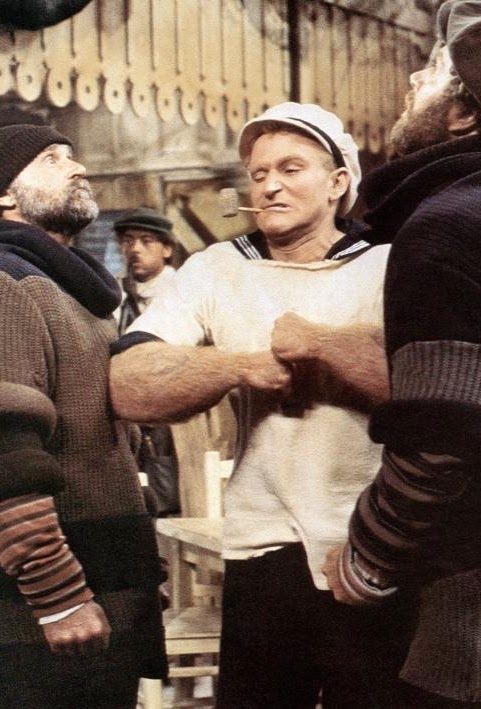 Robert Altman's Popeye opens with the tinny monophonic sound of The Sailor's Hornpipe segueing into Sammy Lerner's theme song (I'm Popeye the Sailor Man). We see the cartoon image of a ship's rear cabin, doors sliding open, the classic opening of many a Max Fleischer cartoon short; Popeye pops up, chuckles, exclaims (in stereo and in the voice of Jack Mercer, who played the sailor from 1935 to 1978):

"Hey what's this, one of Bluto's tricks?" 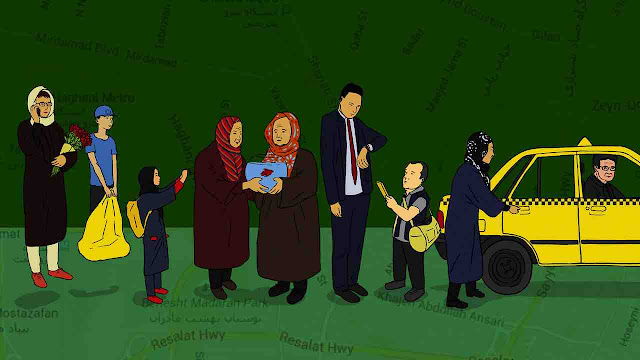 Jafar Pahani's Taxi would be remarkable just for existing--it's the third feature the filmmaker has done since the Iranian government prohibited him from directing and writing for 20 years (Aside from the ban he may or may not serve a 6-year jail sentence--the possibility hangs over his head like a constantly raised ax). 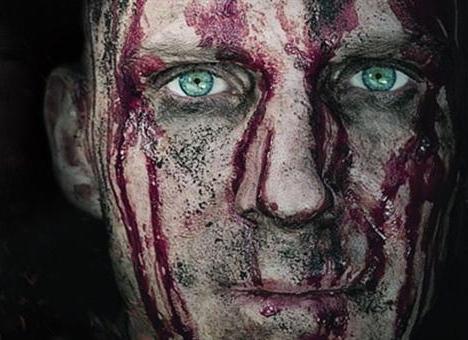 
Ralph Fiennes' Coriolanus is a lively and intense adaptation of an obscure Shakespeare play--especially obscure, considering this is the first-ever attempt to deliver it to the big screen.

There's probably a reason for the neglect--Caius Martius (dubbed 'Coriolanus' after his conquest of the Volscian city of Corioles)--is an unregenerate bastard, a highborn military career officer seeking election to high office who looks down upon ordinary men, claiming their breaths “reek o'th'rotten fens, whose loves I prize / As the dead carcasses of unburied men / That do corrupt my air.” Asked to display his battle scars to the public--a Roman tradition when campaigning--he puts down the wounds as mere “Scratches with briers / Scars to move laughter only,” and declares “I would not buy / Their mercy at the price of one fair word.”

Trying to get the bad taste of Zack Snyder's latest out of my mouth I took a peek at arguably one of the worst if not the worst entry in the franchise, Superman III--y'know, the one with Richard Pryor on skis flapping a pink cape. 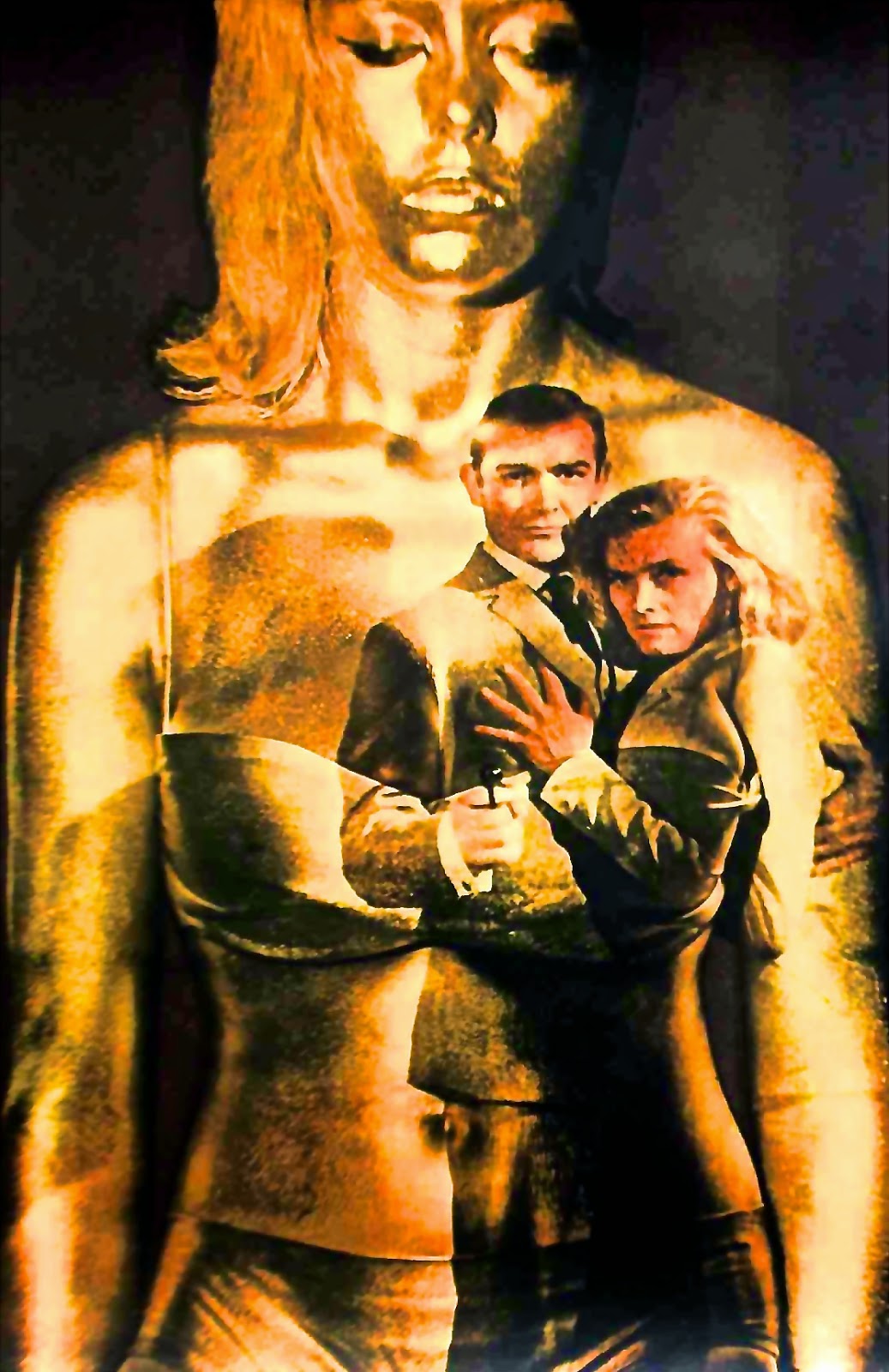 (Needless to say, story and finale discussed in detail here)

Not really a big fan of Sam Mendes--thought American Beauty a plodding, watered-down version of Blue Velvet, thought Road to Perdition a pretentious if handsomely shot adaptation of the graphic novel. Mendes has talent, but it's difficult to get a read on him as a filmmaker--there isn't much of a distinct personality, visually or emotionally speaking.

Which makes it a pleasure, I suppose, to say Mendes has finally found his metier, as an above-average director of Bond films.

How good is the first three-fourths of Dan Trachtenberg's supposed sequel to Matt Reeves' popular monster movie? Let me put it this way: it makes one bitterly regret staying for the film's last fourth; it makes one forget the fitful cleverness of the first picture; and it makes one reject the redemptive tone of Lenny Abrahamson's more conventionally dramatic film of similar premise, screened in American theaters last year. 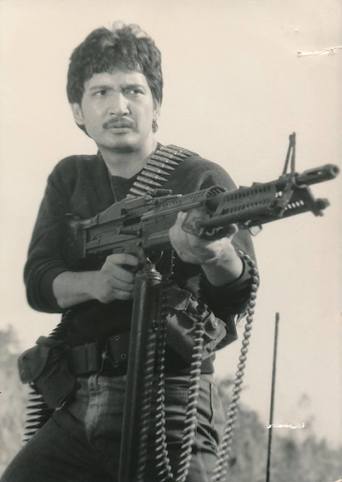 Filipino film enthusiast and fledgling documentarian Andrew Leavold's The Last Pinoy Action King, his sophomore feature, doesn't have the bizarre vibe of his The Search for Weng-Weng--doesn't feature at its center a three-foot-plus strangely charismatic enigma, who remains a cipher by film's end but whose story has at least been given a good going-over. No, Leavold's subject this time is a hardworking, undeniably pretty, quietly charismatic action-movie star with bona-fide boxing skills, a relatively low-key personal life, and no real scandals to speak of.

Fernandez made a career of what assets he had--in terms of popularity if not boxoffice* second only to the inimitable Fernando Poe, Jr.. Leavold apparently took his cue from Fernandez and serves up a meat-and-potatoes documentary, no artsy-fartsy frills (though at one point he does use jittery video footage to suggest hopelessly blinkered love), just a story simply told.