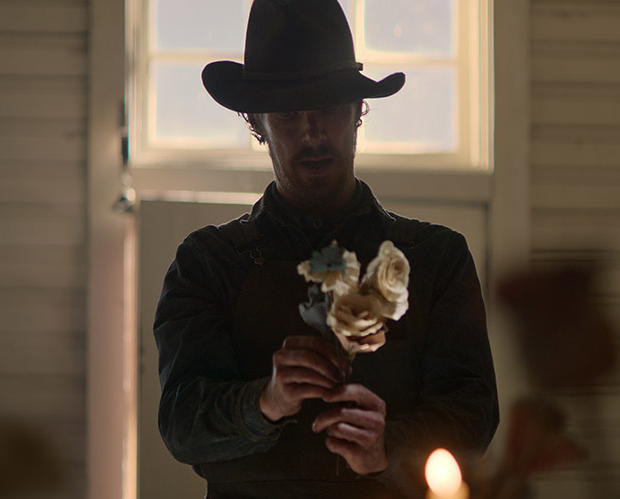 Power of the perverse

(Warning: some hints and suggestive talk about the film's narrative twists)

Jane Campion's latest-- her first feature in eleven years-- is hailed as one of her finest yet; high praise considering, for the director of Sweetie, The Piano, Bright Star, Top of the Lake among others.

But where previous films have a strong feminist flavor this time Campion has decided to tell a story (Thomas Savage's '60s novel) with more testosterone. Enter the Burbank brothers Phil (Benedict Cumberbatch) and George (Jesse Plemons); George is more thoughtful and conscientious, Phil more domineering-- he calls George 'fatso' and humiliates poor Peter (Kodi Smit-McPhee) for being effeminate, driving Peter's mother Rose (Kirsten Dunst) to tears. Talk about unintended consequences: George in apologizing to Rose falls for her; Rose enjoys a small revenge by entering the brothers' house as wife and mistress. Phil does not take this affront lying down; with lasso in one hand and banjo in the other he proceeds to do his level best to make Rose and Peter's lives a living hell.

Phil doesn't lay so much as a finger on Rose but his campaign is relentless: Rose crumples under the sustained assault. Peter receives his share of mental abuse but where Peter looks more delicately wrought he's apparently made of sterner stuff, bending under Phil's insults but not quite breaking.

Campion films in immaculately lit precisely framed compositions that emphasize the sprawling landscape surrounding the main principals-- everywhere you look you're open to attack from any direction, not to mention sky (I'm thinking a squadron of biplanes, or a flock of Hitchcock's seagulls); inside the mansion the brothers live in the rooms feel numbingly silent, tomblike, cold. This visual scheme doesn't leave many inviting options for the adventurously inclined; if anything one's impulse is to cling to one another, no matter how one may feel towards the other. The cowboys horseplay or get drunk; George is driven to seek out Rose, who responds accordingly; Peter clings to his mother's skirt; Phil-- well Phil slathers himself with mud and washes it all off in the river.

It's a western without much gunplay, a psychological thriller paced slow as a grazing horse, a drama where the gasfed flames of conflict are turned deceptively low. Benedict Cumberbatch's Phil threatens and fumes and at one point strums arguably the most taunting onscreen stringed instrument since, O, Deliverance-- but there's something not quite kosher about the man; as Anthony Lane puts it he's "a master of urbanity... not quite home on a range." Belittling words, but unintentionally perceptive: Phil is a bit of a fake, a fiercely intelligent Yale graduate with musical talent despite his taciturn demeanor and macho stride; he learned his skills at handling horse and steer from one Bronco Henry, who he reveres as his mentor. If his bellicosity feels like bluster, if his drawl sounds misplaced, that may be because he's performing in more ways than one.

Phil isn't the only fraud here: George may sound more cultured but doesn't have a college degree; the surrounding countryside may spread out vast and green but this isn't Montana it's New Zealand; and Campion may seem to be doing her first Western, a polemic against cruel homophobia and toxic masculinity, but I submit she's after more elusive fish.

That fish may be the nuggets of information Peter uncovers over the course of the film-- the bits of evidence that indicate just how intense Phil's hero-worship of Bronco Henry really is, the melancholy that clings to Phil and say he may be a victim too. When Phil does a 180 degree towards Peter, your first thought is: this is some new tactic Phil has adopted. Second thought: this is what Bronco Henry once did, years ago. Third: this is a wounded soul sending a guarded plea to another. One or the other or any combination of the three.

Which colors the rest of the film; one expects from all the simmering tension a violent confrontation a la The Piano; what one gets instead is a dissolve into more ambiguity and silence-- frustrating I suppose but Campion likes to upend even pervert convention, and I usually like filmmakers who like to do that. Yes Peter defends his mother and exacts revenge but Cumberbatch's Phil is such a complexly textured character you feel his unhappiness at what he once was and what-- out of fear of his fellow cowpunchers and their possible derision-- he has forced himself to become. You feel the self-hate radiating like a fever from him as he bullies Peter over and over again, with the intensity of one emotionally involved. And you may (or may not, not everyone will respond to what Campion is trying to do) mourn the loss of what could have been, and Phil's possible redemption.

Campion leaves us with the boy sitting in his room, then standing up to gaze thoughtfully out the window at his mother and adopted father-- or just at his father? One looks and one feels some measure of hope for this newly strengthened family, with a stray thought that George better treat Rose well, for his sake. 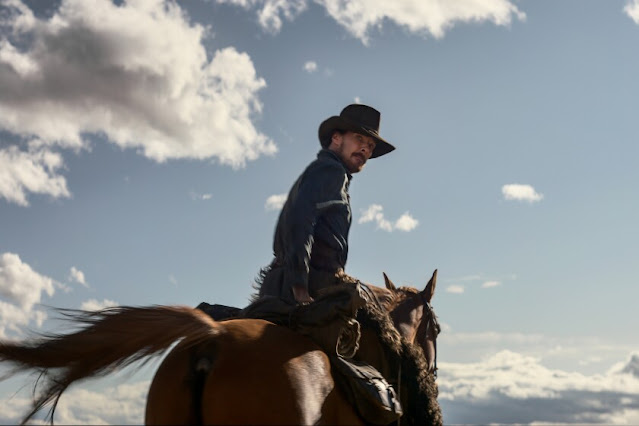 SPOILERS:
Found the film extremely off-key. Wrong director, wrong lead actor and a baffling narrative probably better as a novel. I think everyone can agree who has seen this film that the young man Peter does indeed intentionally kill the old cowboy Phil. And gets away with it. Why? To please his mother and protect his family? Okay, fine.

Then why introduce the homosexual element into the story? That confuses things. Then the story takes on an entirely different trajectory and the murder takes on a whole other meaning. Did Peter kill Phil because he feared that he would become him? And by become him I mean, an embittered angry sadistic latent homosexual. Is Peter himself a budding homosexual who realizes the only way to survive in 1925 Montana is to eliminate temptation? I don't have a problem with any of these choices. What I have a problem with it is that it's all very vague, either purposefully so or the authors were intimidated by the nature of it being perceived as an anti-homosexual narrative.

Remember the whole film turns once Phil starts treating Peter with kindness, which doesn't appear to be authentic but a ruse to lead Peter into something. I think it's clear and one can assume that something was the same dynamic Phil had with Bronco What's His name. So this unrealized homosexual relationship is central to the ending. I tend to believe the filmmaker was too timid to make some clear-cut decisions to define the motive behind the killing. Though there is some evidence to show Phil was killed by Peter because of what Peter saw as a threat to his sexuality. But Peter's sexuality is vague. When Peter asked Phil the question "Naked?" it's extremely pointed and proves that Peter has been harbouring suspicions. Then Peter not only kills Phil, but really thinks it through and plans it. The murder is deliberate and calculated. Then the director closes out the film with Peter looking upon his mother and step-dad. Uh, no. There's a lot more going on here. Is Peter a homosexual? If so, that would be an interesting component to explore as to why a younger gay man in that time would not only rebuff advances but calculate a murder to eliminate that man. Was he straight? If so, that means Peter killed Phil because he saw him as a direct threat to his heterosexuality. But Campion leaves it blank because she thinks "The Power of the Dog" is "Death In Venice" but it isn't. Not even close.

What I sketched out in the article is that Campion based her script on Savage's novel, which she apparently follows faithfully except for one deliberate point, and that deletion hints at her intentions. She took out a prologue where Phil beats Peter's father, resulting in his death, and this makes it clearer why Rose is so frightened of Phil, and why Peter would take revenge.

Taking out the prologue I'd say leaves it that much more an ambiguous dance. Is Phil gay? Possibly. Is he a victim turned ardent worshipper of Bronco Henry? Possibly. Is Peter gay or effeminate? Possibly. I delight in all the possibilities teased and left unanswered. It's not Death in Venice where the stakes are clear and intensified to the point of opera, more like Antonioni where you can't even be sure what happened, and why.