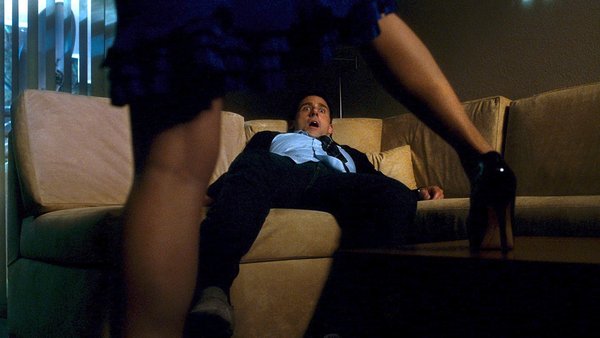 She's too hot for him (and should really be looking at me, instead...but I digress...)

What to say about Jon Favreau's Cowboys and Aliens? Like Samuel Jackson's Snakes on a Plane (2006), what you read in title pretty much what you get: hard-riding Western folks battling fanged-and-clawed extraterrestrials. Like the movie or not, you can't accuse 'em of false advertising. Unfortunately.

Story begins with Jake (Daniel Craig) waking up in desert with big metal bracelet in one wrist and no memory. Arrives in small town, is accused of being an outlaw by townfolk, including rich cattleman named Dolarhyde (Harrison Ford) who accuses Jake of robbing his gold. Matters reach state of tumultuous furor (well--bubbly fizz) when aliens arrive in what look like giant metal dragonflies, use hi-tech lassos to snatch people off the ground and carry them away. Plenty folk taken, including Dolarhyde's son Percy (Paul Dano); Jake and Dolarhyde ride out together to try bring 'em back.

Forgot to mention: Jake meets Mysterious Woman (but aren't they all?) named Ella (Olivia Wilde). Doesn't add much to party 'cept when she dies body is thrown into bonfire, resurrected, walks out of flames in her altogether. Wilde perfectly suited for last part, but that's about it far as entertainment value concerned--she can't even strike sparks off of flinty Craig, who has apparently decided to glower for rest of the picture (why, I don't know--artist's expression of aesthetic disapproval over putrid production, perhaps?).

Granted both played by Harrison Ford and Daniel Craig, who are capable of good work, and Paul Dano who, in films like There Will Be Blood (2007), shown to be capable of more than good work--but what they doing in this piece of cow flop? Favreau set up expectations; proved that with good actor could come up with something watchable, if not enjoyable. Craig under Favreau seems to be phoning--no, telegraphing in (phones not invented yet). Plays cool cowboy same way he plays cool secret agent: stoic, not a little stolid. Ford warmer, perhaps livelier than in last few pictures: here plays what is ostensibly called 'bad' guy, or nasty customer not adverse to tying man between two horses. Meanness mainly show, of course (Dolarhyde cuts man loose from one horse); when this becomes clear movie collapses to ground with soft whispered 'pffft!'

Dano--as said terrific in There Will Be Blood--mostly wasted here. After playing dissipated youth in movie's first twenty minutes, is captured by aliens and kept in storage for most of picture.

Isn't as if Favreau were hotshot action filmmaker. Fight sequences in Iron Man movies never high points; high point was always Downey fooling around, trying to bring comic-book character to life (with Gwyneth Paltrow lending touch of rom-com frisson to proceedings). Given title like Cowboys and Aliens expect decent action sequences, but these look secondhand, as if borrowed from sources of not much higher quality (this year's incomprehensibly shot and edited Battle: Los Angeles; Neill Blomkamp's 2009 District 9; and--thank you much for reminding--Roland Emmerich's ridiculously overblown, just-as-if-not-more-so derivative Independence Day (1996)).

Keep thinking: Howard Hawks could've done this in his sleep. He master of western genre, knows how to shoot horses riding across Arizona landscape, knows how to stage gunfights, how to get maximum dramatic and comic mileage out of even halfway talented actors (and actresses). Hawks knows when odds are too one-sided how to even 'em up, in inventive and entertaining ways (thinking of literally explosive finale to Rio Bravo (1959)); even has experience in directing alien invasion pictures, albeit on small scale (The Thing From Another World (1951)). Hawks know how to apply special effects (as little as possible), how to stage, shoot and cut action sequences (cleanly and coherently), how to have woman address man (saucily as possible, to provoke not just man but all males in audience). High art or low entertainment, Hawks would produce something that grab attention, or at least be watchable. He at least make girl saucier, instead of hot human body hiding wet noodle alien brain with nada personality.

Not stupidity of basic concept I object to--as suggested, Hawks could have done this in deep sleep, wearing pajamas--but laziness of execution of final product. Back to home planet from whence originate! 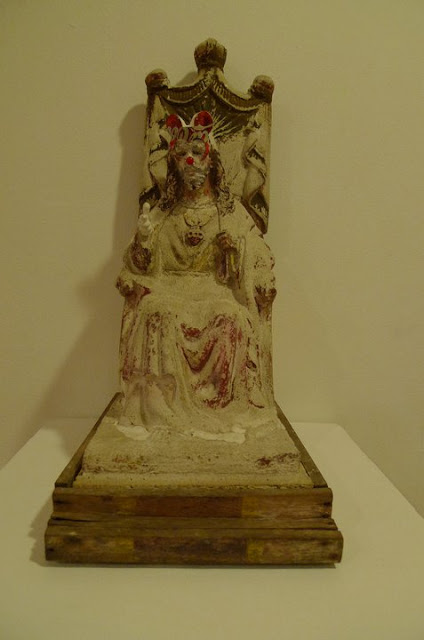 I'd been following the recent controversy over the 'Kulo' (Boil) exhibit over at the Cultural Center of the Philippines (CCP), from the initial news splash about Mideo Cruz's exhibit to the shitstorm that followed to the closing of the exhibit and resignation of CCP visual arts department head Karen Flores and the artists' response that followed, and I have this much to say:

Art should be free to shock. Art should antagonize. Art should shake up established norms and thinking and provoke discussion. Otherwise, what is it good for?

Mind you, I'm not saying that artists and the art they create should enjoy zero responsibility, or that they should be totally immune from all consequences; if they offend, why, the offended have every right to protest right back, to agitate, demonstrate, declare in print or audiovisual media their indignation. Viewers and readers have every right to stake out a position and loudly agree or disagree, to boycott or even picket the exhibit's entrance. That's a right too, every bit as important as the artist's to freely create.

You can even attack the work from an aesthetic point of view, criticize not the artist's morals or intentions (which are irrelevant anyway) but his skill, as Lito Zulueta does in an Inquirer column. Of all the protests against Mr. Cruz, I find Mr. Zulueta's piece the most persuasive.

Artist act; viewers react. That's what is known as dialogue, the discourse between two opposing views (for an equally if not better reasoned and well-written opposing view, check out Luis Teodoro's thoughts on the matter). Dialogue is a good and healthy thing; what isn't healthy is when the dialogue is silenced, the discourse interrupted, the exhibit closed down, and an atmosphere of threats and fear pervades. When you can't see what the fuss is all about, you can't talk about it; when you can't talk about it, you forget, and perhaps stop talking (or you stop talking because you're afraid to continue).

Mr. Zulueta's article condemning Mr. Cruz's artwork is a good thing; it's two opposing parties responding to each other (or at least one responding to the other--far as I know Mr. Cruz has yet to reply to Mr. Zulueta). Congressional leaders demanding that the CCP budget be cut and worse, cyber terrorists threatening violence and death are not a good thing; they encourage silence and fear, and silence is a friend of censorship, and censorship as an active and consistent policy is in turn an essential condition to foster and maintain dictatorships throughout the world.

Not saying the Philippines is presently a dictatorship--far from it. But from here to September 21, 1972 isn't so much a distance of some thirty-three years as it is a distance of some three to four inches--roughly the distance a pen has to travel to write someone's signature onto a document declaring martial law. And all that was needed to send that pen scribbling over those three inches was a decision on the part of one man, and enough people behind the man to enforce his signature, the document, everything that followed. If it takes a handful of men deciding to act to send the country spiraling down a toilet bowl for fourteen years, how many will it take to repeat what happened today? Starting with the right of free expression? Not much, I'll wager. Not if we keep silent, do nothing, let them have their way with us.

Am I making sense? Is this too much of a leap I'm taking, are the dots I'm connecting too far apart and crazy? That's for you to decide. Discourse and dialogue, not silence and forgetting. If you disagree with me, let's talk--but for god's sake, please don't stay silent. 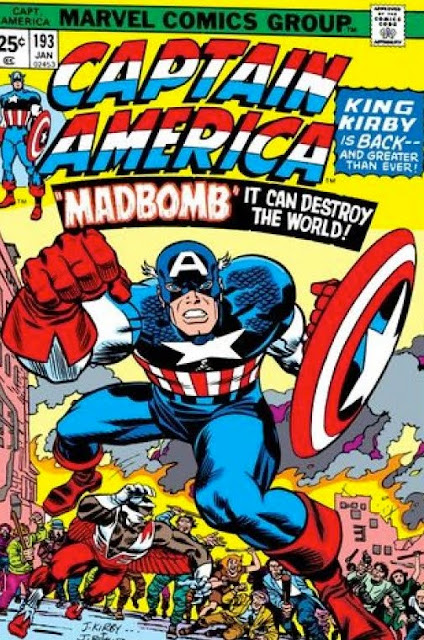 We don't need another hero
Joe Johnston's Captain America (there's more to the title, only I'm not that motivated) is fairly decent entertainment--moves at a lively pace, has a nice retro look, (circa late '30s to early '40s, complete with Unisphere and the 1939 World's Fair somehow teleported from Queens into Brooklyn), even surrounds itself with a royal flush of vivid supporting performances. Like its newly minted star Chris Evans (who plays the eponymous officer), the picture is a well-made example of standard-issue factory product, and just about as exciting.
Read more »
at 11:02 PM No comments: