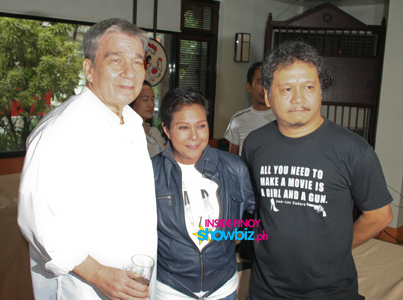 Best of the year, arguably (Part 2)

Then Alfonso accidentally wounds Angelo, and is wracked with guilt; Andrea is abandoned at her wedding, and the mayor's steely facade suddenly shatters; Lucia berates Pepe for his secret trysts. The villains show different sides to themselves, are suddenly made more human to us. It's not magic; we are merely shown their hidden reasons for being who they are. Alfonso (the volatile, intensely watchable Alwyn Uytingco) does what he does partly because he hates Elena for supplanting his mother; Andrea (Nadine Samonte, who as an actress seemed dull and inadquate, but ever since her failed wedding has stepped the intensity up considerably) is all about ambition, but is not beyond being hurt. Lucia (a variation on 'Lucrezia,' not to mention having some assonant resemblance with the name 'Imelda') for all her venom and hate genuinely loves Pepe, and will do almost anything to keep him and her daughter. An especially lovely scene has her and her lover--a trusted flunky in the Deogracias family--asking him for details: is Elena a good person? Do the children love her? Was she happy with her husband? We realize that she's trying to compare notes, trying to find out just how much better the homelife of the competition is, just how utterly she has failed as wife and mother.

We learn that those who fight on the side of angels have their own warts. Angelo the dully perfect police officer hero seems to be playing Carmela against Elsa, and refusing to entertain only one girl. Pepe--possibly the most richly written and ambiguous of characters--is emotionally unfaithful to his wife (who to be fair can hardly be considered the model for marital fidelity). Pacita shows a bit of temper (Alfonso who loves Pacita and not Elena, who treats the younger sister as his adopted mother, seems to have inherited this trait, though the two are not blood relatives). Even mild-mannered Elsa shows fangs, as when a death in the family causes her to assault an innocent visitor--to Deogracias or Ilustre family is all, though Elena the elected official may insist otherwise.

One cannot entirely escape one's instincts, however; in the final minutes of the final episode of this week Elena, backed into a metaphorical corner, decides: “We need Alfonso.” Even if he's a refugee from the law guilty of any number of crimes she can't ignore family, not always, not entirely.

Saint Elena has her less-than-saintly moments, and a good thing too--adds dimension to her character. She can seem insufferably self-righteous, constantly demanding that people live up to her high standards, and it rubs others the wrong way. She doesn't seem at all familiar with the idea that politics is the art of compromise (a crucial survival skill). And there's this: just before Andrea gets married, Elena is visited by Ramoncito. Not a long visit, but long enough for Elena to have a heart-to-heart talk with him. He abandons Andrea at the wedding aisle shortly after.

Did Elena poison Andrea for her future husband? The question she asked--if Andrea really loved him--wasn't she aware of the possible effect those words would have on him? Granted we saw the exchange, and we could clearly see that Elena was talking out of sincere concern--isn't that the best, most unimpeachable way to strike at one's enemy, from a position of moral superiority? Suddenly Elena doesn't seem all that innocent; suddenly she seems more capable, more believable as governor, and you wonder if maybe not all the accusations Andrea, Alfonso, and Lucia have leveled against her are blatant lies.

Directors Mario O'Hara and Jon Red, working on scripts by Dinno Erece, Jerry Gracio, Benedict Mique, and Pamela Miras, have in effect re-told Philippine history of the past thirty years. The Deogracias and the Ilustres, like the Aquinos and Marcoses in real life, come to represent Filipino society at its worst and finest, a trick of perspective O'Hara has used before in his noir masterpiece Bagong Hari (The New King, 1986), where an alternate-history province stood in for the real Manila, its classy governess for Ms. Marcos (who at one point was governess of Metro Manila),  its often baroque and at times unwatchable violence lifted directly from anecdotes of the era.

Television is reportedly a writer's medium, and the aforementioned writers did an astonishing job, telling the story of around a dozen characters over a period of several months (not an especially wide scope, but the level of detail involved is intimidating); it helps that O'Hara doesn't attend the story conferences developing the plot lines but does rewrite the script when it arrives on the set, helping keep the dialogue effective and real (or as real as possible within the confines of melodrama). All that said, the two directors helming the project do an amazing job of keeping the series visually distinct. O'Hara's classic style (John Ford by way of Gerardo de Leon) makes for an interesting contrast against Red's young-punk style (Leone by way of Johnny To, I'm guessing, with the occasional homage to Paul Greengrass). Red deals mainly with the younger cast, and his restless, flashy camera reflects their restless, flashy acting style; O'Hara's stoic understatement, on the other hand, perfectly complements Aunor and de Leon--in their scenes together you sense a serenity and quiet intimacy that comes from years of having known each other, worked with each other, at one point even loved one another.

Best television you're likely to see this year? I don't know; I haven't had a chance to watch much Filipino TV (asking around, people do tell me it is). I can say this much: it's the best storytelling I've seen this year to date, and that includes everything released this year on the big screen--Hollywood, independent, international.

The series continues for one more week in October at TV5; the previous episodes are available for online streaming (there are roughly ten episodes to catch up with). If you're at all interested in what Aunor or O'Hara (arguably the two finest Filipino artists alive, in their first major collaboration in over twenty years) are up to, or if you only want some sharp and intelligent storytelling--in this case an imaginatively entertaining re-telling of our history of the past three decades--you could do worse than to watch this. Highly recommended.