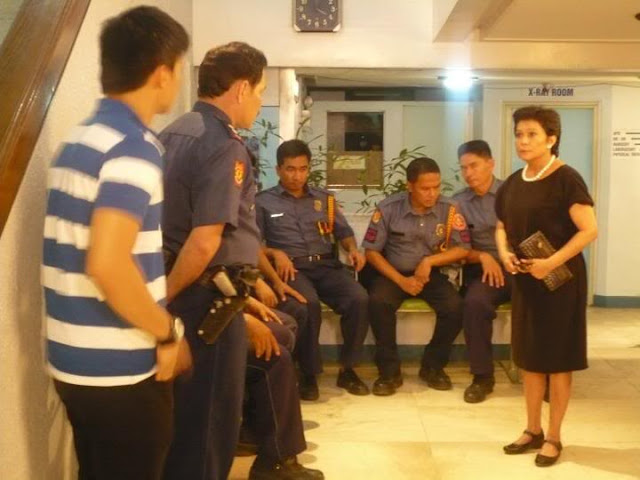 Best of the year, arguably

It had been some time in the making. Nora Aunor, on self-imposed exile for something like eight years, was rumored late last year to be coming home. The rumors persisted for months, to the point that no one quite believed she would be flying back till she actually stood there in August, on Philippine soil.

Things moved fast after that; TV5 had a deal with her to do a miniseries, or in the local jargon a teleserye; Mario O'Hara was rumored to direct. A large cast was assembled; this was TV5's first attempt at such a creature, and they apparently were to spare no expense. About a month before its October broadcast, Jon Red was attached to the project as co-director. Unlike other similar efforts, this apparently was to end after a month--it would come, introduce its storylines, and end. No extensions, no outstaying its welcome (the main reason why quality drops, apparently,).

The series opened October 3 to loud media fanfare; it was to be nothing more and nothing less than a sprawling political melodrama, not unlike--well, it's difficult to think of something, anything, it even remotely resembles. I remember hearing of Peque Gallaga's Cebu back in the '90s and in the mid-2000s--the shows were reportedly memorable for the dialogue, acting, production design (most if not all of Gallaga's films have excellent production design); I heard of Chito Rono's Davao, which does for that southern city what Gallaga's does for Cebu. Both are oft compared to Dallas or Dynasty--well-written potboilers done in high style.

Politics often lightly touches Filipino melodramas, and occasionally there'll be a character running for office, but never to my limited knowledge has an entire series been devoted to an election and its elected official's subsequent administration. One thinks not of Dallas, but of Altman's Tanner '88--sophisticated satire where Altman veteran Michael Murphy poses as a political candidate that, in his deadpan seriousness, comes uncomfortably close to resembling the posture of actual candidates (what's pose and what's real then?). Sa Ngalan ng Ina on the other hand is a full-speed-ahead melodrama, all tears and screaming and hair-pulling mixed with backroom intrigues and lurid affairs, plus the occasional assassination attempt. A garish mix of pathos and the grotesque, the Ringling Brothers and Barnum and Bailey Circus crossed with a small-town fiesta--much like a real Filipino-style election, when you think about it (the series' spirit if not tone connects it to Altman's work more than might be expected).

The series won high praise, but only modest ratings--it didn't pull in the general audience. Watching it, you wonder if it ever could, or was even meant to. Politics despite its tendency to inspire eccentric or even obsessive behavior, has never been popular television fare in the Philippines (or anywhere else, actually); leastwise, people seem to prefer practicing than watching it. For all its plot twists and tearjerking moments, this teleserye does keep a careful eye on the actual politics, the endless fundraising and shifting alliances, the nuts and bolts of administering a local government--one subplot involves the siphoning of provincial treasury funds into a rice stockpile; another traces money meant to buy farm equipment handed over to local mayors.

The series is different because it's about something--the struggle between rival political dynasties; how personal life affects public life; so on and so forth. TV audiences possibly aren't used to this much substance and complexity in prime time--it whizzes over their heads. Or rather, I suspect, it doesn't; they know exactly what's going on. They've seen too much of the shenanigans of real dynasties (the Aquinos, the Marcoses, the Macapagals) to want to watch it realized, however brilliantly, on the small screen (call it “The Tanner Effect”--low ratings due to inspired mimicry).

The first week followed a classic story: aspiring gubernatorial candidate Amang Deogracias (Bembol Roco) is assassinated under orders of Lucia Ilustre (Rosanna Roces), wife of incumbent governor Pepe Ilustre (Christopher De Leon); Amang's wife Elena Deogracias (Nora Aunor) runs in her husband's place, and wins the election. The story is fairy-tale fantastic (a housewife for governor?) and by all rights laughable, only it closely follows the actual career of Corazon Aquino, who ran in place of her husband Ninoy against arch-rival and long-time president Ferdinand Marcos (alongside his infamous wife Imelda), and won. Aside from transposing national events to the size and scale of provincial politics (the province of Verano standing in for the Philippines, the town of Salvacion standing in for the country's capital Manila, the office of governor representing that of president)--so far so faithful.

Then the real creativity comes in. Elena has to run her administration the same time she has to administer her four children: stepson Alfonso (Alwyn Uytingo), a hotheaded drug lord; younger stepson Angelo (Edgar Allan Guzman), a police officer; stepdaughter Andrea (Nadine Sarmonte), a local mayor, and Elsa Toribio (Eula Caballero), Elena's daughter out of wedlock. Alfonso is arrested under Elena's orders, and escapes with the help of Andrea; Elena orders a manhunt for Alfonso and an investigation of Andrea, earning their unending enmity.

Angelo and the Ilustre's only daughter Carmela (Karel Marquez) are sweethearts, though Elsa is also in love with Angelo; Andrea plans to marry Ramoncito (Joross Gamboa), who pretty much acts like her heroic manservant / wash rag. Lucia despite being married is conducting an affair--her husband Pepe is paralyzed from waist down, and is confined to a wheelchair, unable to perform his marital duties. Of all the major factions Elena stands alone, with only her daughter Elsa, her younger stepson Angelo and her sister Pacita Toribio (Eugene Domingo) giving moral support and (on Pacita's part) the occasional commonsense advice; against her stand Pepe and Lucia's politically powerful family, two of her own children (Andrea and Alfonso) with their own respective groups and resources, and eventually her own political party (investigating fellow party members for corruption (the farm equipment scandal) did not win her friends). With her is a secret ally--former governor Pepe Ilustre, who as it turns out was Elena's former sweetheart.

The situation is akin to housewife Cory running against the Marcoses' powerful political machinery, only Ferdinand has been harboring a secret crush on her all along. The idea seems to play off on the implausible nature of Filipino politics, where personality counts far more than policy, a man's ties--social, familial, amorous--and not his time or actions in office define him, and theater--a good storyline in particular--is all. Your stepson a drug lord, your other stepson a cop? A former lover your secret ally? Why not? We're taking Filipino politics to the next level: politics  intensified, to the speed and complexity of television melodrama. Call it Filipino hyperpolitics.

Likewise with the characterization. Many of the characters' names are thuddingly obvious--'Angelo' for for what seems to be the province's only good and honest cop; 'Dorinda' (a 'komiks' name if ever there was one, usually a villainess at that) for Elena's vice-mayor; 'Deogracias' meaning 'grace of God' (Elena is only a novena short of sainthood status, it seems). For the first week all the characters play classic types: Alfonso is a hot-headed wild card, Andrea a bitchy manipulator; Lucia is a larger-than-life villainess complete with cunning machinations and chilling monologues (there's a memorable moment where a man is tortured and killed and she sits in her vehicle not a hundred feet away, murmuring lazy sentiments about snakes, and the satisfaction of crushing their skulls underfoot). She's like a cross between Lucrezia Borgia and her immediate inspiration, Imelda Marcos (whose native-style gowns and high-seated hairbuns she deliberately imitates).

Next week: Best of the year arguably, next part