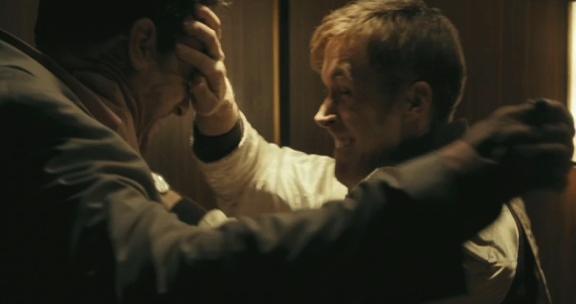 Notes on recent films and classics, and others in between:

The film avoids almost every cliche in sports movies, is the first sports movie I've seen where an actual overall strategy that makes sense is consistently used, as opposed to "hitting one for the Gipper" or somesuch heroic sentiment.

I liked it; I like the clever mix of video footage both archival and re-enacted, I like the overall low-key tone and obliqueness, I like the loose way Miller has with dialogue--the way people talk over each other, sit back and stare at each other in exasperation, have quite moments of interaction. I think Miller's got a magic touch with actors. Unusually perceptive commentator on imdb points out the sound ambiance in the film is unusually layered and complex. It does sound more like a documentary film than an ordinary mainstream film. Miller's first film, The Cruise, had a similarly layered soundtrack (I thought he kind of lost it in his second one, Capote, glad to see he's recovered here). I'd go so far as to call it the best mainstream movie of the year--considering Malick's isn't quite mainstream, nor is Drive, and I can't think of anything else off the top of my head. Well, there's...

Basically Outbreak for the intelligently levelheaded. Soderberg exchanges cheap thrills for coherence in this well-told, well-organized docudrama of a film that, far as I can tell, pretty much gives us the 'what could have been' of a serious epidemic outbreak, and how authorities would mobilize to deal with it. Two especially chilling points about the movie: this is what could happen if we were very, very lucky (many of the moves done by authorities are in fact based on government policies already in place); and I had to spend most of the picture trying to suppress a cough. I couldn't afford to deal with the stares from my seated neighbors.

Stylish for the most part; Refn shows a gift for staging intelligent car chases and action sequences. Where Drive sputters is in the romance angle--a bit of attraction to a neighbor a la In the Mood for Love, without Wong Kar Wai's swoony romanticism. Ryan Gosling is nicely self-contained, Albert Brooks a keen delight; Carey Mulligan and the usually fun Ron Perlman are distinctly wasted.

A remake in the truest sense, in that it takes off from Peckinpah rather than from the source novel The Siege of Trencher's Farm, Rod Lurie's remake borrows many of Peckinpah's shots, a good portion of his staging, whole swaths of dialogue, and for good measure, snips out every bit of business that made the original the outrageous provocation of a masterpiece it is today. Not just unnecessary, it's maddeningly, infuriatingly bland.

Incredible film, in that it actually made me pine for the Gubernator's laconic wit and subtle acting skills. The director shoots and cuts the action sequences from poverty, with plenty of ideas stolen from oh, Raiders of the Lost Ark, Temple of Doom, Once Upon a Time in the West, and Alien, among many others, not to mention you can tell that the budget was all spent on fake blood and prosthetic limbs instead of irrelevancies like a good script, or talented directors. The villain is forgettable, though his daughter does look hot in bald white makeup and extension claws. The 'pureblood' is hot-tish; nowadays it takes more than a pretty face to turn me on, it takes funny lines, delivered with at least an awareness of comic timing, timing the lead squeeze doesn't seem to have.

Rise of the Planet of the Apes

The best moments are Cesar's rise and assumption of control over the apes, the most chilling moment when the apes walk out of their cages and meet Cesar's eye, and you realize: this isn't a herd of primates, it's an army acknowledging their commander. The subplot about a virus taking over the world is far less persuasive--Outbreak redux, really? Soderbergh manages to present a more persuasive case (see above). John Lithgow is moving as the slowly fading father.

People call this a fantasy; I think it's one of the most sobering films I've ever seen. The overriding emotion pervading this three ring circus of a film is fear--fear of inadequacy, fear of mediocrity, fear of failure and of admitting to one's failure before the general public. This is the flip side of man's ability to fly high on imagination--at a certain point, you notice the ground far, far away. Fellini put a note on the camera, reminding him it's a comedy (he needs the reminder, it's such grim material), but it's not just a comedy, it (along with Keaton's Sherlock, Jr.) is one of the most beautifully photographed comedies ever made.

Is this Ron Howard's best-ever work? Not a great film, but it is a great story, and Howard almost but not quite ruins it. He's got the stylistic distinctiveness of a Big Mac, the melodramatic touch of an elephant, but when he sticks to the technogeek talk of the astronauts and their ground crew, the movie becomes compelling. Then he cuts to Kathleen Quinlan pining away back on Earth or to a CGI shot so flat and blatantly fake my teeth grind again. An almost tolerable two-plus hours.

Possibly Blake Edward's masterpiece, a sometimes comical, sometimes violent, mournfully tender film about two cowhands who decide to rob a bank. Not perfect--the bits that seemed borrowed from Peckinpah look exactly that, borrowed--but you might call this Edwards' reply to Peckinpah, that a film can be unflinching and still be concerned about things other than machismo and mayhem. Edwards has a surer, gentler grasp of comedy than Peckinpah (bits of the funny stuff in The Wild Bunch is hard to take), his view of his characters feels more rueful, more subdued (an arguably more difficult achievement I submit), is as densely textured and detailed as a Larry McMurtry western. The widescreen photography is not  shallowly gorgeous: Edwards has a gift for filling all that wide space with interesting compositions. 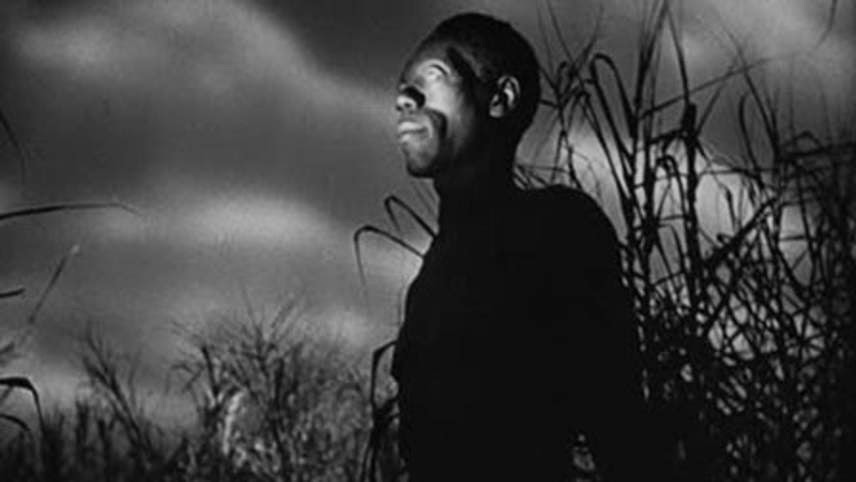 I Walked with a Zombie

Easily the most stylish adaptation of Jane Eyre ever made, Jacques Tourneur's quietly unsettling film answers the simple question: what if Rochester had never left the Caribbean--if Jane were to meet him there instead? In less than seventy minutes Tourneur's balletic camera describes a world of dreamlike languor and voodoo magic, a world where not just Rochester's wife but all the main characters are, in fact, only half alive, caught between passion's drive and society's demands. The film itself is equally divided in nature, alternating between long, beautifully lit and photographed sequences almost entirely without dialogue (Betsy's first encounter with Jessica, the trek to the Home Front) and monologues from people describing their struggle with passion's consequences with all the fervor of recovering addicts (Tom Conway, Edith Barrett). The ending has been described as abrupt; I can only call it inevitable, lyrical, breathlessly tragic. A great film.

In a Lonely Place

Reportedly when Ray translated the source novel to the big screen he did something altogether different: he ditched the serial killer angle, turned it into a more grounded drama. Maybe it's a condition of the times, but serial killers just don't do it for me anymore; they're cartoon villains, an easy answer when asking about the nature of evil (it's like Ultimate Evil is supposed to be Heath Ledger in clown makeup--can be unsettling for oh, ten minutes, then you want something more substantial). Funny how Ray turns proof of Dixon's innocence into a moment of high tragedy--not an easy feat, I would imagine. I admit, you do lose the intensity and terror, but for me making him NOT guilty is ultimately more unsettling. "Serial killer" would have been an easy answer for what he does; for Ray he's a man who has to live with himself and what he's capable of doing--and I say that's a harder fate than life in a mental hospital dungeon decorated with plexiglass. Sunset Boulevard--a contemporary, dealing with a similar milieu--for all its pleasures is a portrait of a grotesque; In a Lonely Place the monster can be any of us.

It's a Wonderful Life

The most supremely depressing movie ever made. Just think, after torturing George Baily for a day and confronting him with the prospect of a wrecked banking career, they send him to an alternate world for about twenty minutes, terrifying him short of shitting in his pants (The again who knows? The screen has no Smell-O-Vision). When they bring him back, he's so blubberingly grateful he accepts the miserable situation allotted to him for the rest of his pathetic life. All done in bright, Hallmark Greeting Card cheerfulness as only Capra can. Can you think of a more pessimistic ending? I'd say only Eyes Wide Shut comes anywhere close, and I don't think Kubrick has Capra's purity of intent and execution.

Sembene's hour-long first feature is, when you really stop to think about it, a deadpan comedy. She's a fish out of water, a nanny asked to move to Paris who on the day of her arrival is asked to work as launderer, cook, and live-in maid. Basically the girl and her employers spend the film talking past each other--she thought she'd grab the chance to enjoy a glamorous Parisian vacation, they thought they would save her life and acquire an all-around drudge on the side. The results are hilarious, but with hidden fangs.