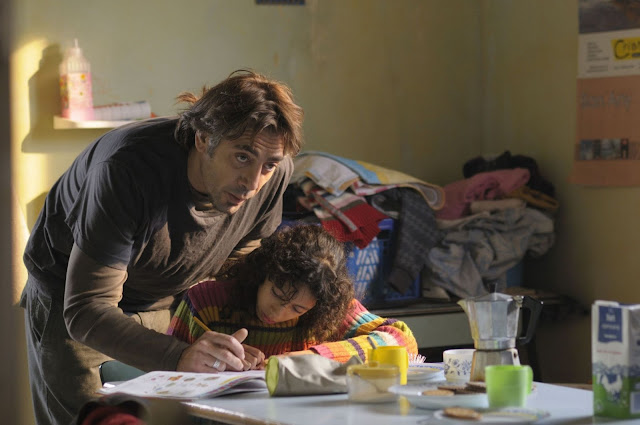 Alejandro Gonzalez Inarritu, one might say, does not do things in halves. He does not waffle; he does not prevaricate; when his films state something they do so declaratively, forcefully. His protagonists faced with the ultimate struggle do not go gentle into that good night--they kick a few garbage cans along the way, shriek their lungs out, and for good measure toss rocks through the back window.

Take Inarritu's latest, Biutiful (2010)--no; backtrack a bit. Inarritu has a tendency to employ multiple story threads in his movies: Amores Perros (2000) used a car crash to unite three separate narratives; 21 Grams (2003) used a hit-and-run accident (vehicular mishaps figure heavily in his pictures); Babel (2006)--his most ambitious work to date--follows four stories in as many countries, and does not involve a vehicle as a major plot element, though a bus rider is, at one point, shot.

With Biutiful Inarritu seems to have forsworn this tendency by focusing on only one protagonist, Uxbal (Javier Bardem), a single father raising two kids--seems, that is, until one looks at the protagonist's situation more carefully. Uxbal's wife Marambra (Maricel Alvarez) is an ex-drug addict and suffers from a bipolar disorder; he is torn between denying her the children and leaving them in her unreliable care. He finds jobs for twenty-five Chinese workers smuggled into Spain illegally; along the way finds himself concerned for a young woman sick with colds (she and her fellow workers sleep in an unheated basement). He sells drugs through a series of Senegalese vendors (also in Spain illegally) and is later saddled with the problem of caring for a Senegalese woman and her child.

Any one of these responsibilities would be enough to weigh down even the strongest men but no; Inarritu continues to pile on the poor man--Uxbal learns that he has prostate cancer, and that with chemotherapy he only has months to live; a friend urges him to put his affairs in order before he goes (duh). He also sees dead people (where did that come from--Shyamalan?) and at at one point has to tell a boy's father that his son was a thief.

It's at about this far in that you want to throw up your hands and yell “Okay!” Innarritu doesn't know when to stop; it's his most glorious virtue and most damning curse. The movie ranges all over the place, from urban hyperdrama to domestic melodrama to Twilight Zone supernatural; each narrative is accompanied by its own garish color scheme, each strains for its own memorable climax.

If anything in this escudella i carn d'olla--a kind of Catalan Christmas stew--sticks out, if anything in this overheated, overflowing bowl of mushy potage remains distinct in memory, it's Bardem. He's like the MGM lion with sad, Castillan eyes, a monument of a figure with a magnificently sculpted head and mane (Bardem's hair worn loose and long is like a mark of Biblical profundity--that's why the ridiculous 'do forced on him by the Coen brothers was so unforgivable, Oscar award or no Oscar award); he is like a supersized silent stone figure meant to commemorate some great tragedy (in Inarritu's eyes, three or four of them). Bardem as Uxbal somehow makes all this work; he sells the absurd plot with his heroic forbearance, his almost inhuman way of glaring at one unspeakably sad image after another and making his reaction somehow fresh and honest (even if for the film's last hour he's been racking up enough tragedies to fill a dozen socialist operas full to brimming).

Bardem does more than his share in selling this silliness--you almost want to bow to him in respect for what he's trying to do. You want to say “what a pile of shit!” but the scorn catches in the throat; the attempt, after all, is made with noble (if simpleminded) intentions, and the failure is still of Brobdingnagian scale, and impressive as hell.

The picture does remind one of other, more successful attempts: one remembers the Dardennes brothers' La Promesse (1996) which also dealt with illegal immigrants, but was as beautiful and persuasive in its austerity as this is confusing and ridiculous in its prodigality. It helped that the Dardennes filtered the story through the eyes of a child; when detail after damning detail finally clicks into place in the child's quietly perceptive mind, he (and through his eyes we the audience) gasp at the monstrousness of what's going on. The understated heroism of the child's final gesture seems earned, where the tragedy of Bardem's downfall here--and it does feel tragic despite, not because, of all the hoo-hah--seems forced and artificial. The Dardennes are masters of gracefully neorealist storytelling; Inarritu, it seems to me, is a master of garishly sensationalist poverty porn. All in all, I much prefer the Dardennes.

I haven't seen this film yet, but I agree with your general opinion regarding Inarritu's previous films. This review will certainly guide me, as I navigate through the movie:) You also made me curious about the Dardenne brothers-- I will definitely look for their movies.

Definitely check the Dardennes out. And as for social realism we have our own less pretentious masters--Brocka, O'Hara, Lav Diaz, Jeturian.