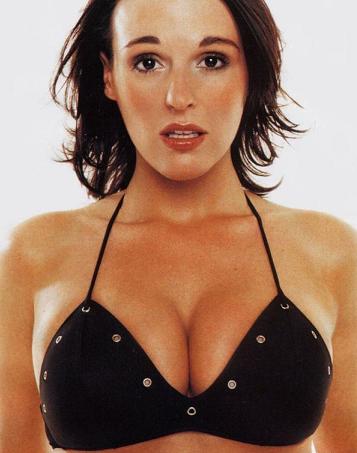 The Doctor's eponymous spouse (not dressed thusly in the episode, sad to say)

Was looking at Steven Moffat's Silence in the Library / Forest of the Dead again, from the fourth season of Doctor Who.

Was not a big fan of this, first time I saw it. Too busy, I thought; too much recycling of past Moffat devices (the zombielike masked figure repeating his eerie phrase over and over again in The Empty Child, for one). Plus, following Blink-- easily one of the most intricately written and frightening Dr. Who episodes ever written--anything less than a home-run masterpiece was bound to feel disappointing.

But the episodes grow on you, especially on repeat viewing, especially after what we know now about Dr. River Song--after her little soliloquy involving 'the worst day in the world' for her, as outlined in Season 6's Day of the Moon.

It's all here, in our first meeting with Dr. Song. She meets him, she talks to him; when she realizes that he doesn't know her, she's devastated. Actress Alex Kingston doesn't overplay this--it's there if you happen to know what you're looking for--but the absolute agony on her face, knowing she's meeting the Doctor (David Tennant) for the very last time and he doesn't know it, is harrowing to watch. Possibly Moffat has invented a new sub-genre in drama--the character whose subtext deepens and develops with repeat viewing (perhaps not, but--he did make me pause).

While we're at it, kudos as well for The Beast Below, from the fifth season. After the exuberance of The Eleventh Hour, this episode came off when I first viewed it as another sharp disappointment (I remember feeling that maybe Moffat shouldn't have taken the role of showrunner after all, that he's finally assumed a position that's simply too much for him).

On re-viewing however--yes, there are flaws; yes there's too much invention (flying cities, interstellar whales, mass migrations, police states, long-lived royalty, elections with accompanying memory wipes) crammed into a little over forty minutes; yes the poor Smilers are given short shrift--from being potentially as frightening as the Weeping Angels they're relegated to being low-ranking enforcers of British law, quickly dropped and forgotten. Yes the ending may be a tad too life-affirming, the so-called police state ultimately too benign for good drama.

But the episode's not about scaring your pants off (though for a moment there it may have been touch and go); it's more about Amy (Karen Gillan) learning a crucial bit of information regarding her traveling companion, the 'mad man with a box' (Matt Smith, taking over from Tennant). It's about acquiring empathy for all kinds of creatures, great and small, especially long-lived ones unable to articulate their loneliness. It's also about two strangers thrown together who in  crisis learn how to work with each, trust each other. As an episode about character, about one more piece to the puzzle that is the Doctor's personality--in my book a crucial piece, that gives us a hint as to what drives him onwards--I think it's an excellent and poignant example of the genre.

Moffat despite his inconsistent record is possibly one of the better writers on Who--but just this past few weeks we've seen evidence of a writer as good if not better: comics writer Neil Gaiman, who penned The Doctor's Wife.

Personally I like unconventional storytelling, where conflict isn't apparent and heroes and villains almost indistinguishable--but I can see where an exclusive diet of this can seem wearying, and Gaiman's fiction at its most careless can devolve into a series of static tableaus and stillborn images (conflict, after all, being the motor that drives narrative).

There's definitely a motor in The Doctor's Wife--a malevolently intelligent planetoid out to consume the Doctor's TARDIS--but as with all things Gaiman you know (you just do, that's all) where his priorities lie: in the delineation of character, the working-out of a character's personality and psyche, and how this interacts with other characters.

Gaiman is a longtime fan of the show, you see it in the way he sets most of the action in a junkyard, arguably alluding to the opening scene of the very first episode ("An Unearthly Child"), or evoking details from various Who episodes ("Edge of Destruction," "Castrovalva," "Logopolis," "The Five Doctors"), but perhaps his one stroke of genius is to take this imposing mountain of continuity and lore and with the snap of his fingers send them spinning into orbit around a single central idea: that the Doctor's TARDIS has suddenly been incarnated as a beautiful if eccentrically dressed and coiffed woman (Suranne Jones).

Beyond Rose, beyond River Song, beyond Romana and all the women and men and aliens and such the Doctor has known and rescued and cared for throughout the star systems and centuries, this is the central relationship of the show. If anything, the basic Who formula boils down to: 1) Doctor arrives at a strange time or planet in his TARDIS; 2) Doctor is separated from his TARDIS; 3) Doctor must resolve issue before reuniting with his TARDIS or die. Or worse.

Dramatically speaking, the need to separate the two is obvious--not much suspense possible if you can simply pop back and make things right. But corollary to this we often see the Doctor running after his beloved police box in episode after episode, their eventual reunion almost always an occasion for celebration. It's inevitable--if he doesn't get to her by episode's end, there won't be another episode (either that or it's a cliffhanger).

Gaiman's recasts this narratively and dramatically necessary relationship in fleshy terms--not between man and machine, but between man and woman. Given a mouth, the TARDIS takes a nip at the Doctor's ear: "Biting is excellent! It's like kissing, only there's a winner." Given a mouth, she spouts other equally outrageous statements--among others, the idea that she stole the Doctor, not the other way around ("What makes you think I would ever give you back?" she asks); also the idea that she takes the Doctor not where he wants to go, but "where you need to go."

Oh yeah. The seemingly opposing qualities of random eccentricity and dramatic necessity in the long-running television series are squared away into narrative coherence with that single statement. I've seen fantasy writers work with as much imagination; not sure I've ever seen one work with as much audacious elegance.

Readers familiar with Gaiman's work may spot reworked material. Idris (the enfleshed TARDIS' nickname) with her eccentric line deliveries, her obsession with the precise definition of a word, her ability to conceive of time not as a series of moments the way we mere mortals do but all at once--all that seems to have been inspired by the figure of Delight, one of the Endless in the Sandman comic books. The Doctor himself at certain moments assumes a distinctly Morpheus-like pose (When he hangs sadly from a sling, say, fiddling with the TARDIS' innards).

I love it that the episode's publicity makes such a big deal about showing us hitherto unknown parts of the TARDIS--which turn out to be yet more corridors (the series is notorious for the number of passages its protagonists have sprinted through). I love it that with a series of hallways and a pair of fleet-footed humans, Gaiman still manages to inject a note of unmitigated horror. I love it that all that footwork leads them to the Ninth Doctor's control room--quietly kept stored away ("for neatness," Idris explains).

I especially love the moment when the Doctor introduces Idris to Amy, and explains what she is. "Did you wish really hard?" Amy asks sarcastically. Heck, I wasn't even really looking for anything specific--just a sort of generalized hope for a good season, with maybe a handful of outstanding episodes--but here it is.