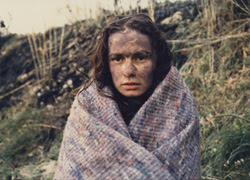 Sandrine Bonnaire in Agnes Varda's harrowing Vagabond
C'est la vie
The 2011 French Film Festival will run from June 9 to 19 at the Shangri-La Plaza, June 23 to 25 : at the Ayala Center Cebu, June 28 to July 2 at the UP Film Institute. Free admission, except for the Philippine premiere of Terence Malick's Tree of Life (whataminit, is that French?) which is by invitation only.
A little frustrating trying to find a single website with all the schedules, and not have to go through an extended Google hunt (makes you think it's some kind of state secret). But some of the films are really, really worth seeing...
...like Claude Chabrol's La Ceremonie (The Ceremony, 1995). Adapted from Ruth Rendell's novel A Judgement in Stone, it's a horrifying comedy (or a comic horror story) about two women--one, Sophie, is a housemaid; the other, Jeanne, is a post office worker--who set out to undermine an upper class French family.
It's told with a chilly detachment; one thinks of Hitchcock, Kubrick--yeah, those guys. But Chabrol is a flavor all his own; he wields a scalpel to upper class French society the way a serial killer in training might flay open a live bunny rabbit--slowly, leisurely, with absolute relish. You watch a pair of potential sociopaths conspire together, through the lens of a filmmaker who seems able to assume the point of view of sociopaths with all too apparent ease (Is he or isn't he? Chabrol never really lets on).
Sandrine Bonnaire as Sophie (the films is part of a festival retrospective on the actress) is all nervous tension and repressed resentment; Isabelle Huppert is pure amoral, volatile energy--they make a wonderfully odd couple, capable, you feel, of anything (that's what's so funny and scary about them). The ending is, needless to say, horrific and ironic in equal measure, but perhaps the single most interesting image in the film is the final shot--one has the sense of God's hand finally moving, of belated justice on the brink of being served; knowing Chabrol, though, one doesn't quite know if that really is His hand poised to strike, or blind chance playing a final practical joke.
Agnes Varda's Sans Toit ni Loi (Vagabond, 1985) is, if anything a possibly even more harrowing film. Bonnaire (who plays Mona, the eponymous wanderer) was all but eighteen when she did this, but her face onscreen feels ancient--as if she'd spent centuries wandering hungrily through the desolate French countryside. She meets people, and they form opinions about her, usually not very flattering (they talk about the grime; they also mention the smell). More often than not, their opinions say more about them than about Mona.
Varda's film can seem difficult, inert, much like the central character; at the same time it seems honest, without affectation. Easy to dismiss it as an unenlightening exercise in nihilistic despair, but--again like the title character--it stubbornly sits there, refusing to conform or go away, an uncomfortable reminder not just of the fragile tissue that separates a reasonably good day from unstoppable disaster, but of the utter unknowability of a fellow human being.
I may whine and moan about petty details, but the festival does have its heart in the right place, and one of its more admirable efforts is in promoting some of our better Filipino filmmakers--in this case, Auraeus Solito, who recently attended the Director's Fortnight at Cannes with his film Busong (Palawan Fate, 2011).
That film is not available, alas, but Solito's first feature Ang Pagdadalaga ni Maximo Oliveros (The Blossoming of Maximo Oliveros, 2005) is, and a good thing too--this is possibly his most accessible work to date. Where Chabrol is distant and Varda inscrutable, Solito is tender, warm, totally open-hearted--he doesn't hide anything from you, nor does he wish to.
It's the coming of age of a gay young man (or as the community sometimes puts it, a "queer boi") and he does not fit the stereotype of the unhappy martyr, persecuted by family and friends; if anything, his family gladly accepts him, a mother substitute nursing his family of older brothers and a father, a startling affirmation of gay life that does not follow preordained patterns or preconceived notions. Yes, there is a drama here, and yes Maximo will go through transformation and not a little suffering, but not quite in the way casual viewers might expect.
Along with this charming little feature is his documentarylike Basal Banar (2002) which is a little difficult to describe--as much chant and meditation on Palawan spirituality as it is a beyond gorgeous celebration of Palawan's rainforests, Basal Banar is pretty much a mystery too, but not mysterious--one feels Solito's love and total absorption for the subject, his need for spiritual transcendence.
First published in Businessworld, 6.9.11
at 6:52 PM