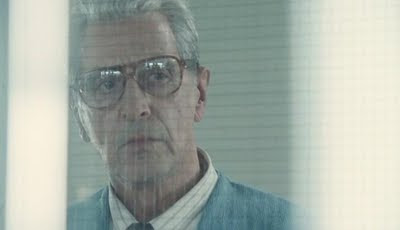 Al Pacino as the Angel of Death
Angel of death
No doubt Barry Levinson's HBO original feature You Don't Know Jack is liable to divide audiences clearly along political and cultural lines, the very name of Jack Kevorkian did the same; so did--and still does--the issue of assisted suicide.
Too bad; whether you're pro or con on the issue, the film's an entertaining striptease that attempts to ask the question "Who is Jack Kevorkian?" The question's approached obliquely, from an angle; approached the way Kevorkian seems to approach any major decision in his life--with plenty of seemingly random shuffling and mumbling and offhand observations that he somehow pulls together in a coherent whole. Whether you're pro or con on the issue, you have to admit this is an excellent sales job on the man who in many ways incarnated that issue.
It helps that Levinson shoots matter-of-fact footage that seems to capture Kevorkian either going about the business of his own life, or helping others end theirs, then assembles that footage in a manner and rhythm that is both lively and distinct. One thinks of TV (Levinson produced the Homicide series, and directed a few episodes himself) and how fleet-footed and casual it can be (shooting for TV can take as little as a few weeks, compared to a few months for a film); one also thinks of the odd rhythms of jazz, and how the film seems to be cut to a syncopated beat (apparently Kevorkian loves not just Bach, but jazz music, and Levinson seems to be channeling that). If anything, it's a pleasure to see how much Levinson has grown since the early days when he made small character-driven pictures (Diner (1982)), to the big-budgeted, rather boring Hollywood productions (The Natural (1984), Rain Man (1988), Disclosure (1994)) to his later, leaner TV work. Wouldn't call him a distinctive stylist, but he's wonderful with actors, and he does have this recognizable street sensibility that keeps this film grounded, gritty, real.
It helps to have the cast of characters that he has--John Goodman as a steady Neal Nicol, Kevorkian's medical supply man; Brenda Vaccaro as the occasionally fiery Margo Janus, Kevorkian's sister and staunch supporter; Susan Sarandon as Janet Good, founder of the Hemlock Society (a right-to-die group), assistant, and later patient (she tells Kevorkian she has pancreatic cancer and wants to choose her moment of passing). It's a quietly talented group particularly Goodman, who deftly fills out his character with texture and detail, without calling undue attention to himself (he plays out his moments, leaves it at that).
Central to the whole project is Pacino, and while it's difficult not to see the visage of Michael Corleone grinning malevolently at us from the promotional poster (the real Kevorkian was more like a somewhat frail grandfather) on film he carries the role with casual ease--the rather distinctive accent (one thinks of the Minneapolis Midwestern lilt in the Coen Brothers' Fargo (1996)) that is heard most clearly when he's stressed; the fuddy-duddy mannerisms that charm casual observers until the man gets his ire up; the flash of steely resolve when he's backed into a corner and refuses to budge. His Kevorkian isn't monumental, career-defining acting but it's meticulous work, and it succeeds in persuading us that we're witness to a human being being carefully unveiled (hence, presumably, the title).
Levinson doesn't try to be evenhanded; you can tell from the get-go that the film is sympathetic to Kevorkian's cause. He doesn't try to whitewash Kevorkian's fall--with his matter-of-fact manner and unblinking camera lens he records Kevorkian insistence on a showdown with anti-suicide groups, forcing a showdown in court, and how the man gradually and thoroughly shoots himself in the foot while trying to defend himself. The judge looks on with painful dismay; even she has to shake her head at the enormity of Kevorkian's blunders.
As for the very issue of assisted suicide...Kevorkian in an intimate moment tells Janet of how his mother described her bone cancer: "imagine the worse toothache in the world, then imagine it coming from every bone in your body." I've had my share of bad toothaches, and I'd like to say I'm willing to stick it out in the face of news that I have bone cancer--but what I'd like to say and what I'm actually going to say when the moment comes and keeps coming for months are very possibly two different things. I'm Catholic; I believe in the sanctity of life, I believe that suicide is the one unforgivable sin--but it's one thing to declare your belief, another to back it up with actual experience; one thing to believe in a principle, another to try actually force my views on others, particularly as a law. I like to think I can answer for myself when it comes to my own demise; everyone else, I'd say that's their decision to make.
Published in Businessworld, 5.19.11
at 4:17 AM

Great Review! Al Pacino was excellent in this. He deserved his Emmy and Golden Globe.

There's some as say the best acting and writing nowadays is on cable.

I'd say this: if the Oscars wanted any credibility, they'd have given him Best Actor, maybe start recognizing TV and cable work (I know I know, bite the hand). Or: the Emmies should have a resurgence in prestige, at least in the two categories, and the Oscars should only focus on Film Direction and Cinematography. Maybe a handful of other technical awards.

In a perfect world, of course.