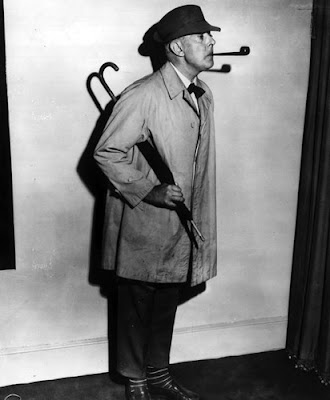 Tati playing his alter ego, M. Hulot
Magic to do
Sylvain Chomet's The Illusionist (2010) comes with a fair amount of baggage. It's based on an unproduced script by Jacques Tati some time between 1956 to 1959, reportedly his intended follow-up to the successful Mon Oncle (1958). Tati's name alone sets up expectations: of comedy routines done with visual panache and minimal dialogue, of a distinct and inimitable tone that balances delicately between precision and anarchy, melancholy and delight.

Then there's the more complex, less amusing issue of just who the young girl in the film is meant to represent--Sophie Tatischeff, Tati's legitimate daughter, using the filmmaker's real surname, or Helga Marie-Jeanne Schiel, the daughter he refused to recognize and subsequently abandoned some time in the Second World War? Tati's grandson Richard McDonald claims that the script was written for the latter as an expression of his feelings of guilt over her, and that Chomet's adaptation is an attempt to whitewash this aspect of the script.
So--baggage. Watching the film it's easy to read this as a late tribute to the great filmmaker, who at his very best observed and parodied our love-hate relationship with the modern technological world; it's also possible to read it as a tribute to old-fashioned artistry of all kinds--to Tati, to the music halls from which he came from, to largely handpainted feature animation (which has grown increasingly more difficult and expensive and rare, especially with the flood of mostly cheap-looking digital animation in today's multiplexes). One might also see the outlines of a gallant gentleman's shy courting of a pretty young woman (a la Chaplin in Limelight (1952)), or--faintly, faintly--the outlines of a guilt-ridden father trying to reconcile with his estranged daughter. One wonders: does the extra weight give the film heft, or drag it down?
A bit of both, I think. I liked Chomet's previous feature, The Triplets of Belleville (2003), but he's no Tati; he doesn't have the precision, or craziness, or mastery of onscreen space that Tati reveals to us in his greatest comedies (Mon Oncle, Play Time (1967)). He does throw in a rather alarmingly feral rabbit with a psychotic tendency to nip at outstretched fingers, the single funniest running gag in the picture (I imagine Tati would never have allowed (nor would he be capable of allowing) a furry mammal to upstage him). Given a script that Chomet tells us Tati didn't feel was appropriate for his persona, Chomet doesn't set it aside but goes ahead and produces it--and I think Tati was right. This is a tad too cloying, too self-conscious of its own frailty, its noble irrelevance in the scheme of things (in this it suffers a weakness similar to Chaplin's aforementioned film, which is more about his tragic decline and doom than about anything or anyone else).
Tati was rarely sentimental; he introduced the merest hint of bittersweet, sprinkled lightly over his alter-ego Monsieur Hulot, then goes ahead with the story. Full-blown tragedy may garner all the awards and recognition, but in my book comedy and especially Tati's comedy is more heroic--it acknowledges suffering same as tragedy does, but presents it solely for our pleasure, denying the pain any self-indulgence. Hulot's pratfalls are at some level sad, but it's up to you to realize this; Tati the filmmaker will never openly admit it to us.
But this is a Chomet film not a Tati film, and the director of record must if he is worth anything make the picture his own, even if the script were from a master like Tati. If he casts the protagonist not as Hulot but as some amalgam of Hulot and the man behind Hulot that's his prerogative; if he swirls beyond-gorgeous landscapes behind Hulot, throws wet-from-rain, cobblestoned streets under the man's feet, surrounds him with a magic-kingdom Edinburgh splattered in glorious watercolor style with the colors of the rainbow run riot that's his right as well, absolutely, even if he does so at his peril. The overwhelming visual style gives off a faint whiff of insecurity, of someone trying to compensate for a serious flaw by lifting the entire work to a higher (or at least busier) visual plane.
To which I say: that's good--probably the best thing about the film. Chomet's ravishing color palette and evocation of a specific place and time allows him the courage to set up his own (considerably stickier) tone; it allows him to set up an ending that acknowledges not just Hulot's alienation but Tati's ambivalent feelings as a father.
No, it's not a Tati film, and to Chomet's credit I don't think he ever meant it to be--it must stand on its own, not even attempt to scale such heights. But it is a wonderful anachronism of a film, a recognizably distinctive work from Chomet, and in my book one of the best animated films of the past few years, in a period that has already seen the release of fine works like Adam Eliot's Mary and Max (2009) and Tomm Moore and Nora Toomey's Secret of Kells (2009). Worth a look--on DVD if you have to, on the big screen if you can, where--word of warning, here--it might put your eyes out from sheer visual beauty.
First published in Businessworld, 5.26.11
at 12:18 AM