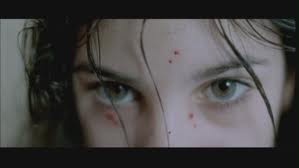 (Lina Leandersson as Eli--accept no substitutes)


Matt Reeves' Let Me In (2010), his remake of Tomas Alfredson's remarkable Lat den ratte komma in (Let the Right One In, 2008) doesn't push its gore effects in your face; keeps most of the digital effects in the realm of the plausible (or at least halfway acceptable); finds a voice distinct from the original while still being recognizably from that original--not necessarily a good thing, but at least intentions are honorable. In other words, director Reeves (for whom this was a sophomore effort, after the fairly interesting monster-mockumentary (monstermentary?) movie Cloverfield (2008)) is obviously not out to cash in on a much-admired cult hit--he felt he had something to bring to the party, so he did it.

Reeves' picture revolves around Owen (Kodi Smit-Mcphee), a young boy living in a small New Mexico town who meets Abby (Chloe Moretz), his next-door neighbor. Abby's a vampire, something Owen doesn't realize at first; he's too preoccupied by the gang of older boys who bully him in school. "You have to hit back," Abby advises him; "I can't, there's three of them," Owen replies. "Then you have to hit back even harder."


Way to go, Abby, setting him up for eventual success. The heart of Reeves' picture can be found in this portrait of American middle-school life: the impersonal educational-institution setting; the predatory youths; the oft unheeding adults. Alfredson's picture does include bullies who (along with his protagonist and most of his cast) seemed to have been chosen more for physical variety and the memorably odd visual contrast than for mere prettiness, but for Reeves school is the source of much of the picture's horror and pathos, the bullies here more vividly if conventionally drawn (cast for larger size and intimidating presence), Owen more clearly a target of their cruelty.


Reeves' treatment of Owen and Abby is more openly emotional, more unabashedly romantic. When Owen asks Abby "Do you want to go steady?" it's an "aw shucks!" moment--you badly want to pinch their cheeks and pet their heads. Reeves gets deep under Owens' skin: the first time he meets Abby, the thrill of her touch, the dawning awareness that she is lying next to him wearing nothing, the despair when she appears to be leaving him--all this Reeves plays at a distinctly higher pitch, with Owen's face trembling in response to each situation like a tautly drawn drumskin (you can see the tension, the fragility). You even see Reeve's intentions in his lighting scheme, which makes greater use of sodium lamps that give off a warm amber glow (Alfredson's lighting, in comparison, seems to emanate more from the snow than from anything else--talk about winter light, it's as if the very camera lenses were made out of crystallized ice).


Not bad at all--compared with the Twilight movies, this is vampirism with visual intelligence and an authentic emotional core. But where Reeve's picture is basically a sad story about a vampire girl who seeks a friend, Alfredson's film is a far more understated, far more chilling creature. Oskar (Kare Hedebrant) isn't the frightened victim that Owen is; in fact, he's a little creepy--when whipped in the cheek he gives off a soft exhalation, as if sexually aroused; when taking out his pocket knife and threatening a tree, you get the sense that he's not just acting out of frustration and a desire for vengeance, but out of lust, a desire to usurp the bullies' physical power, and use--or abuse--it accordingly. Watching him you sense that, given a chance, he may prove to be even more of a sadist than his tormentors.


Reeves loses the neighbors found in Alfredson's film, and as a result we lose sense of the tiny apartment community that the vampire Eli (Lina Leandersson) quietly infiltrates, and victimizes. More, we lose the crucial figure of Virginia, one of Eli's victims, who is given a choice: death or living death. Her decision stands in stark contrast to Eli's and gives the film a touch more moral complexity, as well as one of the film's most starkly beautiful, most horrifying moments (a bonfire that literally lights up the center of the screen).


Actually, Reeves loses many of Alfredson's beautifully horrifying moments (not an oxymoron in my book--in fact I believe the very best in horror contains not a little beauty). The original's first attack, done from high up and in a single shot, underlines our helplessness as Eli wraps herself around her victim; Reeves, while taking his time and using a commendable silence for his aural background, prefers to come in closer (apparently in Hollywood horror filmmaking consists mainly of pushing the gore effects in your face--or, in Reeves' case, pushing it from a point about five feet away, compared to Alfredson's forty). The final swimming pool scene, so oddly serene and weightless in Alfredson's film (I think key to its unsettling power is that serenity), is dutifully replicated in Reeves, with the usually Hollywood additions of just a touch more noise, just a touch more gore, just a touch more effects.

But that's just details--incidental consequences, basically, adorning Alfredson's thesis: that Eli is not just a sad-eyed little girl with supernatural powers but also a seductive manipulator, scheming to sink her hooks into the tender flesh of a budding serial killer. And yet she is, at the same time, still that sad-eyed little girl yearning to befriend Oskar--the ambiguity, the possibility that they are one or the other or even both--is what gives the film its unsettled, and unsettling, subtext. By all means, see Reeves' film--it's a decent adaptation, made with care and skill and talent; but be aware that Alfredson's is the superior version, and you're best off seeing that first.

the CGI effects of Let me in were awful, but other than that, the movie's good. Stephen King chose LMI as his top movie of 2010.

OT: have you seen kinatay yet? meron na sa dvd. not bad at all. great cinematography, editing and sound. may "apocalypse now" vibe ang pelikula.

I thought they were okay. Probably better funded and produced the Swedish original.

Of King's list, I'd agree with The Social Network and that's about it (though Kick Ass was fun). I can't say I find him very credible--best horror of the decade has to include something from the Japanese, the Koreans and the Italians. And Stuart Gordon, among others.