The Girl who Played with Fire (Daniel Alfredson, 2009) 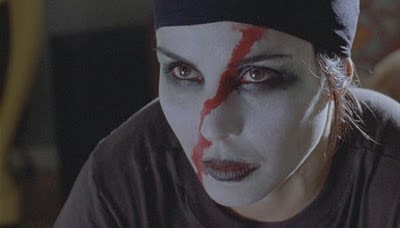 Stieg Larsson's Millenium Trilogy--three novels, featuring the memorable leather-clad, bike-riding, computer-hacking Lisbeth Salander--are a worldwide phenomenon, having sold forty million copies to date; the film adaptation of the first book The Girl with the Dragon Tattoo, directed by Niels Arden Oplev, was made for a mere thirteen million dollars, and has to date earned over a hundred million worldwide (the sequel was made for four million, and grossed sixty-five million worldwide).

One can see the appeal. Lisbeth (Noomi Rapace) is the angry young punk who uses her brains and on occasion her taser (she also swings a mean golf club and ax when necessary) on the various Swedish authority figures that have abused her in the past; magazine journalist Mikael Blomkvist (Michael Nyqvist) is her front man (he does the interviews and makes the phone calls) and Boy Friday, and at least in Dragon Tattoo is the functioning Dude in Distress depending on Lisbeth to swoop in at the last minute and save the day.

I like a lot of it; I like it that Larsson is an outspoken feminist, having had a personal traumatic experience in his youth (at fourteen he'd been witnessed to a gang rape he failed to stop, of a girl named Lisbeth), and in his heroine he's created a kind of avenging angle complete with nose ring, laptop, and in one fist a few hundred thousand volts of crackling electric arc. Niels Arden Oplev, who previously directed dramas, seems mostly interested in serving the emotional intensity of the material; he tells the story mainly through the coolly intellectual Blomkvist's eyes, and for the picture's tone takes his cue from the journalist's professionally objective manner (Blomkvist doesn't even seem all that upset when he's jailed for three months--from his expression you would have thought he had won a Mediterranean cruise vacation). All the better then, when that gaze falls on Lisbeth, as lithe and vivid and oversized a presence as the dragon tattooed to her back. Rapace is not conventionally pretty, but she has an intense reptilian look (glare is more like it) that seems to challenge anyone and everyone it meets; more, as she plays Lisbeth (and as Oplev directs her) she has a physical quickwittedness that makes one sit up in one's theater seat. "This girl will go places," you think as you feel your eyebrows climb up your forehead, "if she lives long enough."

She could be better served by the narrative. My biggest problem with Dragon Tattoo is the brokeback structure, with perhaps the most momentous sequence in the picture coming too early: Lisbeth has acquired a new probationary guardian named Bjurman (Paul Andersson), who turns out to be a sadist with designs on the wary Lisbeth. Their scenes together--Bjurman with Lisbeth and Lisbeth's vigorous reply--are clearly the film's centerpiece, and possibly the reason why many of the people agreed to do this project. I say: well and good, and hooray for the strong and unglamorous depiction of sexual assault, but in storytelling terms it pulls the reader's attention away from the thrust of the main narrative when a minor character is this despicable. When Lisbeth and Blomkvist finally face the real bad guy (an ex-Nazi, as it turns out, with a longstanding career in sexual sadism), you feel that the picture has already fired most of its dramatic ammo; this confrontation can only come across as something of an anticlimax.

The Girl Who Played With Fire, this time directed by Daniel Alfredson (he was second unit director for Dragon Tattoo, though he had also directed a few features previously), corrects this by coming up with a singular villain, one more worthy of Lisbeth. The mysterious Zala--a former GRU operative who fled to Sweden from Russia after killing a man--has engineered the death of two reporters investigating sex trafficking in the country, the project being spearheaded by Blomkvist's Millennium Magazine (and which Lisbeth, watching quietly from her all-seeing laptop, secretly approves of and supports). Right from the start Blomkvist and Lisbeth are collaborating (if only indirectly, through the internet); right from the start the pair are faced with an opponent that isn't confined to a soundproofed basement, waiting for them to root him out, but an active intelligence with a network of information and resources. Acting as Zala's manservant and foot soldier is a giant named Niedermann (Mikael Spreitz) who has boxer's training, blonde hair, and a touch of congenital analgesia (he's basically impervious to pain). To complicate matters for Lisbeth, included among the corpses is the body of her old friend Bjurman, her lawyer and probationary guardian; she has just become suspect number one in his murder.

Alfredson isn't necessarily a superior filmmaker compared to Oplev. The action sequences aren't particularly memorable (neither are Oplev's, actually) but they do avoid the cliché of handheld shaky-cams and chop-suey editing; especially good is one fight sequence, where the giant squares off with a championship boxer named Paolo (Paolo Roberto). Alfredson gives us a good sense of their differing fighting styles, how the giant is slower yet still dangerous, and how the boxer is faster, more skilled, yet hugely outmatched.

If Larsson meant to condemn man's cruelty to women, I'd say he does a better if less visceral job in Played with Fire--Zala is a far more formidable foe, and when confronted with Lisbeth their undisguised contempt for each other is just about peerless. If we're talking of institutional authorities, of abusive patriarchs, of men who symbolize ruthless power and unflinching abuse of women--a former Nazi and serial killer (as was found in Dragon Tattoo) may seem ugly and grotesque, but he's basically an isolated case, with few widespread consequences. A professional still involved and functioning and in some ways actually serving society--now that's a whole other proposition. The symbolic baggage sitting on Zala's head has a heft and weight not dissimilar to that of a figure in Greek Tragedy. He is an archetype looming over our heroine, watching her every move with baleful malevolence.

I must respectfully disagree. The Girl with Dragon Tattoo was far more poignant portrayal of abused women as evidenced by rapes and beatings of the heroine, not to mention the basement murders. It also seemed like the director in Girl who Played with Fire gave Lisbeth a softer, gentler persona that lacked the gritty hard-edge feel of the first film. Tattoo had an unpredictable quality that made it all the more compelling whereas Fire seemed more polished, over-produced and formulaic (yawn). Lisbeth character in first film had a certain controlled rage and savage ferocity that was lacking in Girl who Played with Fire. If anything, she seemed more a victim than the victor in the second film. Often the sequel does not rise to an equal level with the original....

Not saying it's not poignant, but where it sits, in the middle of the film and involving a minor character (in the overall plot of the first film, not of the overall trilogy), it's a powerful moment with nowhere to go. Looking at it primarily from a storytelling and not feminist viewpoint.

As for sequels--there are exceptions, of course. I liked Fire better, but not strong enough to insist that you are wrong. They're okay films.