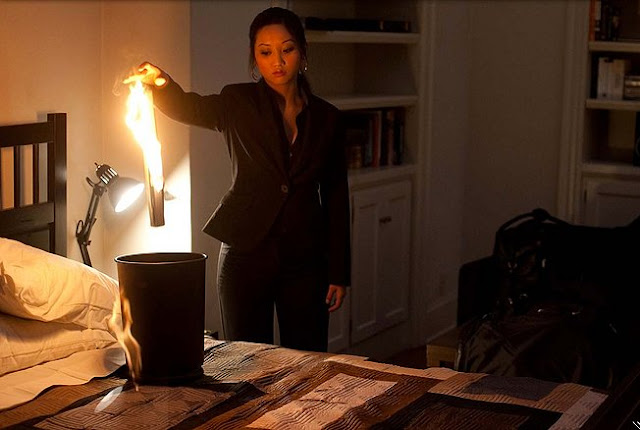 David Fincher's The Social Network (2010) is based on a clever script by Aaron Sorkin which is based, in turn, on what is said to be a factually unreliable book by Ben Mezrich (The Accidental Billionaires) which is based (loosely or accurately, depending on who you talk to) on the life of the world's youngest billionaire, Facebook founder Mark Zuckerberg.

On the question of Fincher's film's accuracy: don't much care. I'd call it the imaginative retelling of a man's life and leave it at that (in one interview Sorkin calls it 'nonfiction,' Fincher calls it 'fiction'). The tale has been considerably polished, and there's nothing basically wrong with that--Shakespeare did it to Richard III (hunchbacked sociopath, anyone?). The real question would be: are the results compelling enough to justify the embellishment?


I'd say yes. Fincher's film begins with a crackerjack scene: Mark (Jesse Eisenberg) is dumped by his girlfriend Erica Albright (Rooney Mara); drunk and bitter, he goes home to his computer and starts hacking various women's dormitory online databases for their pictures, cobbling together a site called "Facemash" where you can compare and choose who is the prettier coed. Jump to a scene of Mark attending a deposition reading for a lawsuit being filed against him by Eduardo Severin (Andrew Garfield), his former partner, for control of Facebook. Then jump to Mark attending yet another deposition reading, this time for a lawsuit being filed by the Winklevoss twins, who are accusing him of stealing their idea for Facebook.


It's a tad confusing, if fast-paced; what makes this sequence interesting is how Fincher (working on Sorkin's script) manages to dribble precise amounts of information--a casual mention here, a quick aside there, a crucial exchange to follow--so that you gradually realize the shape of the film's narrative. The film takes disparate stories, characters, points of view, and in linking them creates an overarching, kaleidoscopic whole; a network--a social network, in effect.


Not an easy concept to dramatize--there are no swooping shots that follow cable modems from user to user, nothing cheesy like what Fincher used to pull (see Panic Room); here he relies on editing, match cuts, timed reactions to various events to give us a sense of many things happening simultaneously (or, if not simultaneously, with a kind of imposed symbolic synchronicity). When a lawyer brings up an event for example the picture turns back to the date mentioned and dramatizes the event in detail; sometimes the film first dramatizes the event, then fast-forwards to the deposition scene to enlarge upon the event's implications and consequences. Difficult to keep coherent much less entertaining, but Fincher manages to keep Sorkin's many balls arcing through the air in a precise juggle.


But the juggling is the least impressive of Fincher's effects; pulling the twists out of the narrative and cutting out all the scenes of near-naked girls snorting coke, the film is really about Zuckerberg's insurmountable loneliness. "You're...thinking that girls don't like you because you're a nerd," Erica explains to him; not so. "It'll be because you're an asshole." Zuckerberg joins Fincher's gallery of autistically focused loners who make sense of their lives through their various unholy quests, from John Doe in Se7en to the many investigators who tried and failed to find the killer in Zodiac. Fincher is the poet of lonely obsessions, and he turns Sorkin's script into a bleakly lyrical ode to the joys and agonies of a man who again and again fails to connect.


Perhaps Fincher and Sorkin's most interesting achievement is to create so much excitement--the picture is two hours long with nary an explicitly nude scene or gasoline explosion--out of a group of people spouting technogeek. Facebook when you come to think about it is really much ado about very little; when Betty White found herself hosting Saturday Night Live (thanks, ironically, to her many fans on the website) she confessed to having visited Facebook and declaring "I must say it sounds like a huge waste of time."


Hooray for Betty! Yet it's the biggest social phenomenon since, oh, the cellphone. For all its insubstantiality ("friend" me; "comment" on my "status;" join me in playing "Farmville"), Facebook is huge--its half a billion members' near-addicted commitment to the website give it enduring power, and its creator unimaginable wealth. A film about a man who grew rich on a program designed to answer the question "are you having sex or aren't you?" shouldn't be so complex, or so evocative, or so representative of its age (as some critics claim it is), yet somehow this film is; that's it's real accomplishment. Then again, perhaps Facebook represents this age so well because it (the age, I mean) doesn't mean much of anything either; a precise match. Whichever is the case--Facebook as deceptively substantial or the age it represents deceptively insubstantial--the film embodies this sensibility perfectly.

The Social Network is terrifically entertaining. It's like, it's still growing in me. I like how it works as a social satire, how Zuckerberg et. al is pitted against his creation. I particularly like the last scene.

I like it best as a personal work, a study in loneliness, and the difficulty in reaching out to someone. I don't think we really connect with facebook, at all--just kind of grope at each other in the aether.

It's really interesting, and funny in a way, that, at least for me, we never really loathe the version of Mark, as the way Fincher and Sorkin sees it, or as Eisenberg portrays him. We still root for him, in some secretly, vindictive way. Because if we hate him entirely, that means, we'll be hating ourselves.

Oh, yeah, there is a great deal of sympathy for Zuckerberg here, which is part of the reason why I don't understand the non-love Facebook has for the picture. Arguably that could be Fincher's consistent theme: the understanding of if not actual empathy with the story's lonely protagonist.

at first i go to this movie because my curious to find out how it all began, i haven't had views for a successful film. but for my surprise i found a very entertaining film. very recommended!