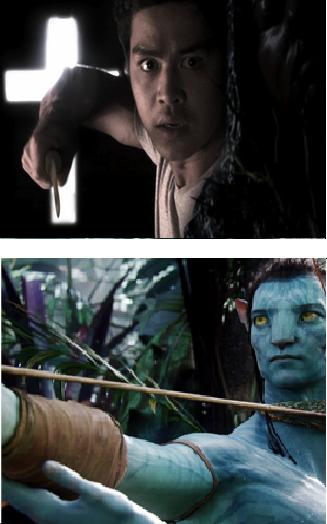 Altar vs. Avatar
At first blush the two pictures couldn't be more different--one is a gigantic Hollywood production with a quarter of a billion dollar budget and fifteen-year development period (two months of which were devoted to live-action photography); the second is a tiny independent production with a thirty thousand dollar budget (barely enough to cover the cost of laundering the former's dirty underwear), two months pre-production period and eight days to actually shoot the movie.

First published in the March 2010 issue of Rouge Magazine
at 4:13 PM

Read this off the stands, good job. Rogue is the title of their mag and yet they have the consummate mainstream enabler in Jose Javier Reyes front and center AND staring at his own reflection at that. And interviewing himself! For us true cinephiles, we can only weep in our green tea Starbucks fraps that the true Rogue "direk Joey" is no longer with us. The one and only "O.G." Original Gosiengfiao!

Well, Joey Reyes does do some good work--I especially like his middle-class melodramas--but I do miss Joey G. I think he was better--crazier, funnier--than Almodovar.

Is it enough to say that I went to see ALTAR but I didn't bother to go see AVATAR?

I say amen to that, brother!

why is KINATAY still not yet released in RP theaters? why no dvds?

btw noel, if you start twittering, i'll follow you.

same here, didn't bother to watch Avatar. I haven't seen Altar though but I liked Ilarde's Babaeng Putik and Sa Ilalim ng Cogon. His last film though was a disappointment.

But still love The Terminator.

john that's too newfangled for me. And if it's additional cost to do, I'm definitely not doing it. At least blogging is free.

Villa Estrella? It's not too bad, and I like quite a few of the setpieces. Don't think we can expect a home run every time.

The Terminator was Cameron when he was hungry. And its best ideas are from Philip K. Dick.

twittering is free. and it's very easy. Here's from bill simmons.

3. What’s the biggest story the media has missed this year?

The potential of Twitter. Old-school media doesn’t get Twitter at all. A lot of people still think it’s a fad and it’s totally not a fad. Cocaine was a fad. The Osbournes were a fad. Auto-asphyxiation was a fad…. well, unless you were David Carradine. If anything I think we are just scratching the surface of Twitter for better and worse: it started breaking stories last spring and over everything else, that’s why it won’t go away. Now reporters are posting scoops on Twitter before they send the finished stories into their employers. People are not seeing what is happening here. Facebook is a social network; Twitter is a media/marketing vehicle disguised as a social network.

PK Dick's the best, you think?

well, I have Dicks 4/5 novels waiting for me, still on Bladerunner,erm, i mean Do Androids Dream Of Electric Sleep..just finished Palmer Eldritch..Ubik, Scanner Darkly will be next..

Ubik starts out really slow, then turns into what may be the most vivid paranoid nightmare ever imagined. Scanner Darkly is a bleak, dark novel, worthwhile more for the characters (who are wonderful, unforgettable, sometimes hilarious) than for any outright science-fiction ideas, which are minimal here.