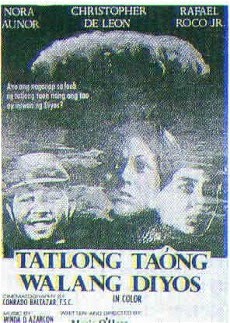 Just had to put this out: Mario O'Hara's 1976 masterpiece Tatlong Taong Walang Diyos (Three Years Without God) is now available on DVD. Word is it's watchable (whatever that means); no mention of English subtitles, or extras of any kind.

I'd be happier with just a print in good condition--if you ever have a chance to attend a screening (and not one of those 'projected video' horrors people are fond of having nowadays) then please go.

Otherwise, if this is the only way you get to see the film...well...

The film, incidentally, has been included in Jaime Christley's blog Unexamined Essentials, basically a list of must-see films that deserve to be, well, seen.

Also released on DVD by the same company is Lino Brocka's Bona (1980)--the selling point being these are two of actress Nora  Aunor's best-known roles. My article on the film can be found here.

He gave pleasure; he harmed no one; he was totally unpretentious. We don't appreciate them enough, the Stan Laurels of this world (his comedy was predicated on a sweet passivity, as opposed to Oliver Hardy's petulant aggression), but they give their all anyway.


Dr. Who: The Eleventh Hour

A lot of ink and tears have been spilled over the passing of David Tennant's Doctor in The End of Time to which I nodded "yes, that's very  moving; yes, Tennant's very good; yes, he plays his final scene well," but in my heart of hearts kept thinking: "Screw this, when do we get to see the next Steven Moffat?"

They could cast Rowan Atkinson as the Doctor, for all I cared (Dr. Bean?); it was for the Moffat script that I waited, for over a year, and I was not disappointed. No, it wasn't another nail-biter like Blink (which I showed to my students recently, instantly converting most of them to rabid Whovians) no it wasn't a heartbreaker like The Girl in the Fireplace, no it didn't have the substance, the gravitas of his The Empty Child / The Doctor Dances (his best work in the series, in my opine), but it did have that distinct Moffat voice--quick-witted, eccentric, occasionally unsettling, with just that faint but never absent undertone of melancholy, the grief of people whose grasp of time is never firm, ever uncertain.

At one point in the show (one of those behind-the-scenes TV spots) someone pointed out that Moffat's concept of science fiction is cracks in the wall, monsters under the bed, children in gas masks, weeping stone angels--in short, anything and everything you see around you, slightly skewed and not a little disturbing. It's everyday objects, in short, cast in a more malevolent light (for forty minutes of thrills, it's hard to top Blink--I've had hardened eighteen-year-old boys shriek like girls when the angels start reaching out and snarling).

Moffat has this gift for running--no, not running, more like skating--across a wide range of emotional tones, turning on a dime from horror to comedy to horror to tragedy. Like when the Doctor (Matt Smith) climbs out of an upended TARDIS and meets Amelia (Caitlin Blackwood): the young girl informs him of a scary crack in the wall; he confesses to a hankering for apples. After the Doctor has sampled (and spat out in disgust) almost everything in Amelia's fridge, he finally settles on fish sticks in custard (ech), during which consumption Amelia informs him that she lives with her aunt, who's out working.

"And she left you all alone?" the Doctor asks.

"'Course you're not, look at you. Box falls out of the sky, man falls out of a box, man eats fish custard. And look at you, just sitting there. So you know what I think?"

"Must be a hell of a scary crack in the wall."

That's a typical Moffat moment--conversation that swirls in eccentric whorls and loops, suddenly swooping down on the point he'd been eyeing all along. Glad to have you back, sir; a  pleasure to once again listen to someone who actually knows how to write sharp dialogue.

And Matt Smith (who plays the Doctor) to his credit keeps up with Moffat's dialogue, his angular face every bit as lumpy and eccentric as the orbital course of that dialogue, his body wire-alert and fast on its feet (you do a lot of running in Dr.Who, but Moffat seems to promise more than the usual amount of sprinting). Karen Gillan as Amy (Amelia as a young woman) is a fiery, fresh-faced foil to Smith, every bit his equal when it comes to banter, at times even physically intimidating the Time Lord. I can't say Smith right off is the better Doctor; can't help but think Moffat's dialogue goes a long way towards making him such a smart, appealing character (Come to think of it, Tennant--and Christopher Eccleston before him--never sounded wittier or more intelligent than when they were mouthing Moffat's dialogue).
.
There's also a strong sexual frankness to this Doctor (not surprising, not if you've followed Moffat's hit comedy series Coupling). After spending most of the episode rushing about in David Tennant's outfit he finally takes the time to pick out new clothing, and strips his old threads. An offended young man asks Amy "Are you not going to turn your back?" "Nope," Amy replies, smiling, obviously checking the Doctor out. Moffat seems to be out to test the boundaries of Who's wholesomeness, and I for one welcome that.

The episode's unstated theme is trust; this is the story of a young girl--representing us, of course--learning to have faith in the apparently undependable Doctor, a total unknown who has the effrontery to capture our hearts, then leave us for years--maybe forever--without even a proper farewell. Moffat takes the basic storyline of The Girl in the Fireplace and inflicts it on a far less accepting girl; the Doctor finds himself forced to measure up to her expectations.

Behind the comic banter and pratfalls and the rather ordinary villain (a keen disappointment, if it wasn't for the enigmatic and thankfully not overdone signs of more to come), there's the unspoken assumption of heartbreak. The Doctor has disappointed poor Amelia, time and time again; she's learned the harsh lesson most characters in Moffat scripts learn--that time is an insidious, unstable  ("timey-wimey, wibbly-wobbly") thing, that our slow-moving, strictly linear consciousness will often conflict with or collide with or (as most often happens) slowly, painfully crumble away under the interminably corrosive influence of time. Moffat more than any other Whovian writer makes me laugh, but under the comedy you sense trauma, you sense sadness, you sense bitterly shed tears.

Not happy with much else: the corny logo ("DW" in the shape of the police box); the frenetic tumbling TARDIS; the overdistorted theme song; the goofy-looking alien ships (mainly eyeballs set into spinning snowflakes), the brightly orange new interior of the TARDIS (I liked the Victorian 'Nautilus' look of yore, all iron girders and amber lighting; this one looked like the inside of a scooped-out Halloween pumpkin)--the overall look of the new series doesn't grab me. But Moffat's scripts do, and how.

I was surprised that you only written about this now, well, O'Hara's Tatlong Taong Walang Diyos is on DVD probably around new year along with Brocka's Bona, and just recently, VideoFlicks (the distributor) also released Gerry De Leon's Banaue on DVD, it's part of VideoFlick's tribute to Nora Aunor.

About the subtitles, no, it doesn't have any.

I've got a backlog a mile long; my regret is I didn't write it sooner. Not to mention I've got mix feelings about this release--no titles, the source material is 'watchable,' not excellent, so on and so forth....

may need to modify that post--I've got this article on Bona...

I've seen the trailer of the new Dr Who. He's got an interesting face, almost Frankenstein-like. Can't wait to get a hold of the DVD. Love Moffat too.

Tatlong Taon DVD transfer is not bad at all for its age. Biggest gripe is that there are no subtitles and no chapter stops.

You mean he bears more than a little passing resemblance to James Whale's concept for Dr. Frankenstein's creature (that or Boris Karloff).

I can't complain with this release. But, yeah, if only they could do what Star Records did to Oro Plata Mata, it would be great.

Wish it did get the Star Cinema treatment. Frankly, I prefer Tatlong Taong over Oro, Plata anytime. The latter had flashier camera moves (a la Bertolucci) but the former is more quietly intense, reveals an understanding of human nature of an altogether different order.

And I agree totally. (He's a hoot in the upcoming Mondomanila, incidentally)

Oh and your Doctor Who review now has me placing my DVDs on the top of the To Watch queue. I've got massive catching-up to do.

What, only one paragraph? But thanks...

It's the Age of Moffat, dodo; be warned--I don't think he's going for a second season, and this is probably as good as it gets. Also, always thought you were based in the 'Pinas. Are you in the US?

Nope. Manila-bound and melting in the abominable heat. :)

So when you say queue you mean just a list--not an actual DVD mailing service.

Just a stack of DVDs beside the TV that I try to watch in order but lately can't find the time to.

oh, yes noel, Oro Plata Mata has this all-mainstream directing style in which most of the directors have adapted in to. What I love about it, and what I always loved about Gallaga is his take on eroticism. I just love the way he did that love scene at Oro and so in Scorpio Nights.

there are still a bunch of O'hara films needed to be redistributed. anyways, Have you watched Avellana's Pag-asa? you got any reviews of it?

I haven't gotten around to writing about Pag-asa, sorry.

Oro's directing style isn't in vogue nowadays--shaky cam and chop suey editing are what's in fashion. But I agree on his sex. Heard that he had them choreographed by a stunt man. Well, they're shot and edited like action scenes, anyway.

"But I agree on his sex. Heard that he had them choreographed by a stunt man. Well, they're shot and edited like action scenes, anyway."

Haha...that was funny/clever..could be a line from a Tarantino movie..read somewhere that Peque Gallaga hates Tarantino and said that, that was the whole point of Pinoy Blonde-which was misread as him chanelling Tarantino.

He hates Tarantino? That's news to me. Judging from Gangland he was channeling Tarantino there too.

and hates Rodriguez too..I also thought so when I saw Pinoy Blonde. His point is how can you make a good movie by copying from others..that Pinoy Blonde was his how-to-make-a-bad-movie-movie.

With Tatlong Taon, it has photo gallery, stills from the movie for bonus. Bakit Bughaw ang Langit was way better though..video quality-wise.

I concur...prefer the OP theme arrangements of the Ninth & Tenth Doctors

Iiiit kind of grows on you. I wrote this goodness knows how many years ago. I like the present music and credit sequence actually.