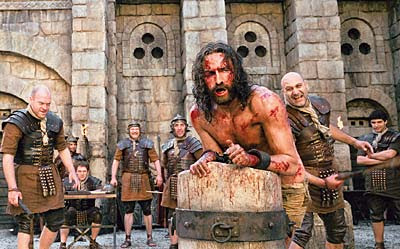 Don't even want to talk about the kinkiness of this image, taken from Mel Gibson's snuff flick
Empire's 50 Worst Movies

Was going to talk about how the list has no historical perspective, that it focuses on big-budgeted Hollywood movies as usual, and so on and so forth.

Wanted to disagree on some choices, assert that Heaven's Gate was more a great folly than a bad film (that rollerskating sequence cited is breathtaking), that Raimi in Spiderman 3 did a better job evoking a giant anthropoid loose on Manhattan than Peter Jackson ever did, and that the worst film ever made (and believe me the competition for this honor is fierce) is Mel Gibson's The Passion of the Christ, whose many historical and biblical inaccuracies, and merits as a motion picture I talk about here. Then I thought about it and thought about it and thought about it and realized--that list is right.

Oh, I disagree with a few titles here and there, would rearrange the whole thing, and would honor Gibson with not one but two entries (the second being his racist Apocalypto), but the list is good, excellent even--a first from a not very respectable, much less credible, source. In short, on the subject of the worse films ever made, for my money Empire is right on the money.

Saw Clash of the Titans, have two things to say:

1) I miss Ray Harryhausen, now more than ever, and;

* I'd first proposed this to Tony Rayns in Jeonju--that Filipinos are not fond of making monster movies (other than vampires, manananggal, and various other creatures depicted by stunt men in rubber suits) because they do not always have the desired effect.

Filipinos are a hungry people, food-crazy and startlingly adventurous; if a swarm of killer bees, or rabid dogs, or bloodthirsty piranhas, or marauding birds, or what-have-you ever got loose on the streets (or waterways) of Manila they wouldn't get very far without being clubbed down, sliced thin, and served up sizzling on a hot plate with a ramekin of soy sauce and fresh-squeezed kalamansi. Filipinos don't see the various giant creatures in classic Hollywood movies as monstrous, or a threat; they see them as bar chow.

How to Train Your Dragon

, Dean Deblois and Chris Sanders' animated version of the book by Cressida Cowell

is in many ways a dumbed-down adaptation--reducing the thorny give-and-take between dragons and Vikings to a hunt-or-be-hunted situation, and Hiccup and Toothless' relationship into something altogether more sentimental, a Boy and His Dog bonding in vast forests.

All that said, it's surprisingly entertaining--the eponymous dragon is a sleek, black-scaled wonder that acts like a sleek, black Porsche 911 with the temperament of a puppy dog; Jay Baruchel's voice acting grounds the picture with its earthy line readings, its often funny hemming and hawing (he sounds like Woody Allen shot up full of hormones). Possibly its best ideas--know your enemy, he may have good reasons or might not even be an enemy--are taken from Hayao Miyazaki's Kaze no tani no Naushika (Nausicaa of the Valley of the Wind, 1984), only without Miyazaki's philosophical rigor and moral complexity.

Not bad--not on the level of Miyazaki, of course, but not bad. Prefer this over any of Pixar's recent offerings, or James Cameron's overblown jungle epic.
at 5:25 AM

hahahaha... your observation about how Filipinos will kill monster animals is funny, but i absolutely agree with it.

Hey, that Kraken is just an oversized calamari for me.

"Possibly its best ideas--know your enemy, he may have good reasons or might not even be an enemy..."

Conservative pundit Jonah Goldberg was deeply offended by the film's promotion of that idea. See his column in today's L.A. Times. (4/6/2010)

That is an excellent observation about how Filipinos would treat giant monsters. I'd try the Kraken Adobo.

Y'know, for some funny reason I've stopped liking inadobong pusit, or squid stewed in its own ink with garlic and vinegar. I'll have mine grilled, thanks, and lightly. Preferably with the roe--remember eating the Kra, sorry, squid with the roe still inside? Yum!