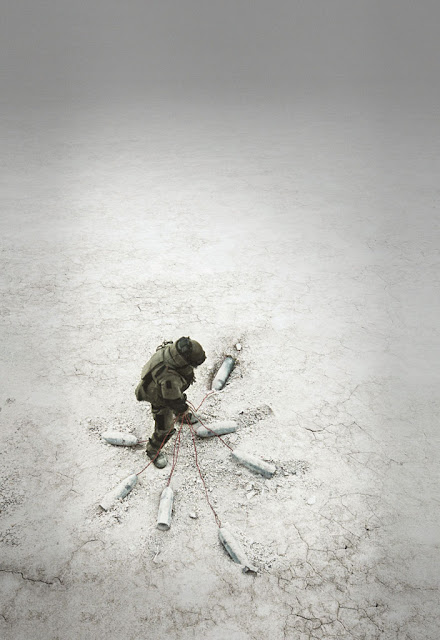 Yes it is; that's what it's all about, really. You think not? Let me put it this way--

In 1997 James Cameron won the Best Director statuette for his two hundred million dollar superproduction Titanic--went up to the stage, thanked a few people, raised his gold-plated phallus symbol high in the air and declared “king of the world!” And he was right to feel that way--the movie still had to win Best Picture, earn a few hundred million more dollars to become the biggest boxoffice hit in history.

Fast forward to 2010. Cameron is again nominated, again for the biggest boxoffice hit in history, the quarter-billion-dollar Avatar. Against him this time, however, is ex-wife Kathryn Bigelow, for her far smaller (a mere fifteen million dollars) Iraq war drama The Hurt Locker--probably the first time a divorced couple competed against each other for the prize, and only the fourth time ever a woman was nominated.

You could read the writing on the wall when the presenter strode onstage--Barbra Streisand, who has been nominated and won everything in sight except the award in question (come to think of it she has never even nominated). When she pulled out the card to read she remarked: “It's about time!” Cheers and adulation. Bigelow's, apparently, were bigger and hairier than Cameron's, and the proof was the gold-plated John Thomas she held in her slim hands.

People remark on how Cameron has created “a spectacular new world beyond our imagination,” how he “pushes every boundary for his vision.” All I see is a quarter billion dollars that could have funded sixteen pictures the size of Hurt Locker, spent instead on the manufacture of a shiny new paint brush (basically a phallus with hair at one end)--a brush that, in my book, Cameron hasn't even fully mastered.

Bigelow on the other hand deals mainly with the humdrum real world, only in her hands the world is hardly humdrum--it vibrates with menace. Bigelow's style here may evoke the Paul Greengrass school of action filmmaking--all shaky-cam, with ADHD editing--but when Guy Pearce in a brief walk-on cameo walks cautiously down the railroad track in his Kevlar-and-blast-plating-clad bomb suit with what seems like the entire Iraqi community watching, the filmmaker that comes to mind isn't Greengrass but Costa-Gavras, the political firebrand who in films like Z (1969) and State of Siege (1972) employed cinema-verite techniques to thrilling ends. You have the same immediacy, the same “you-are-there” gut feel--the shots of different people staring silently evokes the point of view of a man desperately trying to cover everyone from every direction, knowing it's impossible yet doing his level best anyway. Bigelow veers away from Costa-Gavras when the bomb actually detonates, opting for surreal details such as the earth leaping as if atop a pounded drum, the bomb suit falling forward in dreamy slow-motion (you can't help but notice that the hardened acrylic/polycarbonate laminated visor is spattered from the inside with blood).

I'm not equating Bigelow with Costa-Gavras; the latter wears his leftist politics proudly on his sleeve (and unlike Cameron, he doesn't seem to feel the need to overcompensate for any shortcomings), whereas you often wonder if Bigelow has any politics, even in this movie. It's pro-military in the sense that the soldiers rarely do anything less than heroic; it's anti-military in the sense that Bigelow seems to be trying undercut the main character's machismo by equating his wildman antics to that of a drug addict--but even then, one wonders. The picture is perhaps too thrilling, its seven setpieces (each a bomb or situation of increasing complexity and lethality) too effectively drive out rational thought in favor of the idea that at any moment, at any time, and for any reason, the person you happen to identify with most closely (Staff Sgt. William James, played with live-wire panache by Jeremy Renner) may be wiped off the face of the Earth (Henri-Georges Clouzot's Le salaire de la peur (Wages of Fear, 1953) anyone?).

The explosive climaxes in this picture are thuddingly real--no gasoline flames, only smoke and flying debris and a huge thump! as if a giant hand had shoved you hard in the chest. The bombs are often thoroughly phallic--huge cylinders impassive in their lethality; Sgt. James' struggle to master them is basically a pissing contest among Alpha males, his way of saying to the Iraqi bombmakers “mine are bigger and hairier than yours.”

Then there's the question of psychological realism--Sgt. James could not have become a veteran EOD (Explosives Ordnance Disposal) officer by being such a cowboy. As several actual members of the unit have noted, a vast majority of bomb disposal operations are carried out by robots--a man doing otherwise is either quickly demoted (for deviating from standard procedure), or blown to little pieces. A living, breathing Sgt. James shouldn't exist--he is , in effect, a walking contradiction. Renner does manage to invest his officer, implausibilities and all, with a charisma that helps sell the man to the audience, but that's Bigelow advancing her movie through style and sheer momentum rather than solid characterization. What style, though--easily some of the best of the year.

If Bigelow's is the biggest and the hairiest--if Bigelow is this year's 'Cock of the Walk'--allow me to point you back to the year 1949, and Michael Powell and Emeric Pressburger's The Small Back Room. Talk of twisted bomb disposal experts, Powell and Pressburger's World War II film has David Farrar, who possessed the most impressive pair of brows in all of cinema, tormenting himself for the loss of his leg (he wears a prosthetic); meantime the Nazis have been dropping strange black cylinders all over the countryside, killing people (children especially) when they pick up the devices. Eventually Farrar in his self-hating trajectory will encounter one of these cylinders, and may the hairiest, most potent phallus win.

Powell and Pressburger use realism with just that much dash of stylization to present their story; unlike Bigelow, their hero is a fully formed character--contradictory at times, but when all pieces are assembled, fully coherent. He makes sense, he makes you care for him despite his monstrous self-pity, and when he puts his life on the line on the sands of Chesil Beach, hands locked in mortal struggle with yet another of the Nazi black cylinders (the most sinister of the phalli yet mentioned), you may perhaps for the first time find yourself dwelling on the full significance of the word “breathless.” Highly recommended (and available on DVD), though Bigelow's The Hurt Locker isn't a bad alternative--in fact, the two would make for an interesting double feature. As for Cameron's oversized turkey--I'd be glad to tell him what he can do with the three decidedly minor gold-plated phalli he won last March 7, only this is a family-oriented newspaper.

Kathy is quite familiar with Michael Powell and greatly admires The Small Back Room in particular.

I don't see the influence--but that's cool to know anyway.