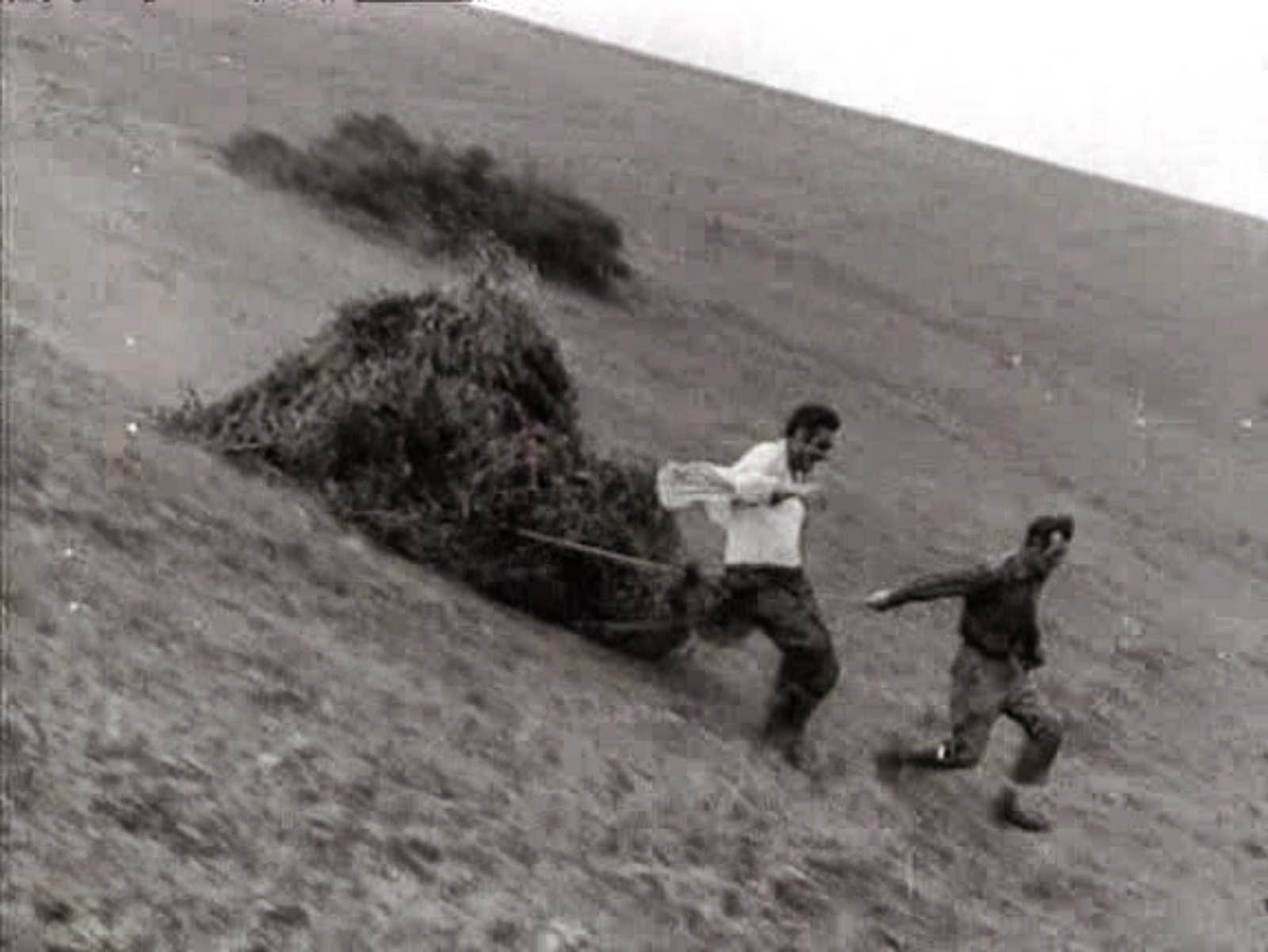 Artavazd Peleshian's films mostly run not longer than ten to thirty minutes, the longest (Mer dare (Our Century, 1983)) going on for almost an hour. They're what he (describing his Vremena goda (The Four Seasons, 1975)) calls a "cardiogram of the national soul and character" of Armenia, his native land.

He's considered the inventor of distance montage--what that is, I'm not quite sure, though I've googled it a little. Judy Bloch, writing for the Berkeley Art Museum/Pacific Film Archive, calls it a "counterpoint over time of images and sounds," claiming it creates "rhythms and moods his predecessors (Vertov, Eisenstein) never attempted." Gregory Pearse and Maria Wagner in cinemaseekers notes that he's often categorized as an "experimental documentary" filmmaker, but seem to subscribe more to fellow Armenian filmmaker Sergei Paradjanov's view that he's "one of the few authentic geniuses of cinema;" that his cinema--or the cinema he creates by means of distance montage--is really "built entirely on the intuitive association between the images." In short, "it utilizes the ability of the spirit to "understand" reality instead of the ability of the brain/intellect."

Asking Peleshian himself doesn't seem any more helpful; his answers are as maddeningly vague. "In Eisenstein every element means something. For me the individual fragments don't mean anything anymore. Only the whole film has the meaning." 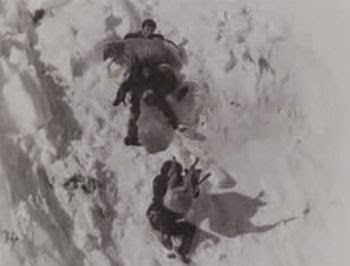 Mm-hmm, yep, sure; now I get it. The JIFF catalogue describes it as "A piece of montage. There is no meaning of pieces; it has a full meaning only when each scene is put together," which seems to take off (however awkwardly) from what Peleshian himself is saying. So it's with this headful of confused and contradictory notions that I sat down (with Mr. Peleshian and his wife some rows behind me) to watch some of his films.

Obitateli (Inhabitants, 1970) intercuts footage of birds taking flight--thousands of them spreading their wings across the screen in such a woosh! of air you want to cover yourself--with huge closeups of caged animals (you catch glimpses of bars here, there), wet, dark eyes staring straight at the lens; the contrast between freed and incarcerated creatures is striking, dramatic. Vremena goda (Four Seasons, 1975), his first to eschew archival footage in favor of footage shot by his cinematographer Mikhail Vartanov, opens with a shepherd in a raging river, struggling to keep hold of his sheep; the rest of the film continues its downward plunge with more shepherds sliding down cliff faces with more sheep, farmers dragging huge haystacks down alarming inclines, and so on. The sense of hurtling motion, of life unstoppable, of energy and will pulling and shoving forward and down is overwhelming. Peleshian scores the whole thing to Vivaldi's Four Seasons, of course (with additional use of Armenian folk music); I can't imagine anything else will do. 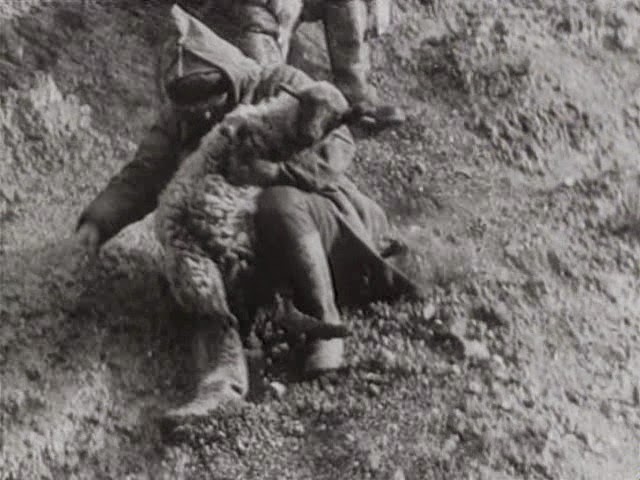 Kyanq (Life, 1993) is one of his simplest, his first and only one in color, and easily his most moving--a record of a childbirth. A lesser filmmaker would train his camera downwards, below the waist, and chronicle the child's passage out the birth canal; Peleshian focuses his lens on the mother's face, on her suffering and pain, with a heartbeat (hers?) pulsing on the soundtrack. To call it a great performance would be to cheapen it, demean it; it's simply a mother giving birth, no more, no less, and half the art (I think) is in Peleshian recognizing that in her face is the source of the film's true power.

Verj (End, 1992) is often (and it would be appropriate) called his last film (on this point things get confusing--both the JIFF catalogue and some websites say it isn't (that would be Kyanq), imdb.com says it is). The film's almost as simple as Kyanq: a train rushing through a tunnel, and in the distance is the suggestion--the merest hint--of a light. The finale is inevitable, almost superfluous, but Peleshian builds up to so much tension--with engine roar and whistle shriek and tiny blob of light--that when it finally comes, it's a stunning epiphany.

I can almost see what people mean when they say what they say; it is an intuitive cinema. Peleshian connects images together but not in a logical or narrative sense--beyond narrative? Supra logical? For want of a better term one might have to settle on the word "spiritual." The separate shots cohere and gain full meaning when the puzzle pieces are in place, and the picture is seen whole (think Susan Alexander and her endless puzzles--or, if you will, the structure of Kane itself). What's missing from these and other explanations, really, is what's missing when you get up to leave, that little je ne sais quoi that spells the difference between talking about the film and experiencing it, and it's on that difference, I think, that most of us founder when trying to talk about what Peleshian has done.

What I can say about his films is that there's a grandeur, a magnificence that doesn't put itself above its subject--no, it's clear that despite the amplitude or magnification of motion, size, intensity, Peleshian's sympathies are with what he's shooting. He doesn't assume the godlike viewpoint, though there are qualities of that in his imagery (thanks to the use of telephoto lenses--"for candid shots" as he puts it), but by avoiding voiceover narration, by refusing to pronounce judgement on them, by instead depending on music, or an accepting silence, he, well, exalts the images, lends to them a more intense appreciation ('Exalt?' 'Godlike?' Is it possible that religious connotations are unavoidable, perhaps should even be embraced?). Not many novelists can do that--I can think of Tolstoy, maybe, and parts of Hugo; not many filmmakers too--oh, Renoir comes to mind, as well as Welles, Ozu, Mario O'Hara.

And that was that. The house lights came up. I saw Mr. Peleshian, leaning on his wife, glumly making his way to the exit. I had to do it; I put out my hand--"I enjoyed your films very much, sir!" He shook hands, smiled briefly and nodded, and left. Feeble tribute, I know, but as I've been trying to say all along, it was hard--impossible, maybe--to put it all in words. 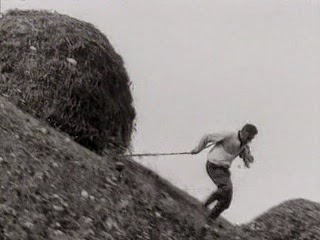 Johnnie To's Fong juk (Exiled, 2006) is easily the most fun I've had of any film in the festival--but I've always been partial to To; he's a more dependable storyteller than John Woo, a more intense dramatist than Tsui Hark, and a wilder fabulist than the low-key Ringo Lam. I've always thought he'd be the shoo-in for a Hollywood career, and wondered why he's never taken the plunge, unlike his filmmaking brothers.

In the letter To wrote for the JIFF's closing ceremonies, he had said he wanted to "relax, make a fun film" and I think it shows; unlike the grimly realistic Hak se wui (Election) films this one is almost all bombast and romanticism, Sergio Leone style; it even has some of the European architectural motifs you'd catch in the corner of your eye in Leone's work (the film was shot in Macau, and makes full use of the exotic Chinese-Portugese ambience), some of his sweeping camera moves (a character doesn't just walk into a room, he glides into it, with the camera as his magic carpet), and of course the harmonica (you almost expect to spot Charles Bronson hidden away in the shadows with his legs crossed).

The spirit may be Leone, but the plot is almost pure Peckinpah--the criminals past their prime, the hunt by a higher power, the desperate heist, the heroic turnaround and rescue--all are there. If you ever wondered what The Wild Bunch might have looked like if Leone had directed, wonder no more; To has done it on behalf of both legends.

The film's self-referential nature isn't as annoying as if, say, Quentin Tarantino does it; with Tarantino, you get all references and little else (well, a mysognistic, rather sophomoric sense of humor, I suppose). With To you get style, and the smarts to play the references with or against that style. Hence the climactic shootout--you go in primed by all the parallels to The Wild Bunch expecting a grand bloodbath, in slow motion; To plays it the other way, perversely, almost tosses the whole thing off one shoulder, and focuses on two details: the fate of a wife and child (strange, how Hong Kong cinema is so much like Filipino cinema in that respect--the survival of the family being of prime interest), and the development of an instant photo. It might be argued that this is what the film really is about, actually--the collecting or gathering together of photos for an album filled with unforgettable memories. Wonderful, wonderful stuff.
at 9:11 AM

Great post on Peleshian. He is truly a genius. But his reclusive behavior is causing a lack of recognition in the artistic community.

Thanks. I met him in Jeonju; shook his hand. He didn't speak, unfortunately.

Got this attempt to comment on this post, was thinking of rejecting it offhand, decided to publish it anyway, it's so nutty:

Aston Villa rode their luck at Hull City where an 88-minute own goal from Kamil Zayatte saw them leapfrog three points clear of Arsenal and into fourth place in the Premier League wow gold with a 1-0 win.

Villa had to survive Hull penalty wotlk gold appeals for a handball against Ashley Young in time added on, television replays showing that referee Steve Bennett wow gold correctly rejected the claims after consulting a linesman.

Bennett had been involved in controversy after just five minutes when American goalkeeper Brad Friedel looked to have handed Hull the initiative and threaten Villa's return to the Champions League qualifying wow gold zone.

Friedel spilled the ball under pressure from Nick Barmby and stand-in right-back Nigel Reo-Coker turned it into his own net as he attempted to wow gold clear.

But Bennett cut short celebrations at the KC Stadium -- and let Friedel off the hook -- when he ruled out the score for an wow wotlkapparent infringement by Barmby.

Promoted Hull were looking for only their second win in 11 games while wow gold Villa arrived unbeaten in seven and it looked to be heading for a goalless draw when the home side suffered a cruel late blow.