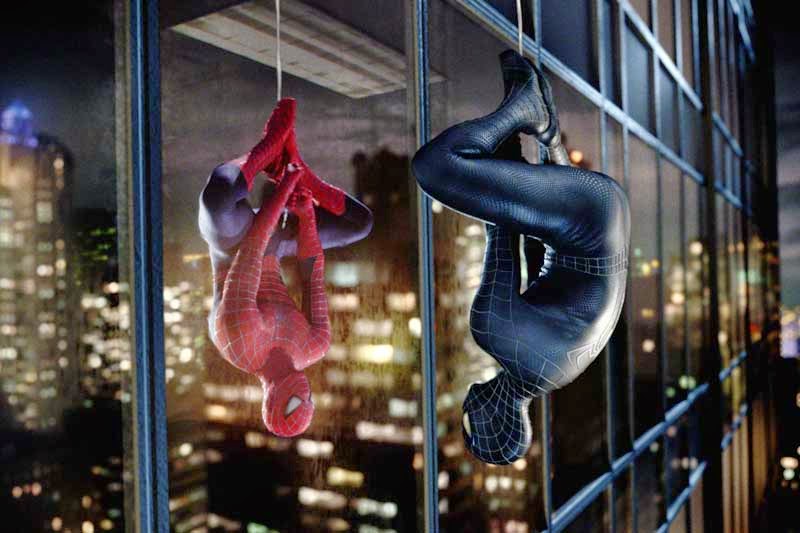 If you look at the reviews, the responses seem fairly consistent: "tired," one critic wrote; "by-the-numbers" another observed; "clearly not enjoying himself" a third one notes. Possibly they're projecting their own reactions to the film onto the filmmaker; that said, this is easily the most unwieldy installment in the franchise yet.


Roughly half of it promises to be good--Raimi obviously has a great deal of affection for The Sandman (Thomas Haden Church); he directs the actor as if he were Henry Fonda playing Tom Joad in The Grapes of Wrath--a tragedy on two legs--giving him a creation image worth of Genesis (The Sandman, rising out of a sand pile like an apparition in a desert storm), and a climactic confrontation that through sheer grandeur beats anything Peter Jackson tried in his far more bloated King Kong remake (there's nothing like lighting your monster with spotlights from underneath and giving him a rippling-sand surface, including the occasional wandering hollow block (oddly enough, that rippling effect hearkens back to an unintentional (but still remembered, still beloved) side effect found in the original Kong model, back in '33)).

The symbiote from space that lands oh-so-conveniently behind Peter Parker's car (Too fantastic? In a movie about a youth turned superhero through a spider-bite?) seems like an equally interesting challenge, for two reasons: 1) it gives Raimi a chance to pay homage to (rip off?) both Superman 3 and The Blob; 2) it enables Raimi to play variations on Maguire's Wholesome Boy image, paint our hero a few of shades of gray, perhaps even do a few song-and-dance numbers, though the end results aren't all that appetizing (possessed by the evil alien blob, Maguire turns into John Travolta). Even James Franco as Harry Osborne (who I often disliked, mainly because his one-note "Spiderman must die!" mantra grew old in the second movie) finally gets his moment of glory setting Maguire up for a fall, then flashing his James Dean smile (a Franco trademark) at the humiliated Maguire through a cafe window (though I'm less happy about the amnesia bit--what was that all about again?).

I'll give credit to Raimi for trying to visualize what fighting on a swinging web line must be like: at every point in their battles you're aware that the hero isn't flying, he's flinging himself, from building to building, and that at any moment he could fling himself too far--or not far enough--miss, and spatter himself all over the New York city pavement. Raimi cuts a tad too quickly for my taste here, (in his Evil Dead movies I thought his editing was better--lively without being extravagant), but his swinging footage has a jerky, nervous energy all its own. I'm not happy with the CGI, but to Raimi's credit he seems more master of them than mastered by them, less concerned with making the effects realistic and more with having junky fun with them, trying to capture--and surpass--the helter-skelter quality of the battles found in the comic books.

The odd man out in all this, apparently, is Topher Grace's Venom. Two predicaments (The Sandman, an alien symbiote) is stretching things; add an ever-present threat (Harry Osborne) and you're really pushing it; throw in yet another supervillain (Venom) and that's the straw that breaks the spider's back. I'm not ready to accept or try feel any sense of menace from said character, much less feel any sympathy for him (the way I'm asked to do for, say, The Sandman); at the point when he's being created (roughly more than halfway through the picture), it's time to pull things together into something resembling a reasonably tight resolution, not add more complications to the mix (speaking of coincidences, what was he doing praying in the same Catholic Church where Parker was struggling with his symbiote? (Yes, I mentioned--and dismissed--the unlikeliness of coincidences earlier; I also mentioned something about spiders' backs)). Even Venom's eventual fate feels arbitrary, tacked on (The Sandman's, however, seems beautifully melancholic and ambivalent).

As for the actors--Maguire does well enough, until he tries to do bad; Dunst still screams helplessly from the sidelines (I'd call her bad singing a masterpiece of characterization though, if I were more sure that it was characterization); Bryce Dallas Howard looks nice but seems more like an obligatory add-on (if I remember her character right, she was very important to the comic book). J.K. Simmons is given much more to do (always a good thing), and does it well; ditto Elizabeth Banks (last remembered trying to sweet talk her monstrous hubby into lowering his guard in James Gunn's Slither) and Mageina Tovah (not to mention that to these jaded eyes they're both quite hot).

I've heard criticism of the movie's morality and while I can't dispute specific points, my knee-jerk reaction is: holy moley, what's the big deal? When there are movies out there with far more questionable baggage (Apocalypto, anyone?)?

Speaking of moral issues--Stan Lee does his usual cameo in this picture, and as usual my short hairs bristle at the sight of him (so when's he going to finally give due credit to Kirby, Ditko, et. al.?).

Overall, it's passable entertainment, but the evidence at hand suggests that maybe for the fourth installment they should be getting some other filmmaker.
at 8:14 PM

I think the Spiderman franchise is the best comic book to screen translation yet, including all instalments. My favourite was no. 1 but nos. 2 & 3 were quite good too, in my opinion.

As far as coincidence (symbiote landing near Peter), etc, this is pure comic book reality. I look at the films, not so much as films per se, but as comic book stories come to life on screen. Raimi has captured the essence of Spiderman in a way I find highly commendable.

Maguire (who I liked long before Spiderman, and prefer to see him in understated small films) plays Parker with just the right downbeat pathos, humour and other character traits.

As I mention in my short article, my only real complaint about no. 3 was the length.

My favorite comic book into film adaptations have always been 2) Altman's Popeye, and 1) Burton's Batman Returns. Del Toro's Hellboy should be up there somewhere, if I ever bother to make a list that long.

People who've been reading me long enough are probably rolling their eyes about now--"so what else is new?" Also probably questionable that a respectable critic would go so far as to have a list of best comic-book adaptations, but I've never considered myself respectable, and if I have to bore everyone with a list I whip out at every excuse at least I bore em with a piddling short list, so I've got no problems on either count myself.

Some thoughts on the film

Noel, a respectable critic can write on whatever film he or she chooses, be it high art or Hollywood blockbuster. Each has its merits. But I'm not saying anything you don't know. ;)

Personally, I see and write (non-professionally) on mostly non-mainstream films but I also saw, enjoyed and wrote about Spider-Man 3.