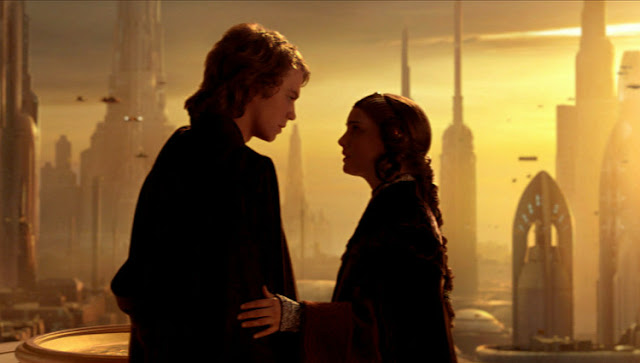 
A piece of Sith

Hold me like you did by the lake on Naboo
Tell me that you love me and your love is still true.
You saw the Phantom mess, the Clones waded through
Don't leave while you got a dollar left to woo.

I've done all you wanted, what's left for me to say?
Double the action, thrice the CGI frappe.
Even got Tom Stoppard to make the drama play
(Though did he make a diff'rence? Can't tell either way)

Don't the FX matter, the ships that go "wheet!"?
Don't all that magma heat the soles of your feet?
Don't the colored flashlights send tingles up your seat?
Wasn't all that money spent good enough a treat?

Even put a polit'ckal subtext in for free
'Bout how "if not a friend, then you're my enemy"
Michael Moore it ain't, but wait a week or three--
My inbox'll fill with right-wing calumny.

My bro Coppola got me a dialogue coach
'Cuz he knows I'd rather handle a robot roach
So what if I let Hayden in his worries poach?
Humans are always so damned hard to approach.

But enough! I've called in the real big guns now;
Recycled the best stuff from Star Wars, and how:
Like that double-sunset, and James Earl Jones' voice--wow!
Can't you tell that I'll do anything for thou?

Don't you say that we're all done, that we are through
Four movies, and I still can't get through to you.
What do you expect, when I can't even spell "poo?"
Please--hold me like you did by the lake on Naboo

Boy this one takes me back to 10th grade English class. "Analyze the meaning of the speaker's references to the lake at Naboo."

And Tom Stoppard really worked on that thing, we are told. I guess that's why "Sith" me feel as I'd just saw through a twelve hour play about the history of the Russian revolution after it was over, only all I learned was that it's apparently all right for Jedi to have sex as long as there's no emotional involvement.

No, the thematic parallels with "Rosencrantz and Guildenstern are Dead" are not apparent at first glance.

Stoppard's done so much good work I can't help but be impressed, but his screenwork is less than stellar, I think. You don't love Brazil for the screenplay, for one; Billy Bathgate was a bore; Empire of the Sun totally missed Ballard's point; and much as I like the idea behind 'Rosencrantz,' I think Gerardo de Leon beat him to it by a couple of decades with his Sisa.

I found the new Star Wars trilogy immensely troubling. I readily admit to being raised by the original trilogy, and though my taste in films has shifted since childhood (thank God, or else Crocodile Dundee would still be my favourite film), I wanted to enjoy the new trilogy even though I was certain it was going to suck. And when the new films did suck I defended them more to protect my childhood memories than of admiration for the films themselves. It's quite difficult when nostalgia overwhelms your critical sense (it tends to tarnish your credibility); thankfully it doesn't happen very often...

Which brings me to another pseudo-point. Why is it that most mainstream film reviewers (I hesitate to call some of them critics) talk about films being "critic proof" without analyzing what exactly makes a film so? "Ah, Shrek the Third is critic proof, so why should I say something about it?" And yet they have to say something about it, and treat it as if it had some dignity; but instead of going through the motions why not say something else? Wouldn't it be great if say, The New York Times actually did write something like, "Shit sandwich" or "Shit the Third"? Perhaps then newspaper reviewing would give itself some power, and maybe studios would try a little harder.

I suppose what I'm trying to say is that the way you have written about these Star Wars films and Spiderman 3 is justified: Sam Raimi deserves to have his work treated with a degree of respect while Lucas gets whatever he gets. There is a critical hierarchy (snobbery and elitism can actually be virtues) and that there is something seriously wrong when a reviewer or publication devotes as much space to Shrek the Third as it does to Army of Shadows. Is it an inability to distinguish between high and low art or simply a refusal of distinguishment? And if it is a refusal then it is a refusal of democracy.

Basically, it's laziness. They can't say anything new about the latest piece of shit, or they're overcome by the feelign it's useless, the thing'll make money anyway, so they shrug and say it's critic proof.

But movies weren't meant to be critic proof, nor were critics meant to pull down or make films; they just present an alternative viewpoint, that people can take or leave. Or they can guide people to lesser seen films that are worth a look. That's all.

Maybe another reason for their attitude is that they entertained notions that they had more power than they really had. About time they were brought down a peg or two.