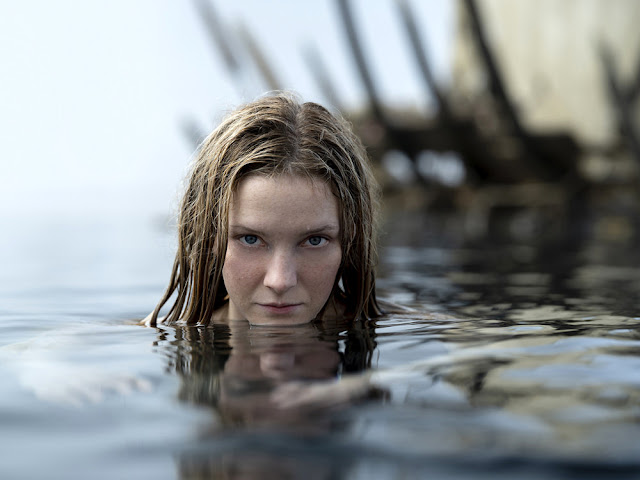 First two episodes of Rings of Power and it's like I'm back-- back to Peter Jackson's The Lord of the Rings and The Hobbit, back to Middle Earth and Sauron and elves and dwarves and Hobbits (Harfoots here), to the books I read in high school, again in college, a third time this past few years.

The Hobbit starts with a funny little man visited by annoying strangers (actually a company of dwarves and a wizard), only to be thrust out his doorway into the wider world, leaving his hat behind; the tale grows darker and more epic with appreciable grace and lively pace till five armies from five races face each other on the battlefield, with eagles and giant bats flapping overhead. The Lord of the Rings took a vivid brief episode from the earlier book (a riddle contest between hobbit and repulsive froglike creature) and expanded it into a deadly serious quest to destroy the One Ring That Ruled Them All (complete with brief but ominously cadenced poem partly inscribed on the ring's inside curve).

The power of said ring loomed over not just Middle Earth but the entirety of the fantasy genre for some seventy years; readers delighted to Tolkien's descriptions of lumbering Ents and swarming Orc armies and vast leatherwinged creatures emerging from deep mountain mines, wielding flaming swords and fiery whips.

High school me was impressed; ditto college me. Recent me-- I don't know. Dipped into some of the literature that inspired Tolkien (Beowulf, Macbeth, Homer's epics (no one actually names the Greek poet but suspect he has influenced us all, at one time or another)); read some of Tolkien's contemporaries (C.S. Lewis' The Chronicles of Narnia, T.H. White's The Once and Future King); read fiction that's been inspired in turn (Ursula K. LeGuin's Earthsea series, George R.R. Martin's Song of Ice and Fire) and Tolkien in comparison to what came before during and after falls frankly flat. His grand passages don't have the harsh splendor of The Iliad or the atavistic intensity of Beowulf; his depiction of evil isn't as vividly realized as Shakespeare's ("Will all great Neptune's ocean wash this blood clean from my hand? No; this my hand will rather the multitudinous seas incarnadine, making the green one red"). Passages involving Frodo and his beloved manservant Sam crossing the wastelands of Mordor have a poignant tang, but nowhere near the power to move that Priam does when he pleads to Achilles to return his son.

The Lord of the Rings recasts fantasy in its image-- and O what a staid straightforward image it casts! At least C.S. Lewis had the cunning to draw from science fiction tropes (interdimensional portals, variable time streams, terraforming) and surrealist imagery (a lamppost in a forest; a vertical wall of water;  a world that gets bigger the further up and further in you go) to create his fantasy effects. T.H. White's version of the Arthurian legends includes a Merlin that travels backwards in time-- the first time Arthur meets him is the last he sees of the boy (Now where have we seen this before?).

LeGuin's Earthsea owes much to Tolkien but in my book improves on him with delicately lyrical prose; George R.R. Martin's Song of Ice and Fire takes its cue from Tolkien in recasting older histories-- in this case The War of the Roses-- as epic fantasy, with unsparing descriptions of sex, violence, dress, and (O yes) food. Using the viewpoints of people young and old, highborn and low, Martin creates a dazzling prismatic narrative where no one is an absolute hero and no one an absolute villain (in Tolkien the elves-- not to mention Aragorn son of Arathorn-- are insufferably noble, the Orcs monochromatically evil).

So this new elaborately staged and shot Amazon-funded prequel-- complete with production design consistent with Jackson's own designs, music complementary to Howard Shore's original score-- feels like more of the same.

O perhaps not entirely same-- the young Galadriel shows spunk, the more ethnically mixed cast is pleasing to the eye (Iranian-British actress Nazanin Boniadi being a particular standout). There's a moment between two peasants and a belowground monster (otherwise known as an Orc) that generates some suspense, and a glimpse into a dwarf household that's more fun than one might expect-- but this is two more hours on top of the previous nine I'm never getting back. I suppose I'll finish-- did finish Jackson's-- and the series might eventually step matters up and surprise me, but it'd help if I had one or two more reasons why I should persist.

Of course I'm more partial to HBO's earlier adaptation of Martin's novels-- for one thing the series is alarmingly well-cast (rattling off a handful of names from many: Peter Dinklage; Lena Headey; Maisie Williams; Sean Bean; Mark Addy; Charles Dance; wonderful wonderful Diana Rigg in one of her last roles), there's no shying away from novel's sex and violence (sometimes even amping things up to an unwarranted degree). Towards the end when the showrunners ran out of Martin to adapt and started assembling their own scenarios the series' dramatic intensity and narrative inventiveness started to flag (same time the digital effects budget started to skyrocket) but I cared enough about the characters that I wanted to see what eventually happens to them.

Part of what hooked me was the humor. Diana Rigg's Olenna Tyrell delivered more than her fair share of wicked asides; Jerome Flynn's Bronn was as quick with the quip as he was with the knife-- but the most common complaint I hear about this elaborate prequel is "I miss Tyrion." I agree; Peter Dinklage's short-statured Lannister was in fact the heart and spirit of Thrones, its ironic commentator and reluctant conscience. Because he often viewed events from a high vantage point (being educated and intelligent and heir to a powerful family) it appealed to Martin's peculiar sense of proportion to cast him as physically closer to the ground than practically everyone else, his worldview correspondingly skewed. Having enjoyed Martin's books more than Tolkien's I'm willing to give this series more leeway, but till they can come up with an equivalent to Tyrion (and remembering Matt Smith from his days as the Tenth Doctor he comes close but no cigar) not certain I'm going to enjoy this as much. 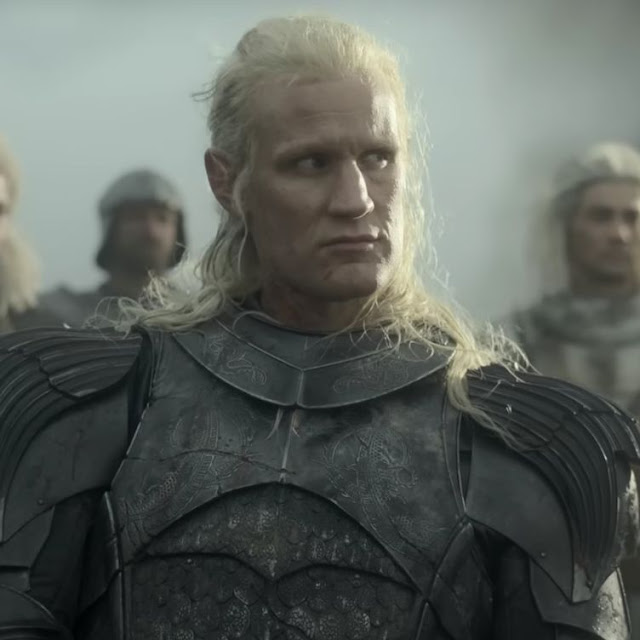