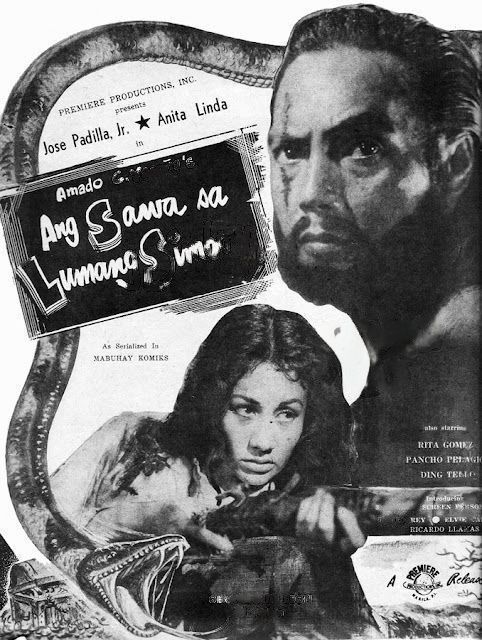 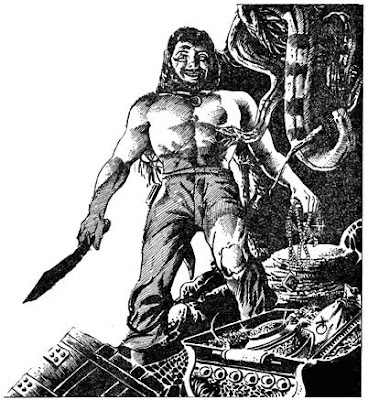 Gerardo de Leon's Ang Sawa sa Lumang Simboryo tells the story of an outsized man: Tulume (Jose Padilla Jr.), former farmer turned bandit when the Spanish Guardia Civil (Civil Guards) kill his wife (this during the years of Spanish rule). Now he's leader of his own gang, with a bounty of thousands on his head.

Tulume (a variant on Tamerlane?) is the kind of character Clint Eastwood or Arnold Schwarzenegger might have played, the taciturn antihero with magic powers (he wields an amulet to bring down deadly pythons from above), a dark bitter past, and undeniable sex appeal. Padilla combines laconic Eastwood demeanor with Schwarzenegger's wall-to-wall chest muscles, plus the added bonus of genuine acting ability (think Daniel Day Lewis' Hawkeye in The Last of the Mohicans). If Tulume is ruthless Padilla suggests that it's a ruthlessness borne of necessity, to evade law enforcement and maintain control over his band of rowdy outlaws; if he seems furious, Padilla suggests that his fury was provoked, that on the whole Tulume would prefer the quiet life if his wife were still alive.

And in fact (this is where Teodorico Santos and Pierre Salas' script-- from the komiks by Amado Yasona-- feels uncannily perceptive) folks nearby sense something different; they know without discussion if a fugitive is truly criminal or someone you can count on for help. As the film begins, Tulume's men bring to him young Sabel (Anita Linda), seeking his aid in rescuing her father, who has been arrested by the Guardia. The rescue is a failure (the father dies before they reach him) but Sabel elects to stay with Tulume, as goad to his conscience and as source of rising tension between Tulume and his men, between Tulume and Marta (Rita Gomez)-- the beautiful fiercely jealous daughter of the gang's former leader. Everything comes to a head when Tulume finally comes to a decision about his treasure-- a fabulous hoard of jewels hidden in the ruin of a bell tower (the century-old church Santa Maria Church, in Ilocos Sur), guarded by his eponymous python. The way he resolves his problem tells us much about Tulume's attitude towards his hoard, towards wealth, towards power in general-- how it can be both powerful blessing and corrosive curse.

De Leon enhances the enchanted air with his inimitable visual style (aided by cinematographer Emmanuel Rojas, who also shot Sanda Wong), all low camera angles (when Padilla leans against his horse the shot is framed so that he looks as if he's clinging to keep from plunging down the mountainside) and lengthy tracking shots of figures lost under an enormous sky. But what allows the film to transcend its genre-- what makes it feel fuller more substantial than fantasies churned out by Eastwood or Schwarzenegger or any of a number of local action stars-- is the rootedness of the fantasy, the way it sprouts from our history of relentless suffering. We know of the tyranny of the Spanish government; we know of men driven to banditry by financial and physical abuse; when we look at Tulume we feel his struggle is ours as well. It's a story we grew up and grew familiar with (Tulume also recalls Cabesang Tales, the oppressed farmer-turned-bandit in Jose Rizal's El Filibusterismo-- which de Leon also turned into a great film), but with a dollop of magic to give it fresh flavor and not a bit of Freudian imagery (a python in a church tower?) to add spice. Possibly the finest Filipino fantasy film I've yet seen. 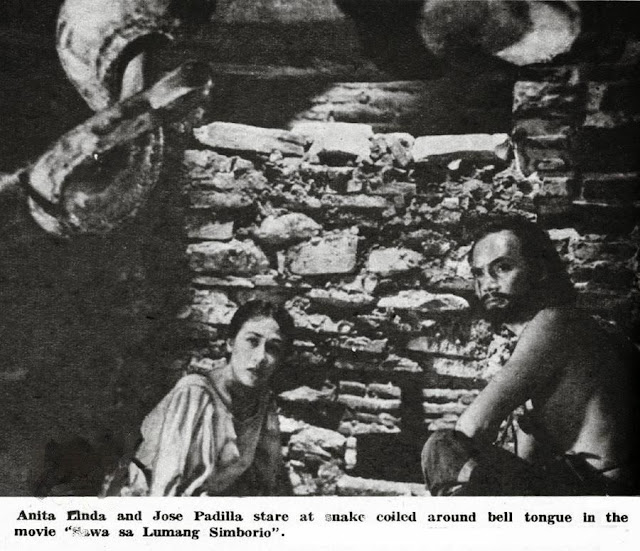 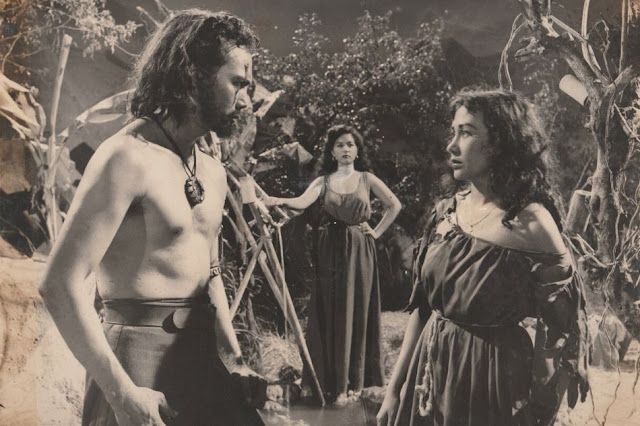