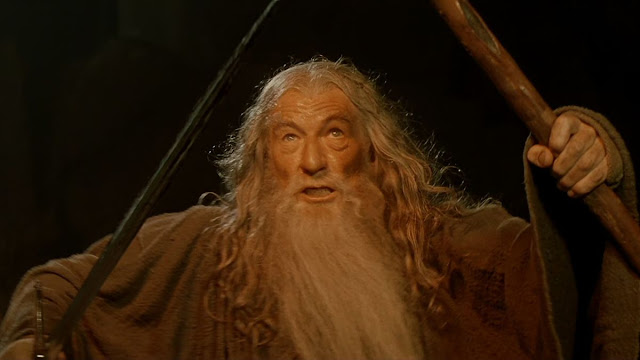 The film adaptation of J.R.R. Tolkien’s Lord of the Rings: The Fellowship of the Ring is a massive undertaking-- 270 million on three pictures approximately three hours each, with thousands of extras, hundreds of locations, endless digital effects… you get the idea. And it’s by Peter Jackson, director of both the exuberantly gross Dead Alive and lyrical at times harrowing Heavenly Creatures, an event we’ve waited for all of last year, freshly arrived in its first installment. And how is it?

The opening is impressive--a synopsis covering two thousand years in the history of Middle Earth (a term adopted from the Norse 'Midgard,' simply meaning 'Earth'), a whirling farrago of clashing armies swirling skies heaving volcanoes. Sauron rears up his magnificently helmed head-- basically Jack Kirby headgear sculpted in living granite-- and the armies of light fall back in fear; Sauron is fatally struck, and a ring of light flashes out like an electromagnetic pulse. One shot begins with soldiers on a high cliff surging to the edge (a few go over, screaming), then the camera veers to glide over tremendous plains teeming with soldiers-- literally ants in a vision by Tolkien, as realized by Peter Jackson.

And yet that opening for all the incredible sweep and detail is, I believe, a mistake. Tolkien opened his novel in the Shire, that obscure corner of Middle Earth inhabited by his unique invention, the hobbit; the action telescopes outwards from there. By starting big, Jackson loses that telescoping effect, the hint of a mundane ordinary world not far from our own (or Tolkien’s) opening into a larger universe. Things putter along in its proper unexcited way till Bilbo Baggins' 111th birthday party and his sudden, mysterious departure; then hints and forebodings, till wizard Gandalf (Ian McKellen) explains with churchwarden pipe in mouth to Bilbo’s nephew Frodo (Elijah Wood) that all is far from well in the world (insert two-thousand year synopsis here).

I understand where Jackson’s coming from, mind; he likely felt he needed to catch our attention outright. The other way would require more subtlety than Jackson was willing to invest, in a project that already promised spectacle on a daunting scale.

Jackson orchestrates the rest of the story-- Frodo’s quest to destroy Sauron’s Ring of Power by casting it in Mount Doom-- with fair skill; you lean back and relax, assured of an intelligent retelling of one of the most popular fantasy novels of our times. Here and there images stand out: the Nazguls-- Sauron's wraithlike horsemen-- move with swords raised just so, perfect for a running glide attack; lovely Arwen (Liv Tyler) flees with Frodo on horseback, Jackson cutting up the chase into something less linear, more metaphysical--

--Isengard, Saruman’s fortress, is introduced with a dizzying shot from the tower’s horned crown (raking the bellies of lowflying clouds) down to its tunneled and mined  bowels (a miracle of intricate miniaturework), where obscene creatures are bred in seething bubbling vats. It’s gothic menace at its least inhibited, and who better to preside over all the malevolence than Christopher Lee, Prince of Hammer horror--

--the elvish town of Rivendell, all grace and serenity (though the woodwork and gardening remind me of a supernatural Martha Stewart), the elves impossibly beautiful. Thank goodness for Hugo Weaving's Elrond, the only one with the brows capable of knitting an intimidating glower ("Mr. Anderson--")

--the mines of Moria and Jackson’s single most impressive sequence, thousands of Orcs pouring out of floor walls ceiling, behind them the vast batwinged Balrog (was Tolkien one of the earliest artists to crib from Murnau’s Faust?) cracking fiery whip over all--

If Fellowship were nothing more than these vividly realized moments Jackson would be appropriately memorialized, but he also (largely) succeeds with the human elements: Ian McKellen's Gandalf, all stringy hair and sidelong glances, the film’s true hero (it’s Gandalf who starts the ball rolling and Gandalf who pays most dearly to keep it rolling); Elijah Wood's Frodo, the film’s heart, his wide-eyed stare the gauge by which we measure how thing proceed from bad to worse (though personally I felt that if Jackson gave us one more giant close-up of Wood’s moist eyes I’d start punching holes in the theater screen). Viggo Mortensen makes for a graceful yet fiery Aragorn, Cate Blanchett an ethereal yet witchy Galadriel.

Then there's Sean Bean as Boromir. Jackson focuses on his story to emphasize the ring's seductive power, and Bean rewards Jackson’s attention with a remarkable performance. Bean’s Boromir is all contradictions-- he condescends to the hobbits, yet is seen playfully training them at fencing; he’s loyal to his king, yet when Aragorn reveals his lineage, Bean allows Boromir a brief glare of resentment--the glare of a servant long comfortable in his stewardship, forced to acknowledge a late-arriving master. This all-too-human Bean is the film's most moving presence; his fate even redeems the film’s climactic battle, a showdown between the Fellowship and a horde of orcs that is poorly shot and edited (for all of Jackson’s range you must remember he’s never directed an action film).

Fellowship is fantasy filmmaking done well given passion, intelligence, a near-unlimited budget. Yet for all its sweep and scale, Fellowship feels safe-- a tale told by a sane storyteller, all elements in place, when what you want is a demented artist smearing his guts all over the wall. Fellowship feels like something the Peter Jackson who made Bad Taste or The Frighteners would have tried to satirize--an orc wearing a “Frodo Lives!” t-shirt would have been a nice start.

Perverse of me to complain that Jackson does too good a job of adapting Fellowship but there it is. You could say he raised the bar on fantasy filmmaking; you could also say that, having succeeded, the bar just isn't high enough.

The Tolkien books have had a knotty development history spanning decades, and it’s said that at one point John Boorman (Point Blank; Exorcist 2: The Heretic; Zardoz) was involved. Boorman didn’t stay long; he wanted to combine characters and cut the material from three volumes to a production with running time of a little over two hours. When his ideas were rejected, he reportedly took the preparation and research he had done and poured it into an older, even more archetypal fantasy.

Boorman's Excalibur (1981) is everything Fellowship is not: unapologetically erotic (spiked crustacean knight humping beautiful blonde) irredeemably strange (owls and caterpillars and serpents gather under a full-moon sky) and bloody beyond belief (arms lopped off spurting wine-red arterial spray), its imagery (done for a mere ten million, in the emerald forests of Ireland) is charged with a crazed beauty that Fellowship can't even begin to approach. Boorman pays a price for that beauty, the grandeur of the Arthurian legends compressed into a headlong narrative that stumbles as often as it runs. But O-- what a rush!  Fellowship is a competently wrought spectacular and I respect all the effort and money involved; just don't feel the same kind of love I feel when sitting down to savor (for the umpteenth time) Boorman's indelible inimitable head trip. 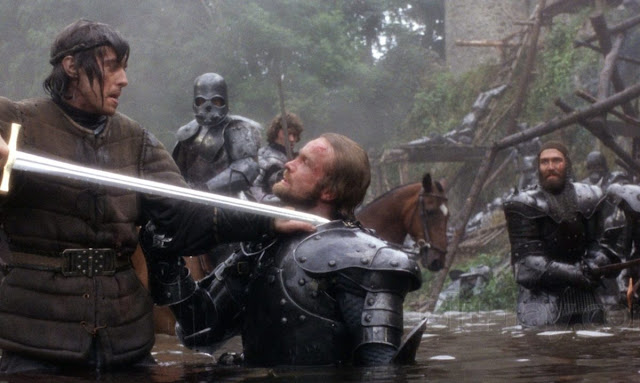