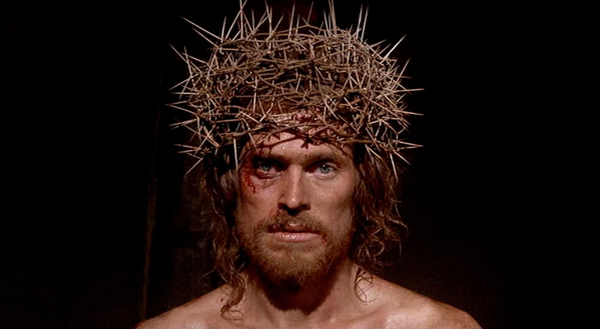 Call The Last Temptation of Christ my favorite Martin Scorsese film-- not perhaps his best or most ambitious, just my favorite. Grew up Catholic, saw many of the classic Jesus movies, liked most of them with little contextual knowledge or sense of discernment. By '88 I'd seen and enjoyed Taxi Driver, Raging Bull, King of Comedy, After Hours; the idea of Scorsese tackling the life of Jesus-- knowing he wasn't shy about using Catholic imagery, or about putting personal beliefs and feelings about his faith on the big screen-- seemed like an especially interesting idea.

That was the theory; in practice I arrived at the movie theater with a picket line blocking the entranceway, folks waving signs like 'SCORSESE PRINCE OF LIES' and 'LEW WASSERMAN CAUSING JEW HATE' (Wasserman was chairman of MCA, Universal Studio's parent company). "Would you like to know the real story of Christ?" a cleancut young man in a necktie asked me, waving a bible. "I read it," I told him, stepping into the theater.

The film itself felt as turbulent-- Willem Dafoe, not so much acting as feeling his way through the role; Scorsese stitching agitated footage together to present a sketch, more courageous than confident, of Paul Schrader's conception of the Nikos Kazantzakis novel.

As Dafoe finds his stride his performance grows in power and authority, and so does the film (to be fair this may have been Scorsese's design all along). Dafoe and Scorsese take their cue from Kazantzakis' novel, which was written in a breathless heavily curlicued style, and dwells heavily-- one might say obsessively-- on almost every episode in Jesus' life, across all four Gospels.

Paradoxically, of all the Jesus films I've seen this may be the most carefully researched: everything from Jesus' hair (cut short and well-groomed in the early scenes, as is traditional with Jewish men of the time; longer and more unkempt as he wanders up and down the Judaean countryside) to the tattoos lining Mary Magdalene (Barbara Hershey) to the crucifixion itself (t-bar mounted on upright post, wood planks pressed on arms to hold nails more firmly in place (driven into the wrist not the palms), legs contorted in a particularly painful fashion-- all consistent with what we know of the earliest crucified man ever uncovered).

Carefully researched-- so why does Judas (Harvey Keitel) speak in a Brooklyn accent? Why does Paul (Harry Dean Stanton) rant like a Bible Belt preacher? And what's David Bowie doing in a horse stable? Against the background of painstakingly assembled details Scorsese and Schrader decide to draw the drama closer to us, work against the musty odor of sanctity that clings to most big-budget religious productions by having the actors recite the plainest dialogue possible, colloquial paraphrases of well-known biblical quotes (Jesus confronting a crowd determined to stone Magdalene picks up a pair of rocks: "Who has never sinned? Who? Whoever that is, come up here-- and throw these." Zebedee steps up: "I have nothing to hide." Jesus: "Good. Take this, it's bigger."). Scorsese and Schrader walk a thin line between the familiar and the fresh, sometimes stumbling into the funny-- tho not always unintentionally (Judas: "The other day you said if a man hits you you'd turn the other cheek. I didn't like that."). Scorsese reportedly wanted to make a film about Jesus since childhood, wanted to make a film out of Kazantzakis' novel since '72, when Hershey gave him a copy-- you can imagine him mulling over the impossibility of the task, considering and rejecting any number of excisions, revisions, variations, coming close to filming in '83 (the financing fell through), finally deciding in '88 that enough is enough.

Somehow it works-- at least I think it does; somehow actors and filmmakers conspire to create an Israel where the coming of the messiah is a burning question on everyone's lips, where all argue scripture the way they argue the Second Amendment-- spiritual issues being as urgent as political issues, or rather spiritual issues are political issues, and the question of whether you want to worship foreign as opposed to the One True God being a question that can get you killed.

If with some films you felt an authorial presence in control of every element-- the works of Bresson and Kubrick come to mind-- in others you feel the filmmaker surfing the crest of chaos, barely in control; Last Temptation feels very much like the latter kind, the only thing keeping the raging whirlpool of mismatched contents (the archeology, the accents, the sometimes tentative sometimes confrontational acting) in check being Scorsese's ringmaster camera. Against the backdrop of Moroccan desert-- the saffron sand, the graysmooth stones-- Scorsese's camera (with Michael Ballhaus as cinematographer) lingers, fades, tracks stealthily, describes whirling dizzying circles. Examples:

Jesus walking the shore of a lake: hears footsteps, turns (camera turning with him), finds nothing but beach. Camera swings back to catch puzzled face. Continues on his way, hears more steps, turns again ("Who's that? Who's following me?"): still more empty beach. Camera glides backwards past Jesus; cry of unseen bird-- Hawk? Falcon?-- and he's knocked to the ground, convulsing. With just camera and Dafoe and no cuts, Scorsese creates a cruel little game of hide-and-seek between a nearly palpable God and his relentlessly tormented son.

Jesus atop a cliff with Jeroboam (Barry Miller) enjoying the sunset. Jeroboam: "God took you by hand and brought you here." Jesus: "You think it's a blessing to know what God wants? I'll tell you what he wants-- he wants to push me over" and following his arm the camera swings away--

--cuts to an overhead shot swiveling from cliff's edge into empty space, looking vertiginously at the rocks below, as succinct a visual summation-- of God's homicidal impulses, of Jesus' suicidal despair-- as one might wish for.

And my single favorite image, the simplest yet arguably most powerful: Jesus bleeding and Judas helping him past a crumbling brick wall in a manner recalling Charlie helping the bleeding Johnny Boy. Welcome to the mean streets of Jerusalem, Scorsese seems to say, where redemption comes at the cost of your life.

The film ends-- yes I'm talking third act but who hasn't heard of what happens next?-- with an angel helping Jesus down from the cross to live the life of an ordinary Jewish man, wife, kids, and all. Much critical ink has been spilled on this digression-- but why, exactly? Because we're suggesting that Jesus actually indulges in bodily functions? The more or less official record covers the last three years of his life-- who are we to say what happened in the previous thirty? And in fact Anthony Burgess in 1979 refashioned his script for Franco Zefferelli's Jesus of Nazareth into his own fable, where Jesus in those hidden years marries and would have had children if the wife hadn't died in a riot; no one raised an outcry at Burgess' extrapolation, why Kazantzakis? True the latter wrote his book in the more conservative '50s and controversy has dogged succeeding editions (and this adaptation), but there's a ferocity to the hate that's startling to behold, as if author and filmmaker had dropped their pants and urinated on a memorial. The opposite seems true I'd say: this is a serious attempt-- not always successful-- to grapple with the question of Jesus' corporeality.

That's what it comes down to anyway; after all book and film aren't titled The Last Privation of Christ. Jesus is offered what he wants more than anything and falls like a house of cards (maybe part of why folks find the book offensive is that the messiah succumbs passionately, whereas in Burgess' novel his marriage is only mentioned in passing). To be fair Jesus was given bad information: the little girl (little boy in the novel) claims to be an angel, bringing news from God that he's off the hook-- who's he to be skeptical, when he's constantly receiving privileged messaging from on high?

Scorsese's filmmaking in this late segment simplifies and becomes almost abstract: apes chase each other across an Edenlike grove; Roman columns stand starkly against a blue sky; the burning of the holy temple is represented by screams and a world turned red (take a bow, Michael Powell). We are presented one image after another: of Jesus naked with Mary Magdalene, in the act of procreation; of Jesus with children (one of them pushing the handle of a wheeled toy); of Jesus old, face wrinkled, hair turned white. We're so used to the image of a young man of thirty it's a shock (to this Catholic at least) to conceive of someone living past his well-known ending.

Then with Jesus near death the deception is made clear: the angel is Satan after all ha ha. You almost feel contempt for how easily the man is fooled but-- again being fair-- he desperately wanted to believe, and likely refused to examine the fine print. Weak and wheezing, Dafoe's failed messiah drags himself heavily across the floor and up the steps while Satan (voice of Leo Marks, who wrote Powell's notorious Peeping Tom) urges him: "Die. Die like a man." To have fallen so easily, to indulge one's dearest wish at the world's expense for so many years, to be humiliated and exhausted and drained of all hope-- the resulting impulse to give up and accept one's fate is in my book the film's real temptation.

How does this compare to other Jesus films? The Gospel According to Matthew is oft mentioned; one can always admire Pier Paolo Pasolini's austerity and still wonder what he might have done with Kazantzakis' novel instead (not sure it would be as funny, and not sure that would be a good thing). I do love Roberto Rossellini's The Messiah with its equally spare style and socialist subtext (Viva Liberation Theology!)-- ask me on a different day and I'd probably give a different answer (Jean-Luc Godard's Hail Mary! is another interesting lowbudget effort, but focused on the mother not the son).

How does this compare to Scorsese's later works? Ah that's a more interesting question. Jesus suffered immensely, but what about the suffering of a man who keeps his faith hidden for decades, under relentlessly watchful eyes, as with Father Rodrigues in Silence? What about the suffering of one who betrayed a good friend, and worse than being unable to express it discovers no one remembers or even cares (The Irishman)? Scorsese managed to make his passion project when he was middle-aged, finds himself still interrogating his faith and still making films as (and from the point of view of) an old man; he may not have come up with many answers, but to his credit he's still asking relevant questions. 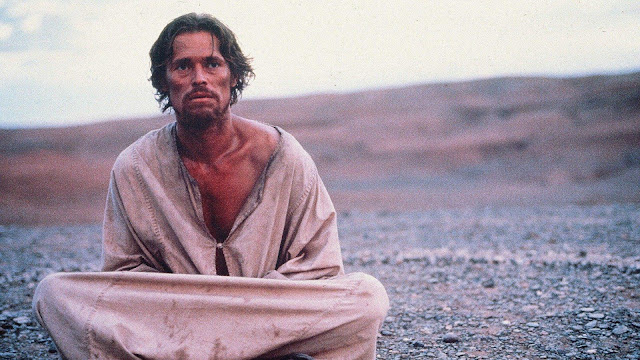