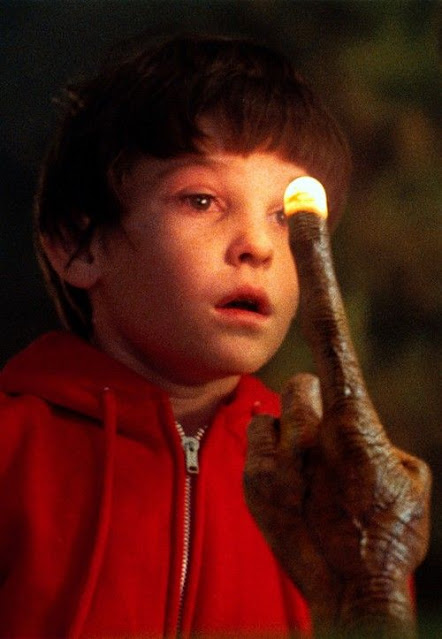 Steven Spielberg’s ET: The Extraterrestrial begins with a vast forest at night: with shadows, rustling leaves, slow tracking shots, and John Williams’ eerily atmospheric music--or so you think, until you realize that it’s really Bernard Herrmann’s opening theme to Orson Welles’ Citizen Kane (but never mind; call it a tribute). There is an alien ship, and creatures milling about the ship. One strays a little further than the others, is fascinated by a glimpse of city lights; we’re fascinated with his fascination. The passage reminds you of some of the better sequences in Disney movies, the way they combine imagery and music to create a twilight world filled with hidden delights. Never mind if the “hidden delight” is merely the hillside view of a California suburb--Spielberg presents it to us, and to the creature, as if someone had scattered a fistful of jewels across a tabletop.

Then men with flashlights arrive, the creature flees, and we see the first evidence of digital tweaking in this, the twentieth-year edition of the film: the fugitive takes short, swift leaps through the underbrush, like a skipping rubber ball. Originally you saw nothing; all you heard was a strange, nerve-grating squeal, and red light streaking through the undergrowth (you wonder how in earlier evolutionary stages it managed to elude predators, what with the equivalent of a traffic light mounted on its chest). It’s a minor reservation really, but Spielberg’s delaying our first, truly clear, full-body view of the alien until much later in the original was a nice touch (a device he earlier perfected out of necessity while making Jaws). It added ambiguity to our feelings, left us unsure whether to regard the creature with fear or pity (hard to fear a bouncing rubber ball).

Then we are introduced to the house and the family in the house--elder brother Mike (Robert MacNaughton) and his friends, playing Dungeons & Dragons; younger brother Eliot (Henry Thomas) wanting to join in; the mother Mary (Dee Wallace) busy in the kitchen. It’s an ordinary family about to have an ordinary dinner, the conversation leaping from one to another like a lightly tossed ball, Spielberg’s vision of the suburban family, caught with all the casual realism of a Vittorio de Sica film.

But ET isn’t neorealist, it’s pop fantasy--realism is the springboard from which the tale takes to the air. Many of the fairy-tale touches are as you remember them--Eliot outside the shed, tossing a ball (and having the ball tossed back at him); Eliot’s trek through the woods, dropping Reeses’ Pieces like breadcrumbs (Eliot shows more smarts than Hansel or Gretel ever did--birds don’t bother with chocolate-covered peanut-butter candies). Eliot’s first real confrontation with the alien, wrapped in a blanket and armed with a flashlight while the creature creeps up to him and then--breathless moment--deposits all the Pieces he had scattered on his lap.

Eliot (with a trail of Pieces) lures the creature up to his room, and (nice touch by Mathison) later proceeds to explain the workings of the world through whatever toy at hand, a microcosm of pop consumerism (“The fish eat the fish food and the shark eats the fish and nobody eats the shark. This is PEZ candy--you put the candy in here and then when you lift up the head, the candy comes out and you can eat it. This is a peanut--you eat it but you can't eat this one 'cause this is fake”). He introduces his elder brother to the creature, but in keeping with the fairy-tale theme (and as partial revenge for keeping him out of the Dungeons & Dragons game), makes him swear an oath first (“swear it, the most excellent promise you can make: I have absolute power--”).

Mike meets the creature, and so does their youngest sister, Gertie (an effortless Drew Barrymore). Eliot shuts them all up in the cavernous closet he shares with Gertie (the army of stuffed dolls arrayed inside are presumably hers), and they peer at their captive. “I’m keeping him,” he informs them, with quiet authority; without any fuss, he has assumed absolute power over the situation. Gertie rebels; she questions why she should keep the creature’s presence a secret. Eliot snatches her doll away from her and hands it to Mike who proceeds to torture the doll. Gertie pleads, crying, promising to be quiet--

--while Spielberg cuts to a close-up of the creature’s face, and suddenly we see the situation through his eyes, as he stares at these mammals asserting pecking order among each other. It’s a moving moment: Spielberg has caught us up so thoroughly in his childlike world that the shift in viewpoint is jarring but instructive--the creature is as fascinated by his captors as they are with him. Later he demonstrates telekinetic powers as he levitates several balls in a crude imitation of planets revolving around each other--a demonstration interrupted when the creature suddenly recoils in fear. So does Eliot; the two are developing some kind of bond, not so much telepathic as telempathic--a connection not of words or thoughts but of emotional states. As Eliot peers apprehensively out the window the creature lays a reassuring hand on his shoulder, the first real suggestion that the bond may be one of friendship as well.

Actually, one might question the telempathy angle as an unnecessary gimmick, to shortcut and sensationalize the developing relationship between boy and alien. Spielberg is able to justify this, I think, with a sustained comic setpiece--suggesting through cross-cutting that the creature (at home and drinking beer) influences Eliot, who (in school and about to dissect a frog) gets drunk and imagines he’s helping his friend by setting the frog free. There are no logical justifications for the sequence, other than showing off Spielberg’s precision editing (and serving as flimsy excuse to intercut footage from John Ford’s The Quiet Man--which, come to think of it, is a perfectly valid excuse). The incident however does drive home to Eliot (and us) the urgency of his pet’s (now nicknamed 'ET') situation--the need to rescue it from unspecified danger.

The danger when it comes is the film’s basic flaw--an elaborate government conspiracy to capture and analyze the fugitive alien. The story demands a villain closer to home, and we almost get it, in the scene where Mike has to tell their mother Mary about ET and Eliot, both slowly dying. “Remember the goblin?” Mike babbles. “Just make the most excellent promise you can make.” Mary simply stares at him; she hasn’t the slightest idea what he’s talking about. Mike precariously straddles the border fence between childhood and adulthood, but the spell of the alien is such that he’s enthralled--so deep inside Eliot and ET’s predicament that, temporarily at least, Mike has trouble speaking the language of adults, speaking in terms his mother can comprehend. So he simply shows her.

It’s a strong moment, a totally plausible moment; Eliot lying weakly beside ET’s chalky-white body, moaning “I think we may be dying;” ET looking up and asking “Mom?” Mary panics, and steps forward to separate her son from the monster; suddenly government scientists wearing spacesuits enter the house through doors and windowsills. The beautiful symmetry of the story has just been violated--instead of two worlds, the magical one of the kids and their alien versus the mundane one of everyday adults, we get an unnecessary third, of military scientists out to capture ET. The effect of this sleight-of-hand is that the fairy-tale doesn’t really end; it’s replaced by a more science-fictional one. The impact of reality’s intrusion is blunted by the fact that it never really intrudes at all.

The twist also absolves the adults from the responsibility of destroying the fairy tale. In the case of the government scientists, they’re just following orders; the one named Keys (Peter Coyote) actually understands (he’s meant to be an older version of Eliot) but is given nothing more significant to do than follow when Eliot escapes with ET. Same with Mary, who might otherwise have developed some real complexity, faced with real issues (Should she help her children keep ET a secret, or should she call in the police? Should she allow Eliot and ET to stay together, even if her son is dying? How far should a relationship between her son and the alien go?). Instead Mary accompanies Keys in trailing after Eliot, yet another impotent adult dithering in the background, slow to realize what’s really going on.

About the restorations and digital alterations meant to enhance one’s experience of revisiting the film: I don’t have a problem with the added footage--they’re amusing, and add insight to the characters. But replacing the shotgun with a walkie-talkie in one crucial moment makes nonsense of the shock cuts employed in that sequence (what’s Eliot staring at, anyway?) and dilutes the strength of the magic-versus-mundane theme Spielberg sets up. And digitally enhancing ET’s facial expressions is an insult to master puppeteer Carlo Rimbaldi, and his centuries-old art--part of the power of puppetry is that it can transcend wooden expressions, through delicate gestures and wordless storytelling.

Another effect of enhancement is that ET’s face is more anthropomorphic, less ambiguous--not necessarily a good thing. Spielberg originally meant us to see ET as possibly menacing: the alarming squeals, the fact that we never get a clear glimpse of the creature. The stiffness of ET’s face even up to the final scenes helps retain that ambiguity, no matter how lovable ET becomes for us. By giving us a more expressive puppet (one “improved” through push-button technology), Spielberg short-circuits this strategy and gives us something less stylized, more openly meant to tug heartstrings.

Finally, there’s John Williams’ score--fine enough in the beginning (okay, Bernard Herrmann) and middling in the middle but annoyingly loud towards the end. The restoration does us a favor by cleaning up the print, doesn’t do us a favor by digitally cleaning up the score--it’s still there and louder than ever, all trumpet fanfare and rumbling kettledrums.

Ultimately, one asks, does it matter? I don’t think so. ET has enough good things in it--the magical early sequences, the realistic interplay between kids and adults, the growing friendship between boy and alien--that it survives such mistakes. ET twenty years later manages to retain its power, at least for those captivated during its original commercial run; I can testify that at least in the screening I attended it’s captivating a new generation, one that usually grooves to louder fare like The Phantom Menace. Children, it seems, are still capable of feeling enchantment, awe, wonder; the problem is in finding someone still able to cast such a spell.

Spielberg himself has apparently lost the touch while trying to grow up and create more mature fare like Schindler’s List and Saving Private Ryan (both of which succeed mainly in showing us just how precious was the magic he had lost). Spielberg’s career before and after ET is testament to the truth of the picture’s underlying theme--that magic is still possible, here and now and often defying explanation, and that it can just as mysteriously fade away. 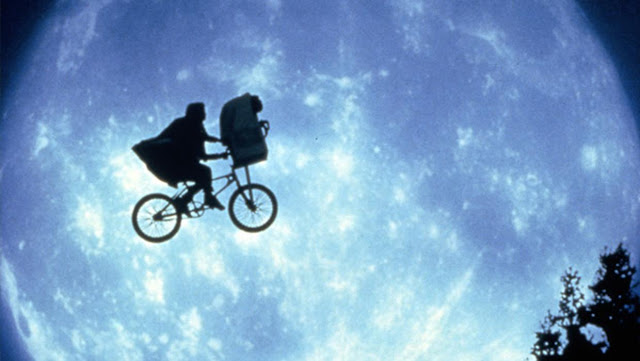