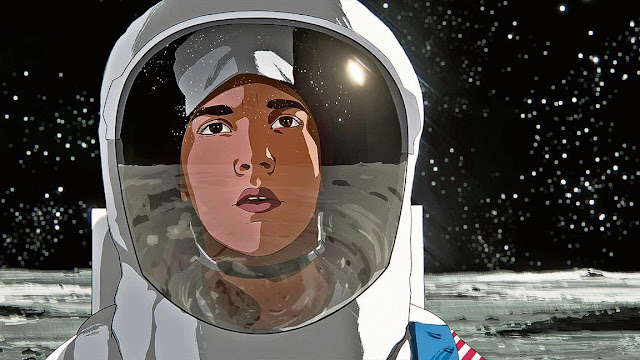 Richard Linklater's Apollo 10 1/2 is the director's take on the moon landing, which for him isn't just a passion project or historic event to dramatize but his childhood, literally. Maybe one of the funnier moments in the film is when Stan (Milo Coy as the youth, Jack Black as the reminiscing adult) cites all the ways the space race has permeated everyday life: not just car dealership discounts ("the closer they get to the moon the lower our prices are!"), but a rocket slide (which were everywhere-- I remember one at Burnham Park in Baguio City that got rustier and rustier year after year), multimilliondollar space epics (Destination Moon on TV, 2001: A Space Odyssey on a really big screen), the nearby Astrodome (complete with Astroturf), and almost daily bombardments of the Apollo program's progress in beating the Soviets to the moon.

The film has a plot, of sorts: Stan has been approached by government agents to participate in an improvised space program where they try out all the equipment meant for Apollo astronauts on him first, because the LM (lunar module to you non-space geeks) had accidentally been built too small for an adult.

Stan accepts the mission-- what kid wouldn't? He never once mentions the possibility (or it never occurs to him) that this is all just a framing device for his half-dreamed, half-witnessed memories of the program, and of life growing up in suburban Huston.

Critics compare the film to everything biographical, from Federico Fellini's Amarcord to Francois Truffaut's The 400 Blows to Linklater's own Boyhood; I see this as more amorphously structured, less a narrative than a biographical essay-- think Chris Marker's San Soleil stripped of a few layers of meaning and of Marker's lyric sense of mystery, served with a generous helping of American humor. From Linklater's early features to the Beyond trilogy to Boyhood, you might say day-in-the-life narratives are his specialty, with their insistence on leisurely pacing and wayward digressions. The Beyond films however have a tension running through them (Will they or won't they? And just in time?); Boyhood has a sort-of structure (glimpse of boy's life every two or three years)-- this picture pushes the formlessness even further, with only the premise (boy recruited by NASA) to give it any narrative shape.

The tone Linklater maintains is intriguing: he has Black narrate in a matter-of-fact manner keeping things light and lively but you sense undercurrents of unease, coming mainly from the TV set. Not the most credible source, perhaps: critics have nicknamed television 'The Idiot Box,' Harlan Ellison labelled it 'The Glass Teat' and called its viewers unweaned children who have trouble distinguishing fantasy from reality.

Ellison has a point, but considering Stan's location-- the outskirts of Huston, at the southern edge of Texas-- the boy may not have many alternatives. What news footage Stan (and we) do glimpse is already disturbing: fighting in Vietnam; campus riots; a black face scowling at the screen, daring you to acknowledge him. Stan's parents are no help-- Mom (Lee Eddy) considers anyone with long hair and bellbottoms a 'hippie;' Dad (Bill Wise) categorizes folks as either 'rednecks' (dropped beer cans to the floor of their cars) or 'white trash' (chucked beer cans out the car window) (Stan's family was neither-- they picked up the cans after the ride to dispose properly in a trash can); Stan's sister Vicky (Natalie L'Amoreaux) is at least aware of the feminist and civil rights movement, but does what little proselytizing she manages to do under her parents' noses. Linklater may or may not be aware of Ellison's collection of criticism but the resulting portrait he offers is of a boy with a narrowly eccentric view of life, with the only window to the outside world already suspect.

Linklater chronicles all this with little sense of judgment. He has Stan describe his existence as facing a bright future, with the possibility of being wiped out at any moment by nuclear war-- interesting contrast to our more agoraphobia-inspiring, less reassuring present (thanks to Putin tho apparently the prospect of nuclear war is back on the table). Times may have seemed simpler, but it's a simplicity created more by denial and ignorance than anything actually streamlined. Linklater acknowledges the illusion, and the fact that most of the family was held in thrall by that illusion, with brief unsettling moments of awareness (television, Vicky's pronouncements and sidelong glances).

One question I find myself asking: would the film feel more substantial if Linklater had explicitly included more '60s angst? Would it feel more disingenuous? Is there room in cinema for a lighthearted take on childhood at the fringes of the counterculture movement?

Depends, I submit, on the execution; Linklater, I further submit, largely validates his intent. The animation-- a mix of rotoscoping and abstracted colors-- has a way of evoking both the Saturday morning cartoons the children wake up early in the morning for, and the family's rosetinted point of view-- lightly satirizing the latter the same time it waxes nostalgic (The light touch helps-- hints that Linklater isn't committed either way). The imagery can be both engagingly colorful and inexplicably beautiful-- as when streamers flutter through the air and you wonder what they are (Party ribbons? Sperm cells? Tentacles from outer space?) before they resolve into drogue chutes dragging the command capsule's main re-entry chutes out into the open.

The fateful moon launch has been depicted in any number of films, from the recent First Man and Apollo 11 to the classic For All Mankind; even in the realm of animation there's Hiroyuki Yamaga's Wings of Honneamise which, being fiction, manages to surround its already dramatic launch with a vicious ground war and aerial assault. Apollo 10 1/2 may not have the grandeur of Wings but does have Stan fading in and out of the broadcast, as he alternately imagines (remembers? dreams of?) Armstrong (himself?) climbing down the ladder to the lunar surface. Mom may dismiss Stan's experience as being an exhausted boy's way of remembering, but Linklater suggests a link between astronaut and youth a la Avatar-- not insistent but he does leave it there for us to take seriously. Or not.

I did enjoy Apollo 10 1/2-- the brief mention of childhood favorite The Time Tunnel was worth the price of admission (well price of a Netflix subscription). May not be my favorite account of the space program or even the funniest (that would be Philip Kauffman's The Right Stuff) but easily my favorite American animated, and favorite of Linklater's recent works.