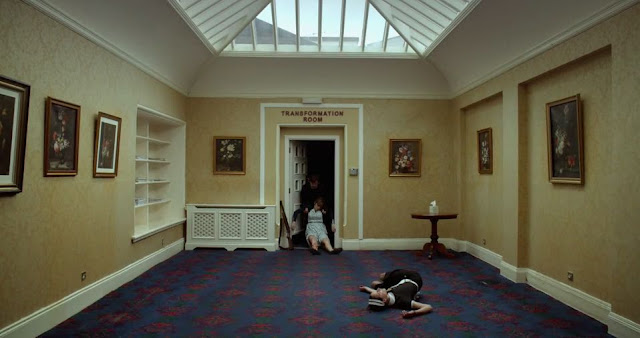 Yorgos Lanthimos' The Lobster is his unique brand of bizarre deadpan humor translated into feature-length English. The premise is imaginative: in a faintly futuristic society single adults or freshly single adults are checked into a resort and given forty-five days to find a suitable mate; if they fail, they're turned into animals, literally, the only upside being they have a choice of which.

"--have you thought of what animal you'd like to be if you end up alone?" the protagonist David (Colin Farrell) is asked.

"Because lobsters live for over one hundred years, are blue-blooded like aristocrats, and stay fertile all their lives."

Good answer, never mind that many end up not so much propagating their race as steamed and served with a boat of melted butter. David knows what he wants in case his priority want--a mate to replace the wife that left him--ultimately fails to happen.

Lanthimos has set his black comedy in a seaside resort, a cross between Basil Fawlty's Torquay inn and the Overlook Hotel--an at first glance perfectly comfortable place (actually the 120-year old Parknasilla Hotel, in County Kerry, Ireland) with more than acceptable accommodations (the guests have every need provided for; when things get dull they are handed tranquilizer guns and organized into hunting parties to cull the bands of renegade singles roving the surrounding forest).

David flees the scene but finds that the renegades' situation isn't much better, despite the plentiful fresh air and enforced outdoor activities: their social structure is designed to avoid physical and emotional intimacy, and kissing is punishable by what's called a ''Red Kiss" (don't ask about that either). Which brings up Lanthimos' second main point--there's not much difference between extremist groups beyond the details; they're all interchangeable, all unbearable.

Bringing us to Lanthimos' third point and big narrative twist: while wandering among the loners and striving to avoid romantic entanglement David falls in love with The Short-Sighted Woman (Rachel Weisz). Man's desires form yet another kind of extremism, with their own perverse rules that demand obedience, never mind the consequences.

Critics expressed disappointment that the director after setting up such a brilliant concept for his film should allow the narrative to settle down into yet another you-and-me-against-the-world love story. I disagree for two reasons: 1) I find David and his girl (as played by Farrell and Weisz) remarkably persuasive, a pair of childlike lovers deadpanning their melancholy way through an uncaring largely malevolent universe, and 2) I consider Lanthimos' moves here as perverse as anything he has ever done, committed this time not against the audience as a whole but specifically against his fans, who likely wanted more of what they enjoyed in Dogtooth. Granted command of an international production and a cast of mostly Hollywood actors (a talented lot, to be honest) one may want to ask: is he selling out with this second storyline, or parodying a unique filmmaker selling out? I say the latter, if only because he plays the role with such conviction (I know how it sounds: "Is he giving a shallow performance or parodying the idea of a shallow performance? I say the latter, because his shallowness has such conviction").

Don't we often demand that artists hold fast to their 'artistic integrity'--but when they do we complain about their lack of flexibility, of growth? Isn't Lanthimos' defecating in the face of expectations something of a retreat but not really surrender, a reason to celebrate as opposed to condemn? So we end up with a surprisingly poignant love story (in my book) instead of yet another twisted black comedy, as folks were hoping--is this such a bad thing?

For the film Lanthimos applies the spare surrealism of Dogtooth to the lush precipitously coastal landscapes that ring Kenmare Bay. We don't see much of the head-on Wes Anderson-style diorama shots Lanthimos is so fond of, but we do get a sense of the everyday underpinning the bizarre, in this film's case a beautiful resort town swarming with unexplained creatures: donkeys, rabbits, fish, ponies, cats, dogs (by far the most common, being the failed guests' most popular choice), pigs, peacocks, at one point even a camel. Yes, The Lobster is worth seeing, if only for the sight of a camel grazing along a semi-civilized Irish coast. 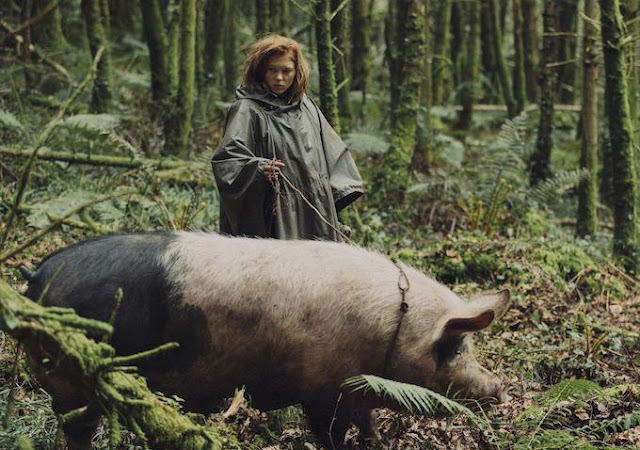