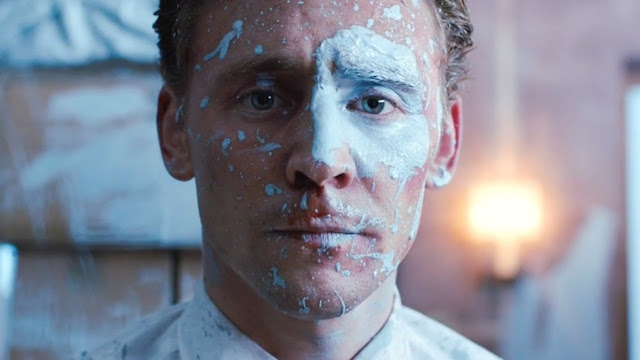 Ben Wheatley's version of J.G. Ballard's 1975 novel is I suppose as good an effort as any to bring to the big screen an in my opinion unadaptable untranslatable writer.

Ballard's books are motionless motiveless endlessly detailed dioramas--massive fishtanks if you like built around an often apocalyptic premise (the world reduced to rubble by wind, the world sunk in water by flood, the world crystallizing due to the leaking away of time and resulting supersaturation of matter). The protagonists (human mannequins, really, with barely any capacity to interact with each other) don't struggle to survive so much as struggle to record the intricate unfolding planet around them.

The novels of his second period (of which High-Rise was one) shifted focus from the bizarre environments surrounding his protagonists to the bizarre behavior of his protagonists as they are respond to their surrounding everyday environment. Crash follows a band of obsessives sexually aroused by car crashes and car-crash wounds; Concrete Island focuses on a man stranded on a highway island who finds himself increasingly reluctant to leave; High-Rise presents the tenants in an ultramodern apartment as they turn their attention from outside world to the building's inner bowels deteriorating into a barbaric state of innocence.

And that's it really. There's no tension, precious little forward motion, minimal characterization (mostly subconscious forces manifesting themselves as either bizarre environment or bizarre behavior) and at most a cursory attempt at realism (Why don't the tenants just leave? Because!). Ballard can't write dialogue; his 'people' speak in a heavily expository stilted syntax (as befits mannequins with cheap software). Towards the end of his novels the dialogue drops away to almost nothing as the 'protagonist' (such as he is) is at this point often powerless to do anything but wander about, peering into dark corners. What holds it all together keeps it compelling drives it forward is Ballard's hypnotic pellucid prose. Each novel is like a prophetic nightmare vision we receive intravenously, from the pulped-wood pages to the capillaries of our fingertips.

And that's why even considering a screen adaptation is either a ridiculous notion or a hopeless cause. Ballard's works are barely novels--more extended prose poems meditating surreal apocalyptic landscapes.

O maybe Cronenberg, if we're talking a conventional narrative feature film--anonymous ultramodern urban environments are the filmmaker's regular habitat, psychology manifesting as either bizarre environments or bizarre behavior his specialty (hence his screen adaptation of Crash, arguably one of the better efforts so far).

Director Ben Wheatley tries. He doesn't quite capture the anonymity of the novel's apartment complex--the building rears out of the ground with triangular snout facing the sun, a Lego model of one of Frank Herbert's giant sandworms; the 15th floor supermarket stuns casual observers with endless rows of color-coordinated rectangular containers and spherical fruits; the swimming pool shimmers like a brilliant emerald pane. It's an altogether too striking and vivid an environment the tenants enjoy, at least at first--but this is Ballard Wheatley is adapting, after all; if he can't use the writer's prose to hold on to his audience, if he's left with dialogue and what Ballard has in the way of human figures, he might as well deploy lights shapes colors (sound music), about the only instruments left to him.

He does best when he relies on his camera--rising, gliding, pushing close, pulling away--and some of his slyest shots capture a hint (if not full flavor) of Ballard's wit (the camera following a row of fruits from bright red to moldy gray; the camera peering at a supermarket checkout conveyor as individual items are loaded and slide rightways like so many objets d'art). And while I may argue that Wheatley does best when dropping the text and going on his own, his most effective shot does come straight out of the book: Dr. Robert Laing (Tom Hiddleston) spit-roasting a dog leg, taking a nibble to see if it's done.*

*(My only issue with the image is more culinary than cinematic: dog meat should properly be stewed, to counteract the gaminess)

Scriptwriter Amy Jump and a cast of talented actors do tinker with aforementioned plot and characters, presumably hoping to jump-start something: building architect Anthony Royal makes an earlier appearance than in the novel, to take advantage of Jeremy Irons' droll delivery; Luke Evans' documentary filmmaker and relentless rebel Wilder (appropriate name considering his role) provides the film some unruly alpha-male energy (he's also given a more explicit motive to confront Royal in the film's climax); Sienna Miller as the sensual Charlotte, Elizabeth Moss as warm earthy Helen function mainly as ornaments, but in Ballard's novels human beings are ornamental--if not replaceable interchangeable disposable--anyway.

As Dr. Laing, Hiddleston is the perfect Ballard protagonist: handsome and intelligent, opaque with the suggestion of inward neurosis, all the layers mashed together by an epic sense of propriety (James Spader in Crash was almost everything Hiddleston is, save for that sense of propriety). If you want to check his emotional temperature at any moment you need only look at the edges, where trickles of thought and feeling (half-smothered gestures, fleeting microexpressions) might have leaked.

Wheatley trims the extremities of Ballard's vision (skip the rest of this paragraph if you haven't seen the film!)--the tenants don't regress completely into subhuman thought and behavior, the swimming pool hasn't been emptied to expose piled-high corpses (a not unfamiliar sight to Ballard, who spent his youth in a World War 2 Japanese internment camp), and Wilder's death is viewed through kaleidoscope lenses (a gimmicky mistake, I thought).

As a Wheatley film it's flagrantly exhilaratingly ambitious; as an example of dystopian science fiction it's intriguing; as an adaptation of Ballard compromised by commercial considerations--necessarily so, as Ballard is anything but audience-friendly--it's passable.

Is it possible to adapt Ballard on his terms? I can think of two examples and oddly they're both Asian: Tsai Ming Liang's The Hole (man and woman struggling to survive in abandoned residential building in postapocalyptic Taiwan) is a mix of High-Rise and Kafka and Dennis Potter, with Liang's cheeky absurdism a perfectly acceptable substitute for Ballard's deadpan surrealism; Mamoru Oshii's The Sky Crawlers succeeds where Steven Spielberg's terminally wholesome Empire of the Sun fails, presenting dislocated characters flying against a brilliant blue sky (nothing like a blue sky as background for surreal imagery). Is it possible? Not directly I suspect, and not with hope of financial returns. 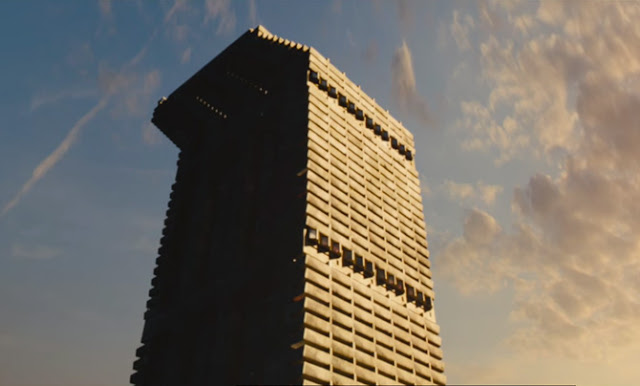