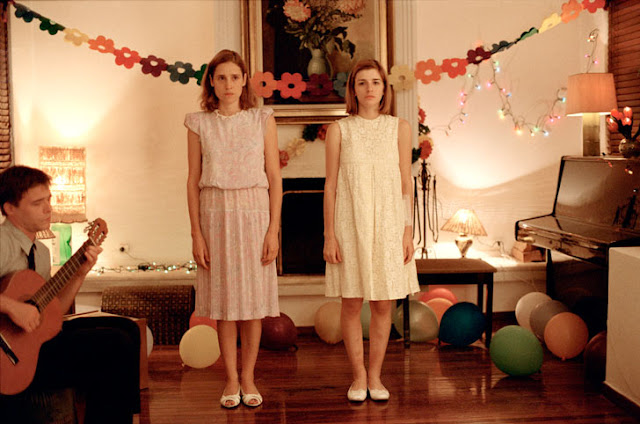 And while we're at it my preferred version of what Room was trying to do:

Yorgos Lanthimos' Dogtooth starts off in possibly the only way it can possibly start: with a father coming home.

About the quietest, most quotidian beginning to a film that you can imagine, and that's on purpose. Father coming home, the house he comes home to large, with an expansive garden complete with pool and a high fence surrounding the property, but otherwise--nothing remarkable.


Maybe the first indication that all is not what it should be is when we hear a tape recorder playing vocabulary words in the background, the words being explained totally nonsensical: "A motorway is a very strong wind; 'sea' is a leather armchair with wooden arms; a carbine is a beautiful white bird." Later, straight out of nowhere, a young girl asks the mother what a "zombie" is and the mother, without batting an eye, tells her it's a "small, yellow flower."

Strange, but stranger yet is the way Lanthimos allows the full situation to seep into our brains, like an IV drip hooked to a bottle containing hallucinogens. That house and grounds, so spacious at first impression, gradually begins to collapse when we realize that it's the family's whole world, and only the father dares brave the unknown outside. He's their processor, their procurer, their protector, and their punisher, in ascending order of significance. Among other things, he warns them of the dangers stalking the house perimeter, such as the fearsome, vicious, deadly creature known as the "cat."

Perhaps the strangest element in the film is the camerawork (by Thimios Bakatakis)--critics have noted how odd the compositions are, often off-center with heads or limbs lopped off, the lighting either diffused and low key, or bright outdoor sunlight. Oddest of the odd are perhaps the group compositions (see above)--they seem flattened, the people in them carefully posed as if Lanthimos were trying to evoke an old-fashioned family portrait. I've heard the film being likened to the works of Ulrich Seidl, Michael Haneke (without the moralizing) and a more domesticated Stanley Kubrick, but the style and subject matter I'm actually reminded of is Terence Davies' Distant Voices, Still Lives (2008)--the same group arrangement with flattened perspective, the same tyrannical father and rebellious children, the (most striking similarity of all) same sense of airless stillness, of claustrophobia, as if the family had been captured and put in a display jar, to fester and seethe in their own virulent emotions. Some marked differences too--Davies' film is steeped in nostalgia and melancholy regret; it's rich in emotion and a sense of community, of belonging; Lanthimos' film is like ants caught under glass, a colder, more sardonic picture with precise edges.

As for Lanthimos' motives--I've heard people speculate, (it would be ridiculous not to, the symbols are so obvious), I've heard people refuse to speculate (it would be futile, the symbols are so confused). It's obviously a satire on family, on the way a father can oppress his family (perhaps the great film on the subject is Mike De Leon's more harrowing (because it's so real, so personally urgent to the filmmaker) Kisapmata (Blink of an Eye, 1981)); it's also possibly a metaphor for how a totalitarian state can leave its subjects so helpless, their view of reality hopelessly warped (North Korea, anyone?).

It's also possibly a metaphor for the difficulty of ever truly knowing the world outside, or even the world outside your immediate circle. Here I'm thinking of Plato's cave, how we're fearful savages peering at flickering shadows, trying to guess at the shape and temperament of the creatures waiting outside. Looking at matters this way perhaps Dogtooth isn't as introverted a film as we'd like to think, its premise not as doggedly irrelevant. Terrific work, and it's amazing the Oscar voters decided to include it as one of five Oscar-worthy foreign films--it's edgier and more out-there than the usual pap nominated.
.
at 11:42 AM