Walt Disney Studios in case you haven't noticed has been remaking its movies with mostly dire results. There was the live-action The Jungle Book (which digitally rendered India a uniform gruel gray); the live-action Malificent (which totally bypassed the splendor of the original--possibly the only Disney animated feature I really liked--in favor of a puny little girl-power parable) and I hear that Kenneth Brannagh did a live-action Cinderella (which I missed, thankfully; there's only so much punishment a critic can take).

The 1977 Pete's Dragon wasn't exactly a Disney classic come to life--it's not as funny as Jungle Book, does not feature cute rats like Cinderella, does not frighten you with a ten story high walking nightmare clad in clashing nightblack armor, bristling sable steel pikes a la Sleeping Beauty. There's room for improvement in the original, an entire apartment building's worth, tantalizingly promised by the opening sequence--man woman and child driving through forest road, reading a children's book (Elliot Gets Lost) and discussing adventure. "That's the other thing about adventures," declares Pete's dad; "you got to be brave." At which point of course the deer hits the fan.

It's a scary sequence straight out of Carroll Ballard's Fly Away Home, re-enacted in slowed-down motion by Jennifer Kent for The Babadook: the world from a child's point of view suddenly flips and spirals out of control, ending in water, in a ditch, in an unknown forest. It's the stuff of nightmares, and the sense that it's not really happening--that the sound of imploding metal is somehow deadened, or that fear and hysteria shriek not directly into but some distance from your ear--paradoxically seems to make the event feel all the more real. You're sometimes not quite all there in an accident; you sometimes feel the damage afterwards, when the pain from torn skin and broken bone starts to register.

Except director David Lowery (Ain't Them Bodies Saints) doesn't trust the power of his opening scenario--amped up a notch by the threat of nearby wolves--and quickly introduces Elliott, a big green dragon with slightly goofy face who drives away the big bads. "Are you going to eat me?" Pete asks the creature, the answer to which perfectly reasonable question might and should become a major issue--but with his lantern eyes and sad smile who can imagine him eating anything bigger than a carrot? He's all adorable thick green fur, a digitally rendered oversized stuffed animal ready to hop up on the shelves of Toys 'R Us stores to be sold to millions of children worldwide.

That's pretty much the vibe I get from this picture--a wannabe Grimm fairy tale with the grimmer implications sanded away and polished. We are so scared of scaring our kids; we don't want to traumatize them, or hurt their feelings, or in any way cause them discomfort with stories that involve actual emotional stakes (as for all that talk about 'trigger' warnings--figure the MPAA (or its equivalent in the Philippines, the MTRCB) ratings system should be warning enough, maybe too much warning; I'm of the probably culturally insensitive belief that if you don't want to feel intensely you should confine your viewing to the Disney Channel).

There's a story of sorts. Pete (Oakes Fegley as a boy) is living the hippie dream of a natural life with his furry giant lizard (that's another problem I have--dragons are often referred to on film and in literature as coldblooded reptiles (or on occasion 'wyrms'); since when did reptiles sprout fur?). Pete's found by Grace (Bryce Dallas Howard) who immediately wants to take him in--amazing how quickly the welfare of one lost child becomes the whole town's priority; if Tarzan or Mowgli had received this much attention when found would they bother staying in the jungle?

Karl Urban plays Gavin, who wants to catch the dragon (for what  exact reason we never learn, though I suggest stuffing the creature with palongpong--a Cordillera vine--or unripe mangoes, then spit-roasting the carcass over coals), but he isn't allowed to do a lot of villainy, much less catch the creature; Oona Laurence plays Natalie, Grace's stepdaughter and Pete's self-appointed companion--with a little tinkering she could have made a fine foil, provided the necessary squeeze of lime to counteract all that syrupy sweetness (doesn't happen alas). Fegley plays Pete as a blank space on the big screen.

Which leaves us the dragon, pretty much the whole point of the exercise. I'm the first to admit I have very particular notions on how a dragon should look and act and sound. In Ursula K. Le Guin's Earthsea books they're ancient and wise and cruel and terrible; in Sleeping Beauty same, with not a little sexual charge (she used to be a beautiful evil queen after all). Dragonslayer's Vermithrax Pejorative (awe-inspiring name!) is mute and old (400 years) and possessed of a terrible charisma. The Hobbit's Smaug comes closest to fulfilling the classic definition onscreen, but alas Peter Jackson must have felt inadequate to the task and unlike director Matthew Robbins took the easy (read: digital) way out. Pete's dragon with its sickly pallor and goofy face and indeterminate green fuzz feels like an affront to all those magnificent creatures, less a figment of his imagination than a figment of his indigestion. Avoid like the plague, folks. 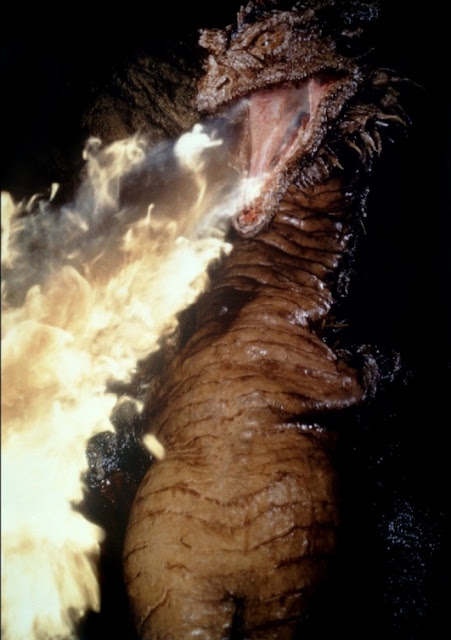