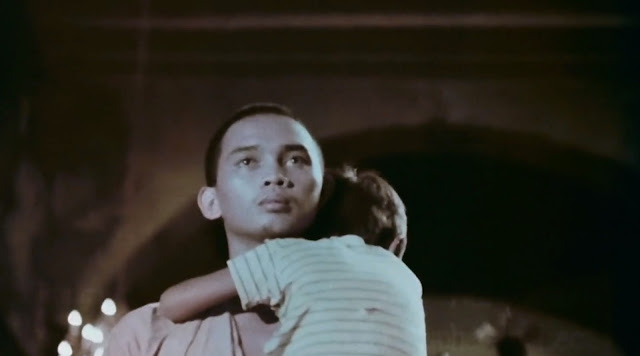 (Thanks to Video 48 for some of the pictures)

This can be neither comprehensive nor complete. We've lost so many of our films to vinegar syndrome, to New Year celebrations, to general apathy and neglect; a kind of accelerating cultural Alzheimer's, a tragedy I would argue comparable to many recent disasters only instead of lives lost we're losing our sense of self. This is a mere sample a sketch--a glimpse if you like--of what I believe are the finest Filipino films I've managed to see to date.

A film is composed of many elements--dialogue, sound, music, color, movement, the shape and texture of people's hands eyes faces. Of all these elements I'd say the most expressive are the last three--but that's me saying so, an assertion just dying to be contradicted (ask Michael Powell, or Robert Bresson).

And a list (any man's list, which I consider superior to any aggregate) is ultimately futile, is a man's way of insisting on his priorities biases (occasionally hopefully) insights.

This for better or worse is mine. 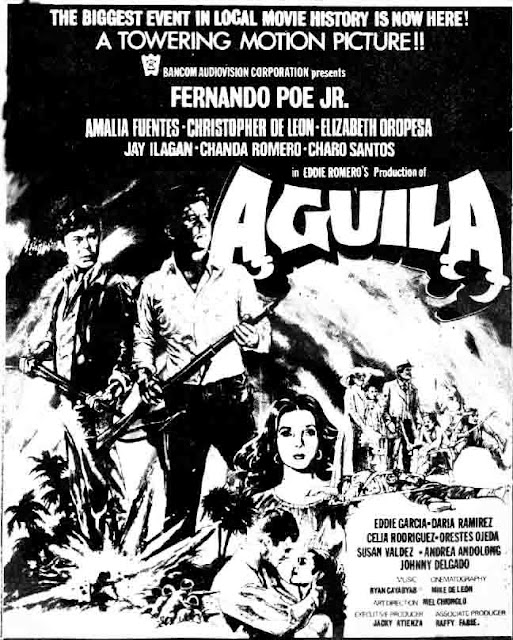 Eddie Romero may be known best for his beautifully written picaresque epic Ganito Kami Noon, Paano Kayo Ngayon? (The Way We Were, The Way We Are) but I prefer this: history (from turn-of-the-century Philippines through the Second World War to the recent 1970s) as seen through the eyes of a thoughtful adventurer (the inimitable Fernando Poe, Jr.) and the understated yet brilliant lens of cinematographer Mike De Leon (a major filmmaker in his own right). The film is arguably Romero's The Godfather, showcasing the generational passage of time better than any other Filipino film I know. 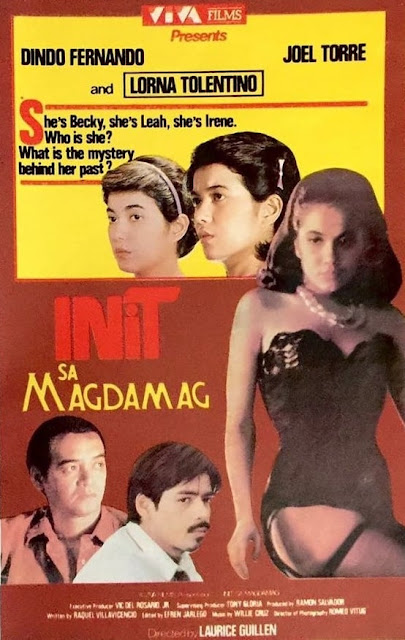 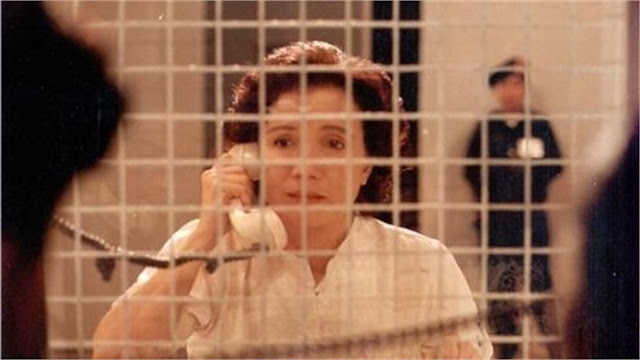 Narrative filmmaker Tikoy Aguiluz wielding Pete Lacaba's script tells the true story of Flor Contemplacion, the housemaid accused of murder in Singapore, same time documentary filmmaker Tikoy Aguiluz (reportedly taking his cue from Monty Python's And Now For Something Completely Different) tells a larger story, of the Great Diaspora that flung Filipinos to the far corners of the Earth, and of our collective shock at the apparent injustice of her execution. With Helen Gamboa giving a great performance as Flor, and Irma Adlawan as a luminous Virginia Parumog. 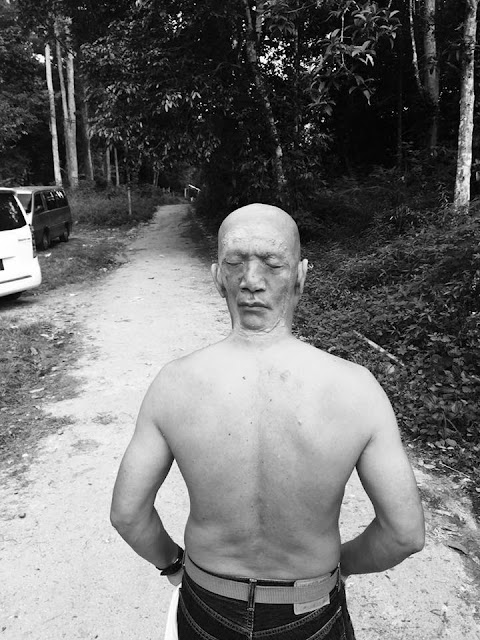 Lav Diaz's take on the Philippines then and now, conflating Marcos and Duterte in a single freakish figure, a gibbering incoherent idiot full of sound and fury. It's a musical without music, an entertainment with precious little entertainment value, a narrative film with few of the tropes to help the bitter medicine go down--a cry of anger so pared away and pure it burns onscreen for four steady hours. 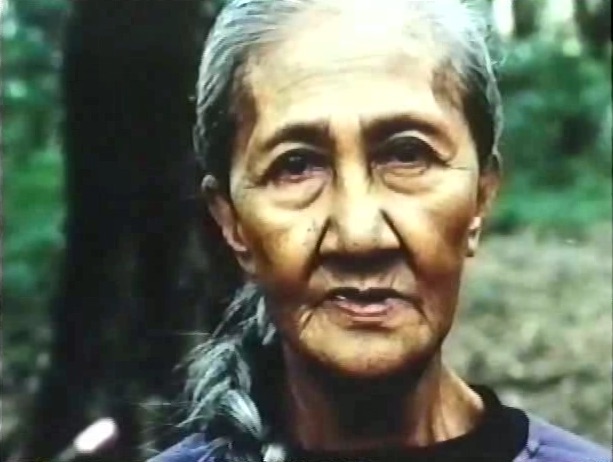 
Mario O'Hara's extremely low-budget (a mere 3 million pesos, or roughly $65,000) film takes a page from Jean-Luc Godard, Gabriel Garcia Marquez, and Amado V. Hernandez (among others) to capture in its wide-ranging, free-wheeling, all-too-brief (100 minute) running time the terrors triumphs tragedies of the Philippines during the tumultuous post-Marcos era. 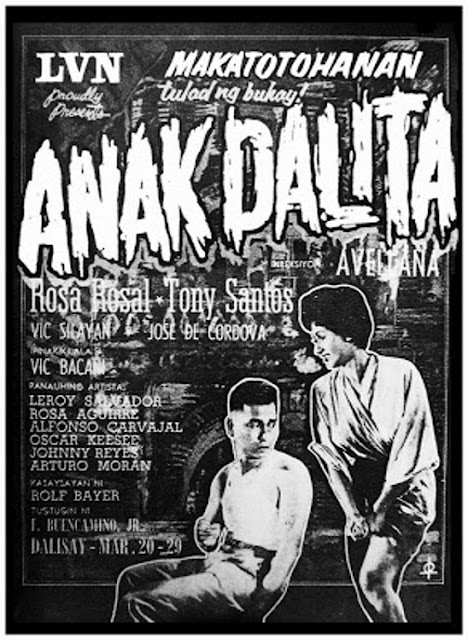 Lamberto Avellana is the master of the visual metaphor--the ruined church that serves as the film's setting and the squatter community's temporary shelter is a symbol if you like of the persistent resourcefulness of the Filipino, of the way he can take humble material--a damaged religious icon, a damaged Korean War veteran--and repurpose them to a higher (or more corrupt) calling. Arguably Avellana's most noirish work, with neorealist cinematography by the great Mike Accion. 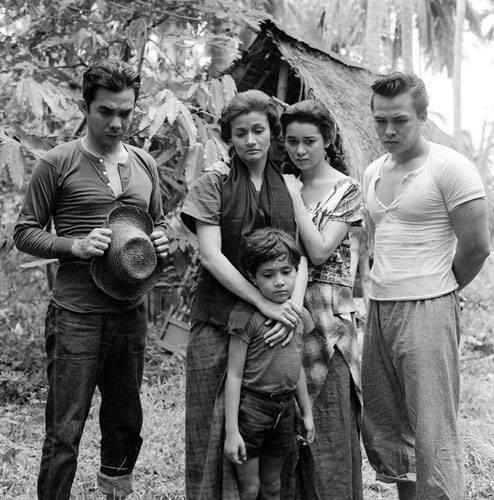 Rosa Rosal and Tony Santos again in a struggle for survival, this time in the gorgeous Philippine countryside, under direction of Manuel Silos. The film has the understated empathy of Renoir the epic lyricism of Dozhenko--with Silos' baskets, brimming to overflowing with luscious lanzones, replacing Dozhenko's giant pears. 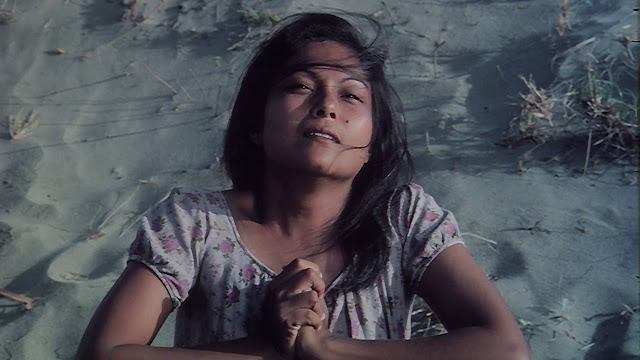 Ishmael Bernal's most visually striking most hallucinatory film (cinematography by Bernal's favorite cameraman Sergio Lobo) the wasted landscape (actually the sandy dunes of Laoag) looking forward to the devastation wreaked by the 1991 Pinatubo eruption. One of the few Filipino films to dare condemn religious institutions for their hypocrisies one of the even fewer to insist on the primacy of the human--as opposed to divine--spirit. 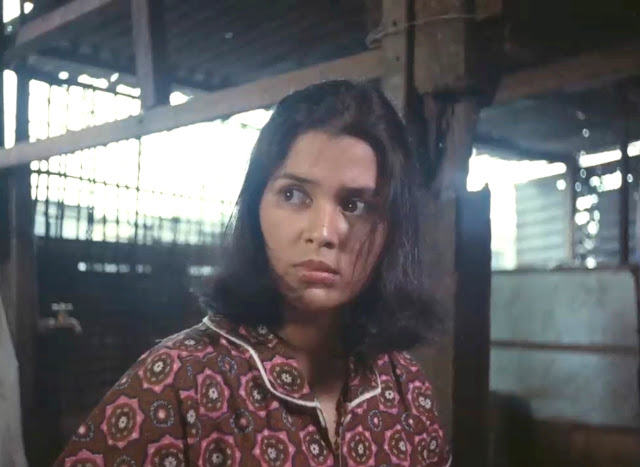 Lino Brocka's slum melodrama (based on Mario O'Hara's teleplay, with unforgettably squalid cinematography from the late great Conrado Baltazar) is a tight-knitted three-way: mother, daughter, mother's lover, caught in an endless carousel whirl of lust jealousy revenge that recalls in its compact intensity Shakespeare's Othello, only filthier (set in the squatter shanties of Tondo, with a crucial scene shot on the slopes of Smoky Mountain--literally, a mountain of garbage).

(Available at The Criterion Collection) 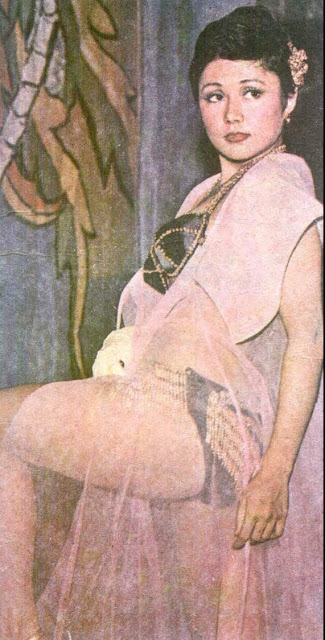 Celso Ad Castillo's film about an innocent lass turned burlesque dancer is less about narrative coherence (why is Joonnee Gamboa's impresario--a great performance, by the way--in this picture, and what, exactly, is he saying?) than it is about visual poetry (the deflowering scene is a montage haiku of associative imagery). A masterpiece from what fellow filmmaker Mario O'Hara once called “the finest eye in Philippine Cinema." 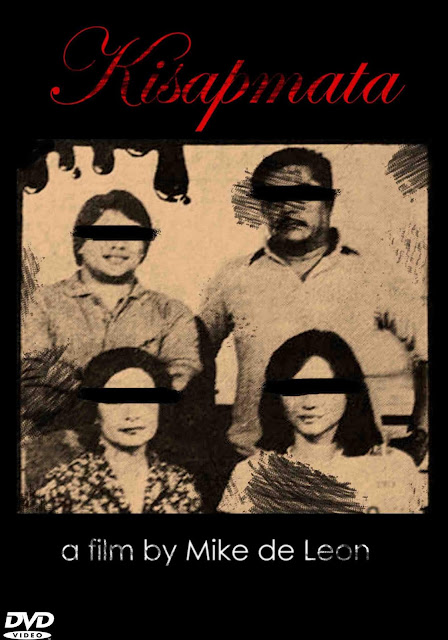 5. Kisapmata (Blink of an Eye)

Mike de Leon's film adaptation of the Nick Joaquin true-life crime story “The House on Zapote Street” takes elements from Stanley Kubrick's The Shining and (some say) his own life, in my opinion improving on its inspirations in terms of comic claustrophobic horror. Easily his most intense most hilarious most personal work--and arguably the most perfect Filipino film ever made. 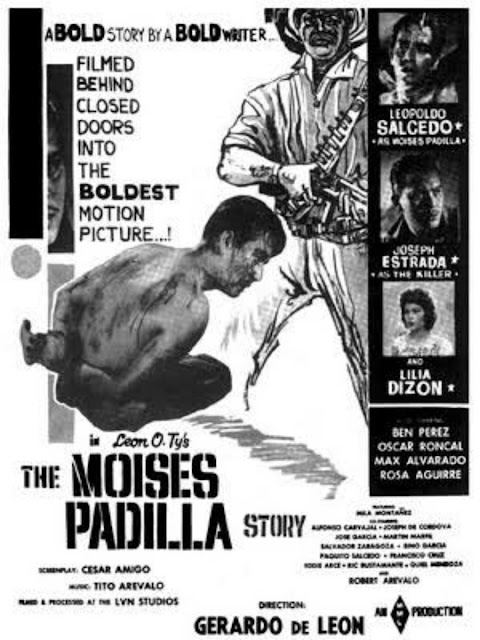 In mostly Roman Catholic Philippines, this is Gerardo de Leon's Passion Play, a political tract that transcends propaganda intentions to become a great character study of the film's eponymous figure (Leopoldo Salcedo at his most heroic) and of the man who betrays him (former president Joseph Estrada in the performance of his career)--the latter so compellingly tormented you're unsure who is suffering more, the Christ figure or his reluctant Judas. 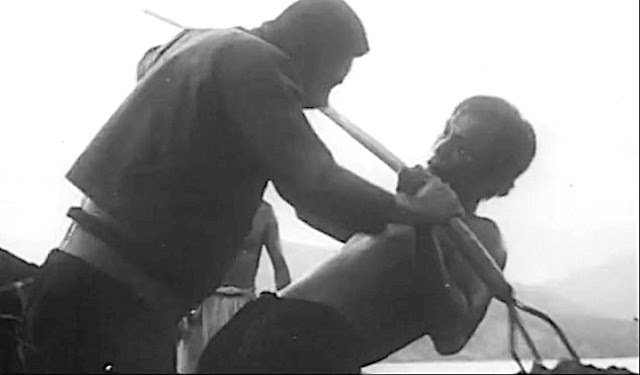 A fairy tale if you like, of people from an exotic culture set in a harshly beautiful desert landscape--for what landscape is harsher or more beautiful than the sea? The first shot of Lamberto Avellana's masterpiece (cinematography again by Mike Accion) sums up the film: the tension between sand and surf, between man and woman, between people of differing loyalties communities ethnicities. As expressive a metaphor for a man caught between two opposing forces as you can find. 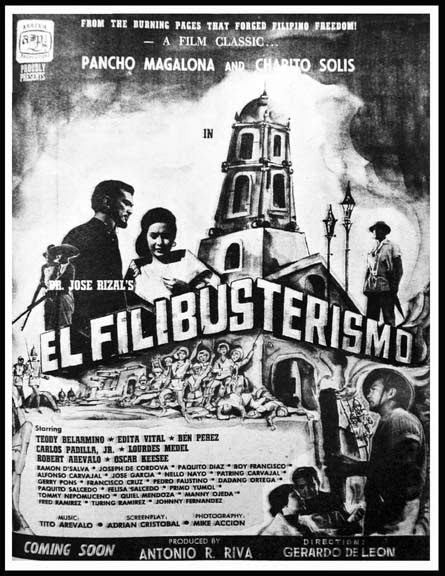 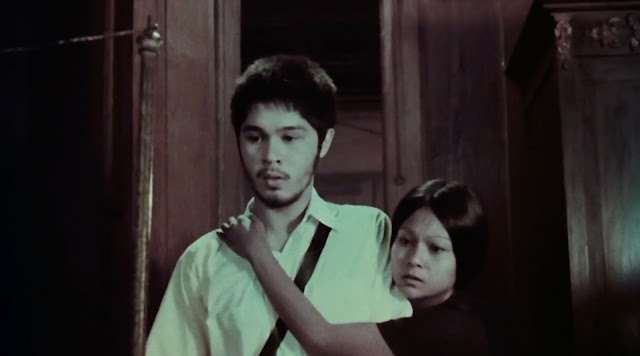 Mario O'Hara's masterwork (lush jungle cinematography by Conrado Baltazar, period-accurate production design by the great Vicente Bonus) has the rare empathy to understand the wartime Japanese at their worse (and later best), the wartime Filipinos at their best (and--later--worst). Visually and emotionally, the finest Filipino film ever made.

thanks for the list.. am so glad i have watched six of these.. sometimes, we find movie gems in rickety provincial moviehouses, where i saw tatlong taong walang diyos - top in your list..