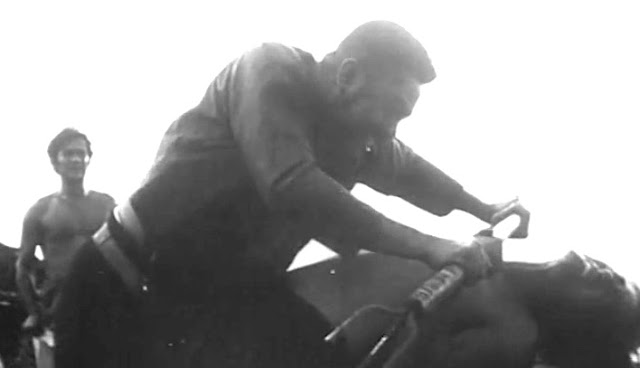 Yet another of Lamberto Avellana's LVN films

The film starts with an image of waves lapping onto shore, the divide between land and sea stretching diagonally across the screen. With the first frame Avellana (collaborating with the great cinematographer Mike Accion) sums up the film: the tension between sand and surf, between people of differing loyalties, communities, ethnicities. A man standing beside a roof of dried palm raises his horn against clouded sky and blows; cue the bombast (and lovely lilting melody) of Francisco Buencamino Jr.'s theme music.

Avellana cuts to a series of shots, of thatched roofs gliding endlessly past a tight camera frame. As the shots grow wider we eventually see that the roofs sit on large canoes, the canoes collecting to form a temporary floating village. The progression serve a purpose I think: to introduce what feels at first like immense wood-and-leaf constructs only to learn that they're really fragile little huts against the vast implacable sea--to in effect see the Badjao's majesty through his own eyes then pull back and realize his actual much humbler circumstances.

Avellana seizes attention right off: the tribe gathers round their Badjao chief (Pedro Faustino) as he holds a baby (umbilical cord fresh-cut) up high. "If it survives it's worthy to be a Badjao" the chief declares. "If it doesn't then the father has lost nothing," and tosses the babe into the sea. Barbarous and shocking yes (though infants do have protective reflexes) but in its own way the ritual has a harsh grandeur: these people being constantly immersed in the sea constantly threatened with watery death are reminded (the child above all) that life is not cheap but thrillingly precious, especially when in danger of being doused.

The chief's son Hassan (Tony Santos) is harassed by the Tausug warrior Jikiri (Vic Silayan Jr.); Hassan and his fellow Badjao travel en masse to the Tausug village to air their grievance, and again we see Avellana unfolding this world still wider: as the Badjao anchor their boats we see huts on raised platforms standing to either side, a high bamboo bridge stretching across, a pedestrian casually crossing that bridge. Hassan's brother Asid (Leroy Salvador) passes a store, looking curiously at some dried fish and a pineapple; the storekeeper, annoyed, waves him away--a little mime vignette sketching the Badjao's rootless reputation.

The Badjao stand in front of Datu Tahil's (Joseph de Cordova) residence--two stories high, and the most palatial structure we've seen so far. "You approach us with your weapons" Tahil notes. "Our prongs stand for our life," the Badjao chief replies--they are the work tools that help the sea folk catch their food. Tahil haughtily reassures the Badjao of their rights, though the real action is in the sidelines: Hassan has caught sight of Tahil's niece Bala Amai (Rosa Rosal), a regal swannecked princess stepping out from a back room, and is awestruck. He wants her for his wife.

The bulk of the film outlines the increasingly dear price Hassan pays for Bala. Along the way we not only learn the social dynamics between tribes (Bala in marrying Hassan lowers her social status; Hassan in staying with Bala surrenders his Badjao identity) we learn of the essential humanity of the two lovers. Tony Santos' Hassan has an appealing sense of pride--not ostentatious but rock solid; tactful and modest but willing to speak up for himself when necessary, stake his life in defense of his honor. If he gives up much of that pride for Bala's sake--to become Tausug, ostensibly a step up in ranking, though Avellana through Hassan makes us feel it's really a step down--that's not so much a mark of weak pride as it is a mark of great love. Later when his status as newly adopted Tausug is jeopardized Hassan seems lost--he has no precedent to guide his actions, and he must draw from what he knows about the Badjao and the Tausug to (with crucial support from Bala) forge his own path, somehow satisfy his dented but still defiant sense of honor. 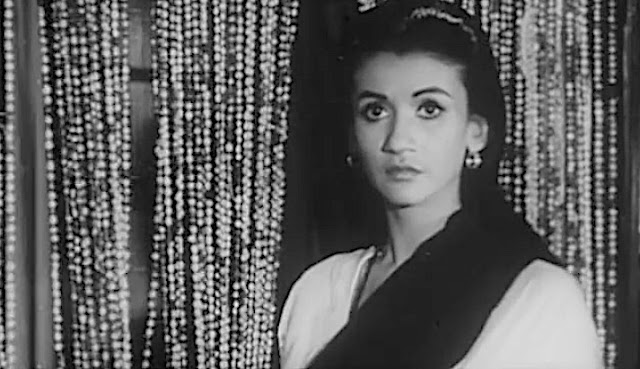 Rosa Rosal's Bala is a more subdued creation. She comes off at first as a breathtakingly exotic creature, more prize to be won than equal partner in a relationship; when Hassan marries her she makes demands (they should stay with the Tausugs, etc), presumably what she believes is the cost Hassan must shoulder in marrying above his station. She later proves her loyalty to Hassan by deftly speaking up for him to Datu Tahil, when grateful obligation has forced Hassan to stay silent; later she remains by his side even when they have in effect lost everything. Rosal's role here as trophy turned true wife is a graceful performance, full of subtle shadings and gentle transitions.

As Datu Tahil, Joseph de Cordova makes a fine foil to Santos' Hassan. Surrounded by a palatial home and fierce warriors (including the volatile Jikiri) he swaggers like a black-and-white Yul Brynner; in more intimate negotiations he reveals a winning charm and understated humor, the mark of an experienced leader and diplomat. If he suffers from the flaw of avarice it's initially a mere taint, suggested at first by his interest in Hassan's beautiful blue pearls, later fanned in intensity by the arrival of pearl trader Ismail (Oscar Keesee), who plays Tahil as skillfully as Tahil plays everyone else.

Avellana here (as in Huk sa Bagong Pamumuhay) is again not as showy a filmmaker as Gerardo de Leon but when he must is perfectly capable of stepping up, the contrast between understated medium-shot exposition (born I suspect from a theatrical heritage that focuses on performance above all) and clean coherent action filmmaking being all the more startling (Mike de Leon: "in my book he's a better storyteller"). The duel between Hassan and Jikiri starts with a jawdropper, Jikiri looking resigned in the face of Hassan's resistance then suddenly swinging his kris (blade forged in a sinuous wave to better bite into flesh) high overhead, to be caught midair by Hassan's tiny pronged fish spear (if you think that's easy, try it--watch your fingers). Avellana shoots literally from the hip, waist-high camera emphasizing Silayan's heavier bulk as it repeatedly bears down on Santos' leaner figure; the fight ends in a struggle beside a rock pool--again evoking the film's divided nature, caught between land and sea.

As for the finale (skip this paragraph if you plan to see the film!) I'd mentioned before how Hassan is lost twice over--first to the Badjao later to the Tausugs. When he returns to his own tribe they are suspicious--why should they accept him, after his betrayal? Hassan's response comes straight out of the very heart of Badjao tradition (though with a decidedly unorthodox twist), is in fact carefully prepared for by Avellana in his opening sequence. Hassan shows that he is willing to pay for the thing he most wants--acceptance back into the tribe--with the thing he most values, an all-or-nothing gambit (literally that; if Hassan failed I can't see Bala staying long by his side). Who can resist such a grand gesture? Not the Badjao, apparently; certainly not me.

What more to say? Arguably Avellana's masterpiece, and arguably one of the greatest Filipino films ever made. 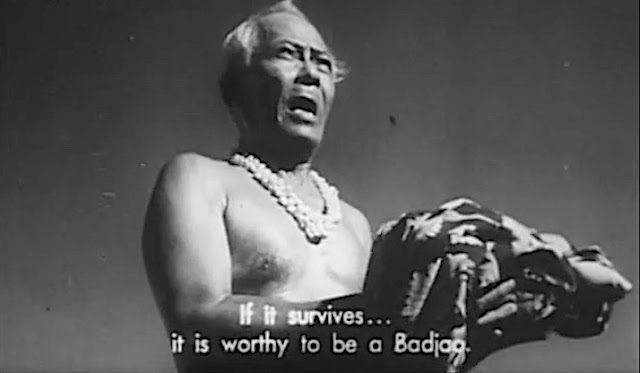