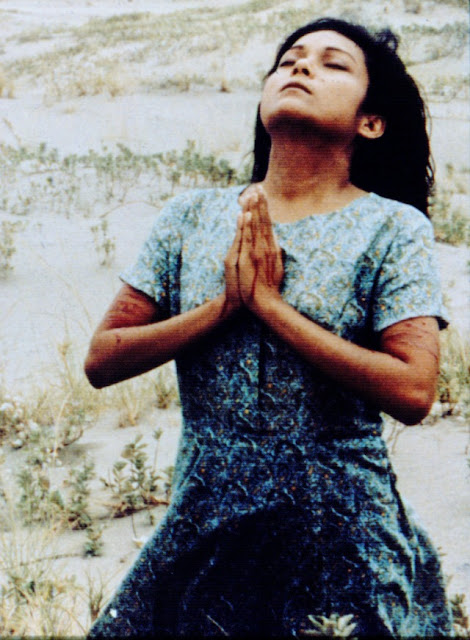 During the IndioBravo Filipino Film Festival (June 11-14, 2009) I introduced Ishmael Bernal's Himala (Miracle, 1982), about a village girl who finds she can do miracles, and the cult and industry that sprouts around her. I noted that the picture wasn't particularly well-liked by the Manunuri ng Pelikulang Pilipino (Critics of Philippine Cinema--the country's most prestigious critic's group), that it's an easy target because of its rather stale canonical status ("It's been considered a classic since forever!") but that actually watching the film through unbiased (or as unbiased as one can be) eyes, one might realize that this was Bernal's most visually daring film--an almost prescient picture that predicts the desolated look and feel of Central Luzon after the eruption of Mt. Pinatubo in the early '90s.
And it was prescient, in more ways than one--at one point the film's protagonist Elsa (played by Nora Aunor), says that as a child she had always wanted to be the Philippines' first woman president (which we eventually got, two of them); at another point I noticed how uncannily the film in many ways mimics the career of its famous star; the town's fortunes rise and fall, rise and fall, much like Aunor's own.

In many ways the script felt pretentious, mock-poetic. When Gigi Duenas' prostitute talks about the wind carrying the prayers of the townspeople up the hill to where she was sitting, I thought: "She's not a hooker, she's a hippie" (which, in fact, she was; Bernal will at times willfully ignore or set aside realism for a specific effect). But the alien quality of the locale--barren landscapes rarely if ever seen in the Philippines (the film was shot in Laoag, in Northern Luzon)--is a memorable metaphor for the barrenness of peoples' souls, and if Aunor's Elsa seems less than adequately sketched out (I believe Bernal conceived of her as the enigma at the heart of the film), the people surrounding her--the aforementioned prostitute (a Magdalen figure, of course), the religious fanatic (Luara Centeno, one of my favorite performances in the picture), the passive yet troubled documentary filmmaker (Spanky Manikan, standing in for the director's consciousness and conscience) have been delineated with admirable skill. If Elsa herself remains stubbornly opaque, her effect on others is refracted through others.

The crowd scenes have been oft mentioned, but I feel the need to mention it yet again--it's almost a principal character, this evolving, pulsating, ululating, many-limbed creature that pulls and tears and tramples everything around it; its character evolves constantly, from the orderly masses that wait outside Elsa's house to the panicked mob that swarms like startled ants over the little sand hill where Elsa has her visions to--most alarming of all--the praying faithful crossing the sand on bare knees, sending their petitions heavenwards in an act of futile desperation. This is Bernal's film on faith and religion, and in many ways he flubs his message; in many ways the film is larger than said message. He set out to create an anti-religion picture and instead created a film that testifies to the awful, awe-inspiring majesty of a people's faith.

I noted to the audience afterwards that Aunor had missed winning the best actress award in the Berlin Film Festival by one point, because she hadn't been able to attend. I also noted that many of the crew did their best work here--Sergio Lobo, Bernal's favorite cinematographer, came up with the hallucinatory images; Joel Lamangan directed the powerful crowd scenes; Raquel Villavicencio did the haunting production design (leafless tree standing twisted amongst the sand dunes). I finished with the observation that the image of Aunor's Elsa kneeling with palms pressed together and head thrown backwards is as iconic an image to most Filipinos as Scarlett O'Hara with fist upraised or Margo Channing grandly descending a staircase is to many an American viewer. 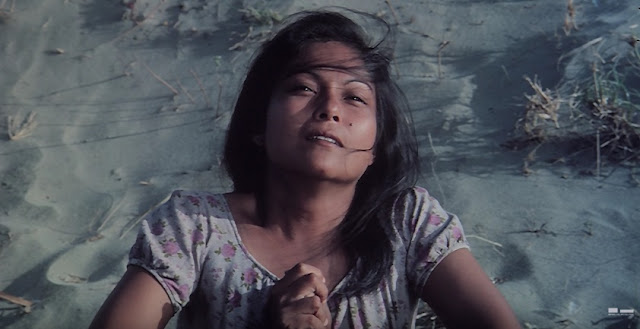 Your review of HIMALA is spot on.