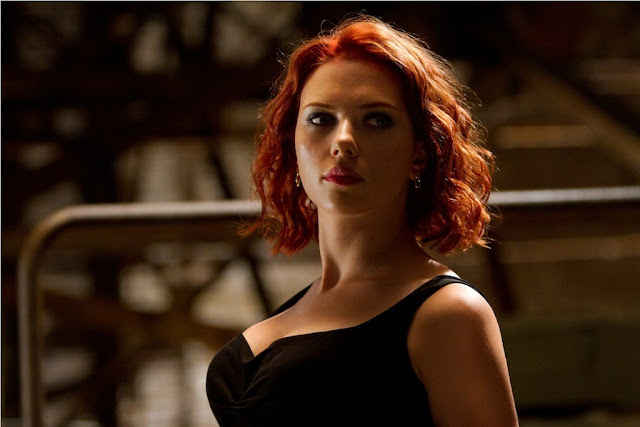 Joss Whedon's The Avengers (2012) is a pretty good comic-book movie.

How good? Let me put it this way: it's smarter than Zack Snyder's Watchmen (which unintentionally parodied--not to mention trashed--the more unsettling aspects of Alan Moore's book), more entertaining than Bryan Singer's Superman Returns (which spent too much time on melodrama, and limp melodrama at that), wittier and more varied than any of Nolan's Batman movies (Whedon's better at directing action, too), more moving than Robert Rodriguez's Sin City (okay, not saying much there).

It's a satisfying conclusion to what has been a lackluster string of Marvel movies--an indifferently directed Thor (Kenneth Branagh despite his Shakespearean chops couldn't bring his digital Asgard to life), a so-so Captain America  (Joe Johnston couldn't quite capture Jack Kirby's magic--the only reason to be interested in this square-jawed, straight-shooting hero), a passable Iron Man (passable only because Robert Downey Jr. could make even a metal armor suit amusing), a disappointingly dumbed-down Hulk (much prefer the more psychologically bizarre Ang Lee version--possibly the only Lee movie I actually like).


The difference probably being Whedon, who knows how to weld and meld clashing personalities (see Firefly); who can bring conviction and passion and freshness to the hoariest genre exercise (see Cabin in the Woods); who knows how to direct a coherent and inventive action sequence (see Serenity); who won't be lost in a big-budget studio production (see--well, this picture).

There are those that say "meh;" those that say "this is just another big budgeted superhero movie;" those that say "I prefer Cabin in the Woods." My reply: this is funny, intentionally so; the level of dialogue is of an intelligence and wit several steps above anything Marvel or DC's filmmaking units have done in years (not since Daniel Waters took a stab at it, actually). Whedon's achievement is in giving each character his due without forgetting the big picture, keeping the voices of half a dozen sensibilities distinct yet modulated, forming a symphony piece out of a cacophony of instruments.

Whedon puts so much time and effort in expressing said voices that the villain (Tom Hiddleston as Loki) is shortchanged (though he does have this nice little soliloquy about liberating humanity from its freedom--an idea that seems to have been borrowed from Dostoevsky), his army of alien robots (Aliens? Robots? Both, maybe?) barely memorable (they make a bigger impression on the Manhattan skyline). I don't mind, myself; this is about supersized egos clashing with each other, literally as well as metaphorically, and if you look back to the Stan Lee / Jack Kirby comic books, so was the source material.

Or as fellow enthusiast Paul Lee puts it: "The Avengers are like The Marx Brothers, only with superpowers."

When I queried further, he elaborated: "Iron Man is Groucho, the Hulk is Harpo, Thor and Captain America Chico."

"No," I replied. "Captain America is Zeppo, the boring one."

Actually, I don't agree on the last--Thor was a Zeppo too, far as I'm concerned. Scarlett Johansson as Black Widow and Jeremy Renner as Hawkeye give the heroes some angst and human-sized pain; Gwyneth Paltrow glowed in her few moments as Pepper Potts; Samuel Jackson makes for a charismatic Nick Fury, director of SHIELD (Strategic Homeland Intervention, Enforcement and Logistics Division, for those unfamiliar with the acronym).

Clark Gregg plays the small but crucial role of The Puppy. I refer to his Phil Coulson, a SHIELD operative longtime admirer of the Captain suspect to injudicious gushing ("I sort of met you, I mean, I watched you while you were sleeping"). He represents us, or rather the fanboy in us, or rather the fanboy in Whedon--a diehard believer, able and willing to give his life for an ideal. In the face of so much superhero-strength testosterone, it helps to have someone to identify with, even if he is a bit of a geek (that's the whole idea behind giving Batman a Robin, or Captain America a Bucky).

Which is what you might call Whedon--a Bucky, a true-blue believer in heroes and heroism, though one not unfamiliar with post-modernist twists and hip dialogue, able to take the tried-and-true (not to mention downright corny) and somehow make it shine again, somehow transmute the clay of our skepticism into the gold of faith.

For most of us, anyway. As for those that complain "Cabin in the Woods is better," well--they have a point.

Or something of a point. I submit that if Whedon had also directed Cabin it might have been a better film overall--it needed his  coherence, his visual inventiveness.

It's not even the best superhero movie Whedon's ever done--that would be the gloriously low-rent Dr. Horrible's Sing-Along Blog, which in forty-two minutes and for about $200,000 gives you more laughter, passion and tears (set to music, no less!) than The Avengers with its 143 minute running time and $220 million budget ever could. So if you want huge special effects and a super-hero movie done well (if conventionally), go see this picture; if you want the best superhero movie ever made, at least in recent years, go see Dr. Horrible.

Got a point there, even if he does link to a blog that discusses comic book movies...

My favorite comic book movie ever is still Brad Bird's "The Incredibles". It has a bit of Watchmen and Fantastic Four in it. It's also about having super powers and what we should do about it. Helen- "Everybody's special." Dash- "Which is another way of saying Nobody is." And that monologue, "No Capes!" is comic genius, done by the director himself.

Nice write-up, Noel. I'm seeing the film later this week and am looking forward to it. I'm actually surprised you liked it. I figured you'd tear it a new one in your typically witty, intelligent and snarky manner. Maybe you're getting softer or less jaded/cynical in your old age?

Just one quick correction to your piece (and yes, I realize I'm gonna be identifying myself as a geek here with this comment, but oh well): Your explanation of the acronym S.H.I.E.L.D. is accurate as to the original comic stories, but in 1991 they changed it to the "Strategic Hazard Intervention Espionage Logistics Directorate." In these new Marvel movies, however (beginning with the first IRON MAN) it actually stands for "Strategic Homeland Intervention, Enforcement and Logistics Division." The latter is probably my favorite of the three.

Dr Horrible is fantastic, so is this movie.

I prefer Read or Die to The Incredibles. Simply not not not a fan of Pixar--whatever they try to do next the Japanese seem to have done long ago.

Damien--thanks, will correct, but Jesus, some people's kids (mean the comic book writers, of course)...

Nah--I like Whedon. More than I dislike comic book movies as a genre.

"Dr Horrible is fantastic, so is this movie."

I do think this is more fantastic...

I mean, I think Dr. Horrible is more fantastic...

Noel ... nicely done and said. "Whedon's achievement is in giving each character his due without forgetting the big picture." Amen to that ... same thing he did with Firefly, etc. And his treatment of the female hero is more palatable in this movie. Thanks!

He's always been a good writer and, I think, good director; so if some ubersuccess by way of the boxoffice comes his way, for once I'm not crying out at the injustice of it all.

And his heart's at the right place. Women empowerment, gay rights, he's got it covered, pretty much.