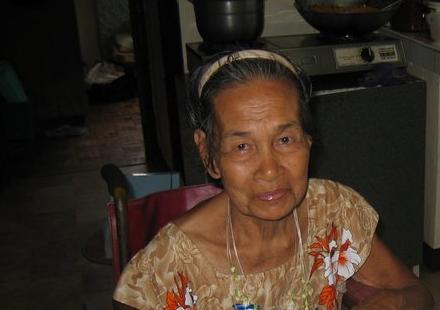 Florentina Borja, or 'Floring' as her friends and family called her, was born in Naga City on June 20, 1929. Her mother died when she was two, her father when she was twelve, during the Second World War. For a while she was raised by an aunt, who treated her badly, and refused to have her schooled. She had only finished grade six.


Before he died her father married her off against her will to a young man from a rich family--he felt there was no other choice, there had been stories of Japanese soldiers sexually assaulting and sometimes killing Filipino women. She had four boys by her arranged husband, the first at the age of fifteen. She thought him spineless, and too dependent on his family; after the war she left him with two of her elder children--she was forced to leave her two youngest behind--and traveled to Pasig City, where she got a job as a dressmaker. At the dressmaking store construction surveyor bought softdrink from her (they sold groceries as well) was and struck by her hazel-blue eyes and Spanish looks; she was impressed by his intelligence. They married in 1957.

She had five children by him; she lost the first two, fraternal twins, a girl and a boy. She raised the three by herself in Blumentritt, in old Manila, while her husband worked; later he started working overseas, in Guam and Hawaii, and she managed to invest his earnings in a piece of land, and eventually a house. She was ferocious, the way she guarded her children. She would guard her children outside the school they attended, spending the entire day there (sometime she would help out and volunteer as a substitute teacher). When a boy bullied her daughter T. in class, she waited till after classes for the boy, yanked at his sideburn, told him to stay away. Every time he would go to school she would warn him. He never bothered T.again.

She was extremely strict. She demanded that her children learn to clean house, do chores, buy and pick vegetables at the market (if the fish wasn't up to her standards, she would tell L.--the eldest--to go back; the vendors wouldn't argue because they were just as terrified of her).


She also loved them--hugged them, kissed them, teased them no end. She could be endlessly playful and would sing songs, and she had a lovely voice.

Even at the age of sixty-three she still had a lovely voice. I'd just met her, and she was a handsome woman with a wide smile by then. I'd fallen in love with L., and was visiting their house regularly. I never knew they were putting pressure on L., telling her I probably wasn't a good match--they were never anything less than warm to me. I don't think it was anything personal, just her in her mother hen role, guarding one of her children from some boy, the way she guarded them outside their school when they were young.

Things were different when I finally married L.--when I became part of the family, I found out what I'd been missing as a mere beau. We didn't have any place to stay, so she had us put up in a spare room in her house; we didn't have to worry about food, she cooked our dinner and breakfast.

Nanay Floring--I called her nanay (mama) by then--was from Bicol, and she cooked wonderful laing--taro leaves that she dried and cleaned and boiled herself to remove the irritants (a chore of several hours) then simmered with bits of fatty pork and chilies that L. and I (this was L's favorite dish) would spoon over steamed rice, a perfect reflection of her personality--naturally sweet, but fiery when aroused.


I never felt that fire myself. When I married L. she treated me like a favorite son, kissing me and teasing me and tousling my hair ("You have such lovely hair! So soft, so fine--"). That surprised and flattered me no end. I never took care of my hair; would never comb it, or pamper it, and no one ever complimented me on it either. Was she just being affectionate or did she notice something no one else did? I don't know; all I know is that she loved my hair.

I remember when a group of her friends had asked L. out for a date, a reunion of friends; she had told her parents and I that she would be home late. I couldn't help it; I was worried. I sat up in the living room and nanay sat up with me, fuming. When L. finally got home nanay was the first out the door, furious at L. L. felt embarrassed before her friends, but nanay didn't care; I was worried that L. wasn't home, and as far as nanay was concerned, I had every right to be worried.

I have to mention my favorite of her dishes--ginataang bulaklak at talbos ng kalabasa (squash flowers and sprouts in coconut milk). Bright orange squash flowers and the tenderest leaves and tendrils simmered in coconut milk, with chunks of glistening pork and small briny shrimp that brought out the sweetness of the milk, contrasted with the faint bitterness of the greens.If the way to a man's heart is through his stomach, she had me at the very first pressing of her coconut milk. If the best dishes are 'made with love,' hers are made distilled and pure--made with the fire and sweetness of her very soul.

I remember nanay meeting my own grandmother, and my grandmother taking a liking to her, which was, frankly, amazing--my grandmother was a very reserved, very quiet woman, and rarely liked anyone. To the end of her days she wanted to meet nanay again, and I often thought of arranging something--but my grandmother was bedridden by this time, and nanay had a hard time traveling (she had to stop cooking for us by then). I always regret not being able to bring them together again, at least one more time.

I once remember arguing with L. over money matters--some of the worse arguments in a marriage are over money matters, and raising my voice. Nanay Floring was between us and in a way this concerned her too. She was upset, she had tears in her eyes, but not once--not for a second--did she raise her voice against me. L. was her daughter and she supported L., but I was her son, I could do no wrong in her eyes, and I imagine the conflict tore her up inside. I felt bad about it afterward--in many ways I felt as if I had taken advantage of someone helpless to resist me.

On October 18 nanay had a stroke; she couldn't move or talk. The people caring for her said she had a sad look, as if she wanted to say something, but couldn't say it. It was her fifth stroke; the doctor said she should go home, there wasn't anything left to do, so on October 22 she did. Her husband and son--L.'s brother--took care of her the best they could. A week later she passed away; we learned the news over the phone.

L. of course was devastated--she owed everything to nanay. But the news hit me hard too. I regret not being able to see her again, hug her again, tell her how much I owed her, how much her cooking and caring and teasing and loving meant to me. I miss having her hand on my head, gently rubbing my hair. For some reason I've been keeping it short ever since--I don't feel as if I have to keep it long for anyone, not anymore.


An adaptation of one of my favorite of her creations:

Saute onion and garlic in cooking oil. Add liempo, saute some two minutes. Add bagoong, siling haba, and gata, cover and simmer for 5 minutes or until the vegetable is tender.

Add shrimp, squash fronds and kakang gata; season with patis, and pepper to taste. simmer for two minutes until the squash leaves are tender. Eat with steamed rice.

Sad to hear of your loss (I lost my own mother in June -- and she had also been my wife's only mother for almost 25 years).

I am so sorry I missed this the first time around. My deepest condolences. For obvious reasons, I identify. The mother-in-law relationship is one that can take on such an array of meanings; having a woman you grow to respect, and love, is the best of it. This is a beautiful tribute to an incredible woman. May she RIP.

Siren, thanks. I appreciate your words very much.

Mother in laws are a funny thing. They can be the worse relationship in the world, or one where you choose not to fuck it up the way you might have your own relationship with your own mother, or--it chooses you. Or she decided that I was as much a son as her own ever was. I didn't deserve that kind of love, I hope I can live up to it...maybe one day feel I am deserving of it.

This simple narrative is a breather from your seminal critiques. I thought I was drawn to your introduction that your mother-in-law was a Bicolano. My regional kinship with her served as a scent of a simmering laing. I'm glad I read to the end. You pined for a lost love in earnest, sad because of the longing to reciprocate her selflessness, which makes the loss more tragic. You write with your heart in the right place is why your pieces brim with passion and grace. My belated condolences.