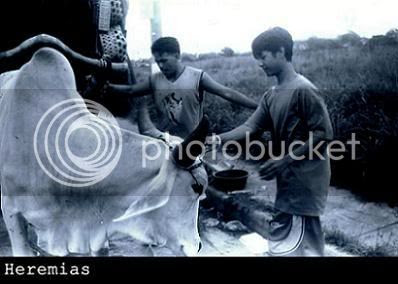 Diaz had told me once that he was interested in making a film about these people--traveling peasants who pile their covered wagons high with bits of handicrafts (rocking chairs, brooms, baby walkers, and so forth), make their painfully slow way into town, and sell their wares for remarkably low prices (you wonder: if their products are so cheap, how much did these people spend acquiring--or making--them?); here is the film he talked about, in all its implacable glory. For a time we see nothing but Heremias and his wagon, pulled by a carabao (we get to know that carabao quite well), rolling from one end of the screen to another; the road--dirt as often as asphalt, stretching past houses and hills and trees--often forms a diagonal on which the small figure and his wheeled vehicle ambles (slowly, slowly) along. At one point a typhoon rages while the wagon goes down a forest path--diagonally situated, as usual, this time from right to lower left--and we wait for the wagon to reach the path's nearer end before Diaz cuts, as he's done so often before. Suddenly a sapling falls across the way; the path is blocked; the slow and steady motion we have come to expect from so many hours' variation on this particular composition cannot be completed--cannot be fulfilled, if you will. We watch in mounting frustration as Heremias gets off the wagon, chops the sapling up, pushes it out of the way; eventually, he manages to clear the path and move the wagon forward, reaching the lower left corner of the screen; you're almost thrilled at the accomplishment.
at 4:42 PM

well, its one hella movie. Good thing that I had the patience to endure it. But it has also its own rewards.

By the way, I've already updated my link to your blog.

The movie is definitely different. The struggle of finishing it and enduring the hour long high and down of the teenage gang drug session became almost a test of patience, understanding and sanity. Its reality yes.... but then, thats where the question of entertainment and art film comes, doesnt it? I dont think an entertainment film would be willing to jeopardize their popularity by torturing the viewer of the hurtful truth.
I love this film.... but I also would love to see the other ending that could be. I heard that Lav Diaz has another edited ending before Heremias swore on fasting for 40 days and nights if only the life of the girl could be spared.
Would Lav Diaz be willing to show this disturbing ending to us? I hope so.

Haven't heard of an alternate ending. I imagine it can be included in a dvd, if there ever will be one. I'm still waiting for a dvd of Batang West Side, and that film was back in 2001.