From my old blog--Quark Henares' Keka 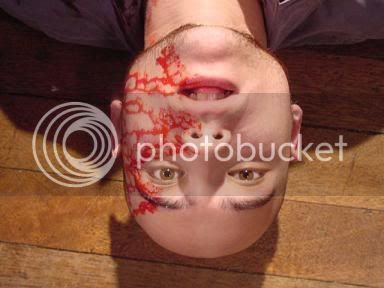 I can see where Quark borrows--basically, Truffaut's The Bride Wore Black with maybe a little of Brocka's Angela Markado (which takes off from Truffaut), some heavy influencing by Mike de Leon's Batch '81 and, I'm guessing here, deadpan black-comedy tone via the Coen Brothers. I wouldn't know where "Kill Bill" comes in--I'd say Quark and Tarantino just followed parallel muses.

Nothing wrong with borrowing; as a matter of fact, Tarantino's bag is bigger and more varied. But there's borrowing extensively and there's making a film; one requires knowledge, the other talent. Tarantino's knowledge may be far bigger, but I'd give Quark, smaller budget and all, the credit for being the better talent, somewhat. He knows how to cut and frame his images, he knows how to put together his shots and make them flow. It's not just a style cobbled together by an expert cinematographer and a good editor; it's a look that's an extension of the filmmaker's sensibility. Well, I suppose Tarantino has an edge on scriptwriting--though I'd say that's an extension of his grab-bag knowledge.

But Quark's young--damned young. He'll grow, for sure.

Some flaws: the Bhong character feels more like a plot function, and his and Katya's conversations seem unbelievable, talking so breezily about murder and all; I thought it would have streamlined matters better if she went at it alone, and the relationship be mainly a triangle betwee murderer, cop, and intended victim.

Also, the psychology isn't deep; this isn't much of a character study of a young girl turned vengeful psychotic. The motive felt weak--Angela Markado had a far better reason for cracking up and killing (so did The Bride in Kill Bill, come to think of it). There are some plot loopholes--the cop when he realizes the answer shouldn't have gone elsewhere to confirm his suspicions, he should have gone straight to the girl. I'd like the confrontation between girl and final victim to have been more physically inventive.

But those are minor cavils, especially the ones about psychology--at least, they don't totally destroy enjoyment of the film per se. Quark, unlike say fellow Filipino filmmakers Erik Matti or Yam Laranas, know how to juggle his storyteling, to inject just enough style to make the film watchable, pay enough attention to the story so that it's not blatantly stupid, give enough emphasis to character and story so that your interest is sustained. He knows how to keep his balance, in other words.

I think the final final scene is fairly original (at least I don't remember anything exactly like it, if someone could tell me otherwise please do so), a sort of joke about what kind of film this really is.

No, there's not a lot of profound social comment in this film. Some acid commentary, some satiric subtext of among others male models, untouchable politicians (or their sons), policemen, and the state of morality of the Filipino youth.

The film IS, however, a pretty accurate portrait of the state of mind of a certain kind of middle-class youth today, one that I'm sure the professors of a certain educatonal institution holds in utter contempt. Well, this is their movie, nor do I think they care about who would feel contempt for them. It's one more film to add to the diversity of Philippine cinema.