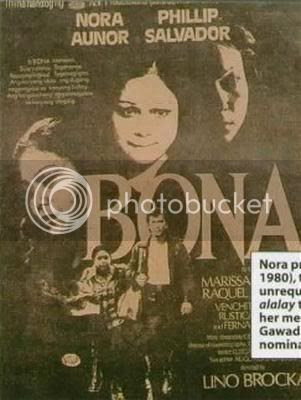 Lino Brocka's Bona is possibly the least-seen of his major works, partly because the two remaining good prints of the picture had been squirreled away abroad (to the Cinematheque Francais and the New York Metropolitan Museum of Art) while Filipinos back home had to content themselves with fading recollections and equally faded Betamax tapes. Everyone remembers how powerful the film was; no one can rightly say they've actually seen it, at least in recent years.

It's exciting news to learn that Cinema One with the help of the Cinematheque is broadcasting a clear new video copy of Bona, one with French subtitles. For a new generation of viewers--one barely able to recognize the name of Brocka--this is a chance to finally see a famed classic; for those who remember the film from its Metro Manila Film Festival run this is a chance to update (and possibly destroy--but that's the risk of any revival) their Beta-assisted memories with freshly minted images. Whichever you are, veteran or innocent, even twenty-six years later there's much in the film that can still shock and appall.
at 12:09 PM

kudos to the greatest director in pinoy cinema..

He's one of the great ones, definitely. And easily the most famous.

just stumbled upon too late with this post...i just wonder if you have a full review of Bona,,,ive just had a few glimpse of this films specially the key ones...but those images are enough for me to conclude that cinema filipino isnt complete without this film...im a sielnt critic myself and i also have my own biases to mario o hara and nora aunor's condemned (maintaining my 2 cents worth that it's the best of all ate guy's films, wit due respect to Himala and all the rest). heard some legends in the past that when bona was shown in cannes, editing, or something wasnt yet entirely finished...so they had to do with the duct tapes and scisssors...and woild want to know if this is already available in dvd formats....thanks, ive been a fan since time immemorial

I don't know how much fuller you need it to be Guru, from where I'm sitting it's a pretty long article.

Far as I know it's not yet available on DVD, but it is showing on Cinema One, which is available in the US in The Filipino Channel.

just saw it in cinema one today. brilliant ending.

It's an effective formula; very Filipino. If Brocka had lived longer I think he'd start thinking about why that's our formula, why we think and feel that way, and just what's wrong with that kind of thinking. But he never did.

There's plenty of aspects of our story out there still to be told, maybe even chewed over, digested, absorbed; hopefully our filmmakers come around to telling it.