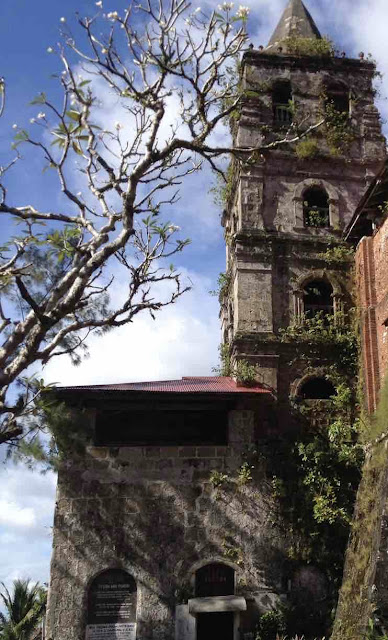 I went to St. Gregory the Great in Majayjay, Laguna back in--well, I think it was in 1998--and we did a tour of the Laguna churches for the Holy Week. There were other churches in better condition and more ornate, but the one in Majayjay was the most awe-inspiring, with its simple yet gigantic stonework, its mantle of shrubbery (even the top of the belltower was overgrown, and I wonder if someone climbs up there to prune the branches, how strange it must feel to trim a church's fuzz), its ancient interior (it was a bamboo and nipa structure first set up in 1571 and has grown ever since; the last major work was done in 1912). 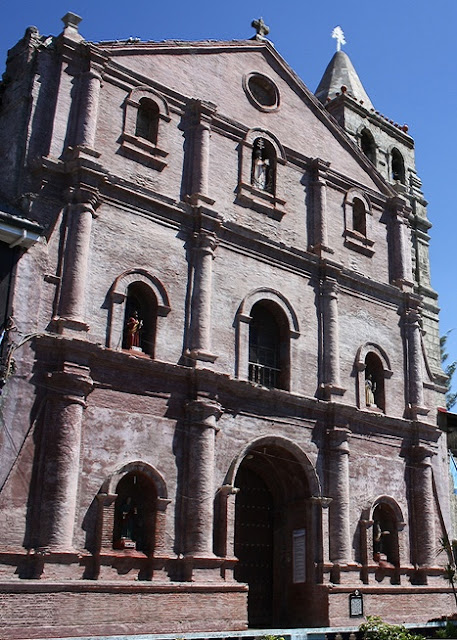 I talked to this old man sitting at the steps of his house in front of the church, mentioned how Majayjay was a popular location for movies, and rattled off some titles--Maruja, Ganito Kamin Noon Paano Kayo Ngayon (You Were Thus Then, How Are You Now? 1976), so on and so forth. The old man was very polite. Then I mentioned Tatlong Taong Walang Diyos and he goes "Oh yes! That movie! Did you know Nora did her makeup in this house? Did you know that's the church in the movie? Did you know the elementary school is down that road? Did you know the bridge is over there? Did you know the house she lived in is over there?" Di naubusan ng kuwento (he couldn't stop talking).

We went to the bridge, the Puente del Capricho (Bridge of Whims). It was a twenty-minute hike through a path, and hardly anyone used it. The bridge itself was overgrown but still impressive in a massive, brooding way. 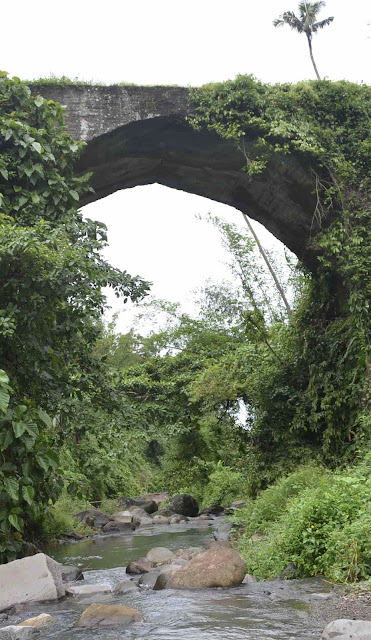 On the way home, we were looking for the house Nora lived in; it was on the road we used driving into town, but I never recognized it. We went down the same road looking for it, and not five minutes out of town, I spotted it; earlier, I must have been looking at it from a different angle than the one I remember from the film.

It was closed down, but someone was living there--the window shutter opened, part of a woman's face peeped out. We said we were visiting it because of--well, Nora had filmed here for Tatlong Taong Walang Diyos, does she remember that picture? The woman in the window smiled and waved.

great pics Noel... where's the bridge. you mentioned that you had one taken there as well.

Thanks, Jo. Sorry, I didn't bring the pictures of the bridge with me. They're in Fairview.

Great post, Noel.
It's a great town. I grew up there. I watched Eddie Romero when he shot Ganito Kami Noon, Paano Kayo Ngayon there. I also observed Celso Ad Castillo while shooting Pagputi ng Uwak, Pag-itim ng Tagak. And yes, Mario O'Hara shooting Tatlong Taong Walang Diyos. These films were shot during the same period. So on ordinary days, it was normal for us to see walking on the streets such stars as Gloria Diaz, Christopher de leon, Nora Aunor, Vilma Santos, Bembol Rocco, etc. Some members of the cast even lived in my Grandma's house while shooting the film. Those were exciting times.
And don't forget Susan Roces. I also saw her when they shot the original Maruja there. I was a toddler then though. But I still remember the scenes vividly.

And Jojo, found a pic of the bridge