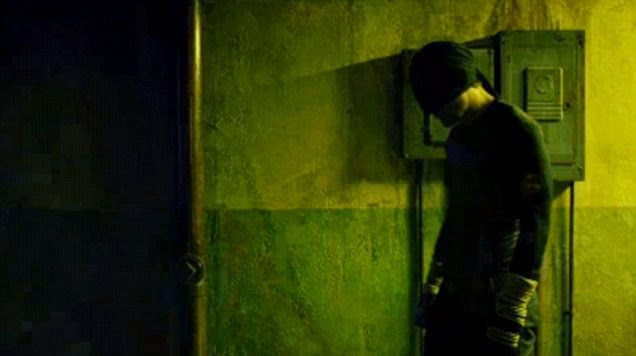 Interesting how the comic book Daredevil's tagline (man without fear!) is worn as a point of pride and not embarrassment. Arguably one of the more emotionally potent points Joss Whedon makes in his multimilliondollar superproductions is that his heroes lack some quality that renders them less than normal, rather than enjoy an extraordinary ability that upgrades their status to supernormal (Tony Stark has no humility, Steve Rogers social context, Thor a sense of mortality, Clint Barton and Natasha Romanova clean consciences, Bruce Banner consistent and effective impulse control). The deficiency humanizes them in our eyes, renders them less godlike and more accessible.


Part of Daredevil's mythos is that he's a blind superhero, a vigilante who fights crime while suffering a major physical handicap (we're not talking chronic back pain, here). The blindness functions as contrast, showing up just how much more uncanny his enhanced senses are; it also helps bring him down to our level, a figure worthy of our sympathy, if not outright pity (as his alter-ego hotshot young lawyer Matt Murdock (Charlie Cox) puts it "I'd give anything to see the sky one more time"). Truth to tell, the phrase 'man without fear' seems wrong--this Daredevil (or 'Devil of Hell's Kitchen' as he's initially more lyrically known) does feel pain, fear, shame, and regret (maybe it's meant ironically?). The words sound like so much bombast: 'man without sight' would've been more accurate, would indicate how the character's appeal really works.

There was a big-screen adaptation, done by Mark Steven Johnson (who scripted Grumpy Old Men; Grumpier Old Men; directed Simon Birch, a loose adaptation of A Prayer for Owen Meany). Moving on.

Whedon collaborator Drew Goddard (Cabin in the Woods) helped initiate the Netflix series, passed the baton to fellow Whedon collaborator Steven DeKnight (Dollhouse; Angel). If I seem to be emphasizing the developmental fingerprints, that's basically to point up the fact that this for all intents and purposes is a Whedon project, or one that shares his largely character-driven, genre-oriented sensibility.

And it works, for the most part. Daredevil starts out small, neatly sidestepping the problem of how to present the hero's origins without provoking laughter (hit in the face by a cannister of radioactive material that bounced off a truck? Give me a break!) by showing the accident after the fact, with father Jack Murdock (John Patrick Hayden) arriving late and piecing together what happened from different POV shots (truck accident; man explaining how he was saved; young Murdock (Skylar Gaertner) on the ground, chemicals eating away at his eyes). The various characters are presented under gloomy sodium-and-shadow lighting, on studio sets and largely Brooklyn locations carefully chosen to evoke the Hell's Kitchen of the '70s (the real neighborhood is considerably more gentrified today). The effect is disorienting, as modern-day characters sporting cellphones and internet-surfing laptops inhabit a vanished urban landscape--but perhaps this was the kind of stylization they were going for.

The series doesn't quite take the same tack as Christopher Nolan did with his ultragrim Batman movies: Nolan treats his superheroics with an annoying amount of reverence; De Knight and company are content to allow the material some respect, leavened with a generous helping of verve and imagination.

The series is also so-not-Gotham. That superhero TV series (for DC Comics) opted for a more radical neverland look, unconnected to any particular place, and I think loses in comparison--viewers of the newer show  connect to the familiar (if somewhat skewed) cityscapes; viewers of the older show are left with grooving on the cool digitally-enhanced helicopter footage.

The series can be coy: full grown Murdock (Charlie Cox) is shown early on confessing to Father Lantom (the superb Peter MacRobbie), not for sins he's committed but for sins he's going to commit; flashbacks explain why he's doing this along the way. When he shows up as a crimefighter, he isn't even wearing the comics' iconic red skinsuit, complete with billy clubs and horns; instead it's a severe black with eyeless mask (ordered "from the internet," Murdock explains).

Murdock's arch nemesis Wilson Fisk (Vincent D'Onofrio) is introduced by the end of the first episode as a mere voice, gravid and quietly confident (A law firm making trouble for one of our companies? Start a file--they may be useful someday). D'Onofrio's Fisk is lovingly rendered, a businessman with shady dealings who we learn--also from flashbacks--suffers from a childhood trauma, and has a vision of urban renewal for Hell's Kitchen (like I said: disorienting).

Murdock beats Fisk's men senseless; he works his way up the chain of command to the (literally) big man himself. Fisk in the meantime is preoccupied: he's fallen hard for art gallery manager Vanessa Marianna (Ayelet Zurer) and seems irritable, distracted. You may be forgiven for thinking "Hold on, so Matt's the violent club-wielding hero and Fisk the romantic soft-spoken villain?" DeKnight and his writers do a good job sketching everything in shades of gray, the good guys flawed and uncertain, the bad guys smoothly reassuring (in contrast to their loudly exclamatory minions--fact is, you can tell by the style of rhetoric (smooth or swaggering?) how high up the ladder they are in Fisk's hierarchy).

D'Onofrio's Fisk is particularly superb. He seems to draw from both the threatening and pathetic aspects of his 'Gomer Pyle' character in Full Metal Jacket, giving us a glimpse of both the vulnerable child within and the threatening sociocopath he's developed into since (you might call Fisk a more alarmingly able Leonard Lawrence).

If the storytelling reminds you of The Wire that's not entirely inappropriate--the makers have admitted aspiring towards that series' brand of moral ambiguity and multilevel (from street to penthouse suite) complexity (not to mention identifying with a specific city--Baltimore for The Wire, New York for Daredevil), with threads everywhere: drug smuggling, human trafficking, high finance--and in fact the main scheme (Fisk as real estate developer) sounds like something Stringer Bell was trying to do, complete with talk of zoning laws and city permits and below-the-counter senatorial aid. Daredevil doesn't touch those heights--not even close--but does achieve a kind of  cartoon equivalent, with D'Onofrio's Fisk at the center of its (fairly bewildering) web.

A pity then that despite its gritty look and narrative intricacy the action sequences come across like so much corn beef hash--a double pity as the fight choreography (what little I can make out) seems especially good, with Cox flipping all over the place and leaping off walls to give his blows greater impact. I know this is about a blind superhero, but must our view be equally impaired? Couldn't they have imported someone from Hong Kong to direct? Only two fights really work for me: one occurs late in the series, when a man shuts his eyes and breathlessly waits for the bullet to his head and--in a nice parody of Murdock's condition--finds himself listening to a fusillade of heavy-caliber shots, a series of crunchy blows, a chorus of desperate cries.

The second's even better, an early episode where a child is kidnapped and his father beaten in front of him, the case reminding Murdock of the circumstance surrounding his own father, a second-rate boxer. The episode's climactic long-take shot could be read as Murdock's fantasy of how his story should have ended, this being his chance to set matters--this boy's childhood and his--right, once and for all. The battle takes place in a hallway, with the camera gliding up and down its length, the struggles cleverly falling in and out of doorways (less action choreography to muck up) suggesting titanic conflicts occuring offscreen, the whole a homage to Park Chan-Wook (without alas Park's inimitable visual elegance).

The series shows the influence of artist-writer Frank Miller, who left his mark on the comics in the '80s (the story of Murdock's father and how he died was Miller's invention, from one of the comic's finest issues), though I really prefer the noirish work of Gene Colan back in the '60s and early '70s. Yes Miller redefined the character storywise, but failed to erase my memories of Colan's shadows and motion blurs, his fluid way with hardboiled action.

Worse than the action is the series finale, which drops the Wire-like pretentions and aspires (descends?) towards Marvel Universe-sized opera. Fisk becomes the Kingpin, an unrepentantly rotten baddie, and Murdock becomes Daredevil, complete with cloth armor, billy club and halo of nobility (oh give me back the black!)--something has been taken from these characters, the end result less enriching than infuriating. Will the series rediscover its noir roots, or will Iron Man drop in for a surprise guest appearance? Stay tuned till 2016 for the conclusion to this unexpected cliffhanger. 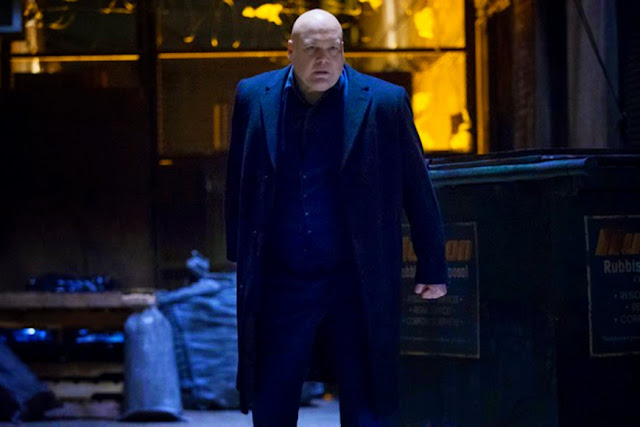 I understand where you're coming from, but the series has the awful issue of trying to do a Wire-ish/noirish storyline, while remaining true to the larger than life, four color universe that they're in. Early on in the series, the first Avengers movie is referenced as 'The Incident'. "The Incident? That's what we're calling it now?" one of them asks. This nominally exists in the Marvel Cinematic Universe, so they have a fine line to walk.

And sometimes they come down on the wrong side of it.

They did fine till the end. Then they fell off the Wire and just went back to boring ole Marvel Punyverse.

Easy to ship them between sets, then.