Doh!minous Rex
When I think of the Jurassic movies, I'm reminded of one of main principles that drive the theory of evolution: that everything in the process--from genetic mutations to mass extinctions to climate change--has the effect of forcing the surviving species into becoming smarter, more capable.

Then I look at the franchise's latest entry and think: well, there goes the theory.


Call Jurassic World the bigger, toothier, dumber cousin of the first two (the third I won't even consider; only William Macy deserved to outlast that disaster). Having an established operating concern is something of a mistake (the first was set in an unopened park, the second in said park's ruins); you think 'contingency plans' and wonder if the entire upper management was too strung out on cocaine to think of any--why, for one, don't the park employees carry anything  than a cattle prod? Took one look at their 'non-lethal' weapons and had to laugh; got a thirty-pound (well almost thirty) cat that could shrug off that prod's charge, roll over, go back to sleep (see below). 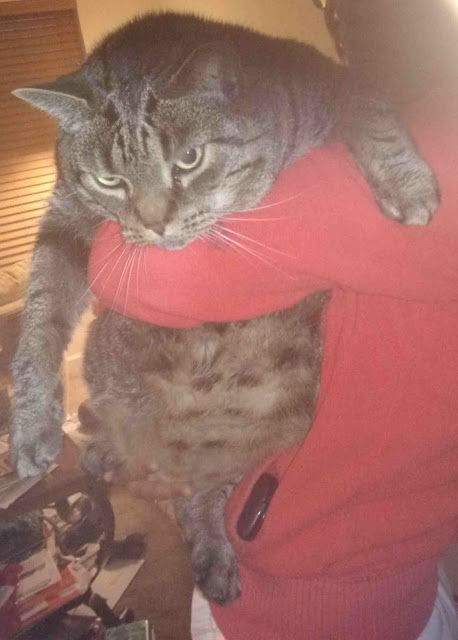 Jurassic cat, back when he was only twenty-four pounds

How about a grenade launcher? And in fact someone does fire one at Indominus Rex which could've worked, only we're supposed to believe that in the ensuing panic they'd a) miss; b) forget to bring a spare RPG; c) fail to keep calm and remember this is mainly flesh and bone--anything bigger than a .50 caliber should have worked, including heavy gasoline-powered vehicles.

Not that Indominus is all that formidable; yes the bit about clawing the walls was clever, but beyond that the coelurosaur seems dimmer than your standard-issue meat eater (on the other hand the velociraptors in the first and especially second are not only smart and imaginative they actually seem to have a wicked sense of humor).

The dinosaurs here illustrate a problem I have with modern creature features, in that the filmmakers would rather pick the brains of a biologist/paleontologist than their own imaginations--look at Kong '33 compared to Kong '05: '33 acted like a monster, '05 like an animal; you believe '33 can kill, but given what we know about gorillas today it's confusing to see '05 do the same (real gorillas can be aggressive but rarely injurious, much less homicidal). When '33 battled a T-Rex (one of the all-time great faceoffs in movie history) you noticed Kong going for the T-Rex's leg, trying to pull his opponent off-balance (turns out directors Cooper and Schoedsack were wrestlers and choreographed the moves accordingly). Yes, the fight was restaged for '05--but a gorilla doing wrestling moves? Sometimes a slavish if well-meaning focus on realism only gets in the way of a good movie.

I'd say the key ingredient missing in this latest installment, what once made the whole shebang so much fun (and so commercially successful) is Spielberg. The filmmaker for all his flaws (a thuddingly bourgeoisie sensibility, a wide sentimental streak, an inexplicable longtime dependence on composer John Williams for all his candy-corn scores) knows how to direct a memorable action sequence, and his secret I believe is this: he loves to play--with the frame, with the editing, with the camera, with the actors, with various objects onscreen (and a few off). Duel (and its bigger budgeted spiritual cousin The Sugarland Express) was basically an afternoon spent pushing around an impressive collection of Matchbox toys; Jaws was an extended game of hide-and-seek (the shark hid, we sought--on occasion the shark would pop up and bite us in our collective ass); Close Encounters of the Third Kind was a kid high on LSD, sticking his head inside a pinball machine: lots of lights and music, orchestrated with supreme (if shallow) skill; 1941 (my favorite of his pictures) was his tendency to play raised to self-destructive extremes--the (as Welles once put it) world's biggest most expensive most elaborate toy train set blown up for our entertainment (it failed at the boxoffice I submit because for once Spielberg was following his own primal impulses, not calculating that of the audience's).

By way of comparison look at the gyrosphere attack, obviously modeled after the T-Rex assault on the two kids in the first movie. Spielberg loves to surprise his audience, to present an everyday object suddenly used in an unexpected and radical manner--in this case the vehicle's plexi roof. You expect such a roof to let in sun and keep out rain; you don't expect it to be used as a shield, in this case by two terrified kids against a rampaging carnivore. You also don't expect the plexi roof to serve as witty commentary on the mobile screen (a comment that plays better today than in '93): the day's entertainment, a living dinosaur, suddenly become IMAX 3D--up close and terrifyingly personal.

The gyrosphere on the other hand doesn't seem to evoke much of anything other than memories of this earlier, better scene--seems considerably more stable and more solid than a hastily held-up sheet of plexiglass. The ball in the creature's jaw might remind you of a dog worrying a glass marble, but the urgency, the sense of immediate threat, just isn't there.

Trevorrow isn't incompetent. He accomplished plenty with his no-budget earlier feature Safety Not Guaranteed and here sketches his characters with more care and detail than is normal for a Hollywood megaproduction--one kid is undergoing hormonal changes, the other suffering from their parents' divorce; the lead actress is a buttoned-down corporate type who must learn to, well, unbutton (I said 'more care and detail,' not necessarily 'better'); the lead actor is a Raptor Whisperer of so-so abilities (a subplot about raptors having uncertain loyalties towards their whisperer feeling more than a little muddled).

All that said the movie will have earned half a billion dollars on its opening weekend, is in fact on its way to being one of the biggest boxoffice earners in history. "Well," one might say "what does this bit of news do to your thesis about 'reverse evolution?'" To which I might reply: "who says it applies only to movie franchises? God help us, every one!" 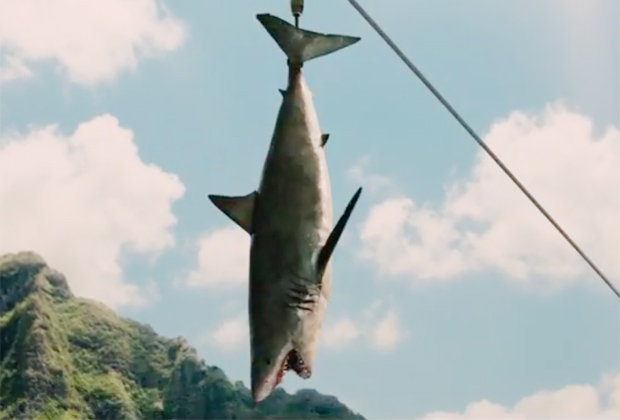 Got to hand it to Mr. Martin: he wields narrative in his Song of Ice and Fire novels like a fine instrument, going for our nerve endings like a skilled surgeon, or military interrogator. People note his skill at depicting cruelty, and violence (sex not so much; HBO amped that element up considerably); don't see as many noting his skill at, well, making us care.

Martin seems especially adept at maintaining one's ambivalence towards a character: Stannis Baratheon a self-righteous stump, a hard man and a bore? Give him an afflicted daughter he cares for deeply. Cersei Lannister a coldhearted manipulative bitch with incestuous appetites? Give her a loveless marriage and unswerving loyalty to her children.

Even Martin's characters of purer alloy seem vividly sketched. There's little that's despicable in Jon Snow--if anything he seems cast in the mold of classic heroes, complete with great heart and great sense of compassion. Give him an even greater sense of doubt then, to lend his goodness the texture of credibility.

Does Cersei deserve her fate? No doubt; she plotted her husband's death, abused both her daughters-in-law, and brought King's Landing to near ruin. You dearly want to see her comeuppance--so Martin gives it to her and keeps giving it to her to a point that has you almost gasping, almost wanting him to stop.

Does Snow? Think about it: the boy shares the same weakness as his father--he lacks the necessary ruthlessness to protect himself and harm others, long enough to execute his plans properly. It's logical; it only feels tremendously unfair.

*(Might note here that in telling the late Barratheon's story the adaptation recalls elements from Shakespeare's infamous Scottish play, from a witch and her prophecies to men abandoning their king to the sense you get of Stannis' face growing harder and harder as he realizes the hopelessness of his position. Not to mention Snow's final scene recalls a similarly dramatic one in Julius Caesar: Martin doesn't improve on the Bard's lyric language, but thanks to the lengthy format of serial television and the time invested in getting to know these characters the enormity of Stannis' act hits especially hard; likewise (in the case of Snow) the sense of a brilliant young life abruptly shortened.

Also note that Arya's pulling off various faces from a dead body is possibly a quote from Patrick McGoohan's The Prisoner; between this and the at one point delightful throwaway reference to Terminus Est, I'm guessing the showrunners (or at least their writers) are great fans of science fiction--not so strange considering Martin himself is an accomplished SF writer) 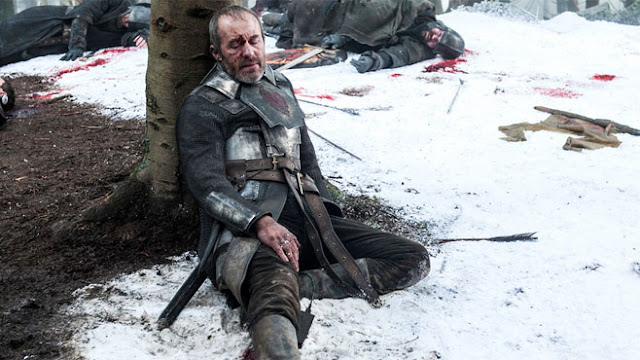