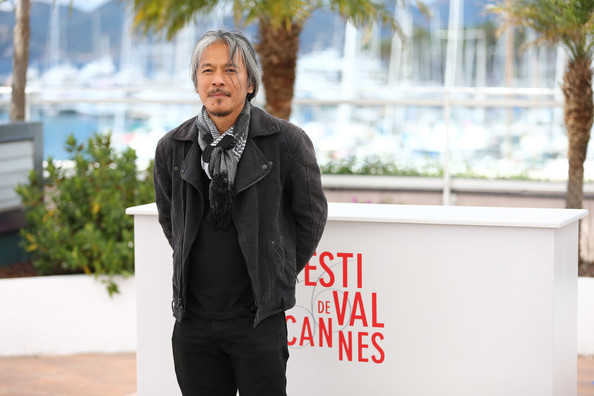 (Due to popular demand: the original English text used by the organizers for their Lav Diaz retrospective at FilMadrid: Festival Internacional de Cine de Madrid)

Evolution of a Filipino filmmaker

Lav Diaz's visual and storytelling style has been in a constant state of flux starting with his first produced film Burger Boys (1999)--a crime caper so surreal the producer delayed its released--to his first commercially screened feature Serafin Geronimo: Ang Kriminal ng Baryo Concepcion (The Criminal of Barrio Concepcion,1998) to his first fully realized work, the four-hour Batang West Side (West Side Ave., 2001). 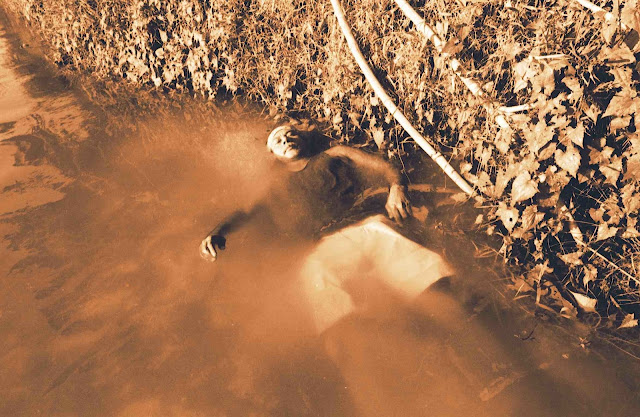 Call Diaz's Ebolusyon ng Isang Pamilyang Pilipino (Evolution of a Filipino Family, 2004) his version of Bernardo Bertolucci's 1900: a ruinously ambitious ten-hours-and-forty-seven-minutes politico-historical epic. If the film is flawed--it switches between digital video and 16 mm footage in confusing fashion--the fault is partially excused by circumstances (Lav couldn't raise the funds to buy more 16 mm film), partly excused by its aspiration to be no more and no less than a chronicle of the country's major historical upheavals starting with September 21, 1972 (former President Ferdinand E. Marcos' declaration of Martial Law), through Marcos' 1986 downfall and replacement by housewife Corazon Aquino, to the Mendiola Massacre a year later where protesting farmers were shot by police (arguably the moment Aquino's leadership lost its bloom), all seen through the eyes of two Filipino families. For such a sprawling work (more than twice the length of the longest version of Bertolucci's opus) it's remarkably austere: Lav's first foray into digital video filmmaking, first effort in black and white (he started shooting the 16 mm footage in 1994); more, it's almost inexplicably light on exposition, shifting without apology or explanation from past to present, documentary to fiction, one family to another.

Where Bertolucci's film is a riot of violence, sensuality and color, Lav's is stuffed with odder elements: a series of overheard radio plays that function both as hilarious comedy relief and as parody of the melodramatic tendencies of Filipino dramas; a subplot involving the Marcos administration's covert (if fictional) attempt to assassinate Filipino filmmaker Lino Brocka; a coda attached to the end of the feature titled “A Tale of Two Mothers."

More than its length however, or black-and-white look, or extended silences, Ebolusyon is perhaps the greatest, most comprehensive attempt ever to capture the quality and flavor of Filipino provincial life. Rice paddy and highland forests; plantings and harvests; merciless noon heat and the absolute dark of the nighttime countryside--Diaz shoots it all, shoots enough so we get to savor the kind of measureless existence the people experience within the various landscapes. Women walk down a path, sit to rest, rise up to continue; a pair of boys wrestle, pause from exhaustion, wrestle some more--this is life in the provinces, and if we city folk think we'd go crazy trying to live this way (much less watch it on the big screen) we had better brace ourselves: civilization, when you step back to look at the big picture, is a mere blip on the big screen of existence. From living this way to living in a modern apartment back to living this way is possibly the space of a few hundred years, maybe less.

Encantos is especially interesting--where Lav usually establishes a contrast between the breathtaking Filipino countryside and his characters' existential angst, in Encantos he filmed right after the passage of Typhoon Reming (internationally known as Typhoon Durian), and the characters' inner turmoil seemed to correspond with the surrounding devastation (more on the film later).

After ten features Lav's Siglo ng Pagluluwal (Century of Birthing, 2011) finally turns the camera lens towards himself, or at least some analog of himself--a filmmaker named Homer (the allusion seems outrageous, less so when you think of his patriarchal relationship over the present crop of Filipino independent filmmakers) trying to finish a film titled Babae ng Hangin (Woman of the Wind, about a nun trying to experience 'real life' by forming a relationship with an ex-convict). The nun's story rhymes with another woman's story, a 'sister' from a religious cult, who is followed by a visiting photographer (the correspondence is further complicated when you consider the photographer yet another analog for the independent filmmaker), rhymes with the story of yet another woman, a call-center worker who is secretly pregnant and who (bringing the whole thing to a full circle) meets the filmmaker--an old friend--on his way to the countryside.

Along with women, sex, death, and pregnancy, the film depicts in no unflattering terms the invincible insanity of religious extremism. Lav is careful to sketch out a fringe cult, the kind that sends its believers out in the world to sing and pass leaflets, but in the cult leader's insistence on the purity of his followers--that his women be untouched virgins (no mention of any such requirements for the men, though)--Lav parodies the premium Catholicism puts on sexual chastity, the objectification of women mounted on pedestals with the word 'VIRGIN' carved on the stone face. Sex as a means of connection, as a way of creating human souls, as a source of trauma and neurosis and finally horror--if the cult leader (who seems to abhor sex) is finally revealed to be insane, it's telling that before being so exposed we see him gazing into a mirror (his insistence on chastity perhaps his way of saying there's no love better than self-love).

The different stories reflect each other, repeat visual and narrative motifs, correlate in complex ways; characters are distorted, translated from reality to fiction (and vice versa), their circumstances ultimately transcended (or degraded) so that Lav's difficult experience with 'birthing' his proposed film (Woman of the Wind was an actual project he never managed to finish) becomes this difficult six-hour process of women birthing their respective destinies becomes in the end a woman in a field giving difficult birth to her unwanted, rape-engendered child. The filmmaker with shoulder-length hair uncannily like Lav's watching the horror, the terrible beauty of this most natural of processes, can only respond with laughter--a sign of acceptance or rejection or insanity, one can't be sure; the best one can hope for is that the child didn't suffer too much.

Lav's Norte, Hangganan ng Kasaysayan (Norte, the End of History, 2013) was uncharacteristic of him--the film was in color, involved several writers (Rody Vera, with story contributions by Michiko Yamamoto and Raymond Lee), and featured relatively brisk pacing. Mula sa Kung Ano ang Noon (From What is Before, 2014) looks like a return to his habitual style with its black-and-white cinematography, its solo-written script, its more contemplative stride...but I submit it's actually a break from what he's done before. 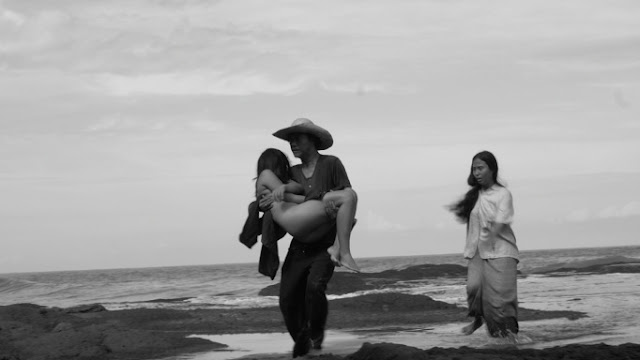 The film begins with the legend Pilipinas, 1970, a moment situated further back into the past than Diaz has ever ventured before. A boy hauling a huge bunch of bananas stumbles towards the screen, and we hear the words "This story came from a memory...." Diaz has used voiceovers before albeit sparingly, but not in the manner of a third-person narrator, a storyteller. The feel then--this early in the film, set I'm guessing far back in the narrator's own memories--the feel is that of a fable, a tale shrouded in mist and tinted with trauma, told with a sense of dread.


Where Lav explored the effects and echoes of Marcos' oppressive regime in films like Ebolusyon and other works (Melancholia, Encantos), Mula explores sources, root causes--not so much historical and social as psychological, emotional, spiritual. The villagers at the foreground of the film are too wrapped up in their own problems to really question what's happening about them; the visiting military calms their suspicions (somewhat) with courteously worded assurances and continues operations with professional efficiency.

Taking a page out of Mario O'Hara's Pangarap ng Puso (Demons, 2000), Diaz surrounds the village with the supernatural: a pigeon hunter apologizes to one forest spirit after another; a man found dead on the ground is said to have been bitten by an aswang; a town gossip suspects a woman of being a kapre's daughter and folks accept the accusation without question. One sign of foreboding follows another so that when the creatures finally step out of the shadows--when the monsters allow themselves to be finally openly seen--they're clad in khaki, automatic rifle strapped to one shoulder, and none (least of all the villagers) are surprised.


For Lav's first documentary feature he seems to go back for inspiration to Encantos, but where that film presented fictional characters in actual typhoon-devastated locations, Mga Anak ng Unos (Storm Children, 2014) records real people struggling with real circumstances; where the earlier film presented the ruined countryside as a reflection of the characters' ruined souls, this film has the children surviving, somehow even thriving amidst the destruction.


It's not a documentary full of sweetness and light, despite the premise--we see the children picking through the garbage-choked streets and sewers; we see them painstakingly dig up compacted junk and rotting cloth and other stuff too disgusting to identify (in a way these youths remind one of the medieval folk in Alexei German's Hard to be a God, glorying in all that muck and manure, looking at the camera and sticking out their tongues). One young man narrates with jawdropping calmness the story of how his whole family was killed by a storm-surge driven ship sweeping across the coast the way a scythe sweeps across a row of wheat--has time passing healed his wounds, is he too young to care, or has he yet to grasp the enormity of his loss?


More, Lav did this film months after Typhoon Haiyan (known to Filipinos as Typhoon Yolanda) hit the island of Tacloban, and the city still looks barely rebuilt, the surrounding landscape littered with the gigantic hulls of ships, as if some malicious titan had scooped them from out of a rucksack and scattered them like seeds. What has the government done since? Where is the aid so loudly promised? Half the film takes place under hard rain, which makes you further wonder: what happens when another typhoon strikes? Are the people--and the authorities presiding over them--any more prepared now, as they were before?

Lav doesn't judge; he just gazes with unblinking lens and allows the people to speak for themselves. Maybe not even that much--they mostly exist, bustle about, eke out a meager existence while Lav's camera follows at a respectful distance.

The film ends with a shot of a pair of those killer ships, floating some distance from shore--the kids have taken to climbing aboard and jumping off from the railings. Life goes on, the film might be seen as saying, which at best is a corny truism---perhaps more useful is the observation that life will take advantage, whatever the obstacles and whatever the circumstances, in this case granting Lav's children unfettered access to what may be the world's tallest, coolest, most elaborate diving platform. Small compensation belatedly granted, but it's something to make up for the cataclysm these children have experienced.

Not perhaps Lav's best--I miss him wearing the hat of scriptwriter and not just director/editor/cinematographer, miss his cunning dramaturgy and as often eloquently funny dialogue--but it's a pointedly different direction for what may be the Philippines' finest living filmmaker. 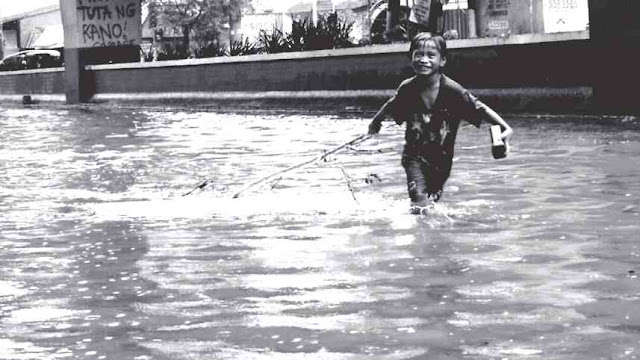