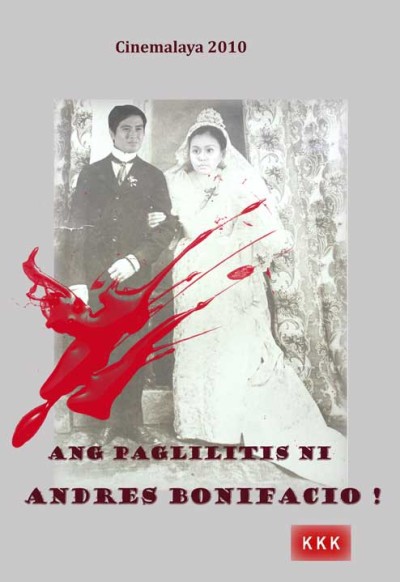 Don't have a perfect system for choosing, don't pretend to have one; basically I try pick whatever had some kind of commercial release in the USA; that, or if they had a release in the Philippines, and I failed to include them the previous year (plenty of those). Or I feel I can actually include them in a 2010 list because they have yet to have (nor will they probably ever have) a commercial release, and I want to acknowledge them anyway. I try to err on the side of inclusiveness.

As for what constitutes "best" as opposed to "notable," purely gut feel, as in: I roll the title down my tongue, and if my gut tingles with similar or greater excitement at the mere sound of the words, it's in; otherwise, it's out. That's why Social Network, which I liked a lot when I first saw it, is relegated to the "notables." Others I like too much but are too otherwise flawed to include in "best."

Which is probably all bull, of course. Look up the titles, read my articles if you like, see if you agree or disagree. I find this more useful than having some half-assed committee sit down and tabulate a vote--as if two minds can actually agree on something valid and worthwhile. And as for all that statistical jazz--averaging out, grade curves, lopping off extreme values, I quote Mark Twain: "there are lies, damned lies, and statistics" and misquote Chairman Mao: "let a thousand best-of lists bloom!"

The best of the year:

The Fighter  - how does it shape up against other recent fight movies? It's different enough to be worth watching, with its video footage and edgy editing, and that's plenty enough in my book.


Forbidden Door - One of the better horror films in recent years...and not a silly swan in sight!

The Ghost Writer - I'd heard the complaints--the story isn't all that much, it's not Polanski's best, how could you endorse the work of a criminal, etc. I say: it's not the story but the style that reverberates, I think it's at least thematically and tonally linked with Polanski's best, a sort of Cinema of the Paranoid, and as for that last part--am praising the work, not the criminal. Have plenty of unpleasant to downright convictable people whose work I happen to like.

The Girl on the Train - Think John Hughes only sophisticated, and possessed of subtler storytelling instincts.


The Imaginarium of Dr. Parnassus - a relatively normal (?) Gilliam film, about the doctor and the Devil and a really nasty customer.

Mary and Max - Two friends an ocean and a continent away, talking to each other through the postal mail. One of the saddest and loveliest-looking animated films in recent years.

Ang Paglilitis ni Andres Bonifacio (The Trial of Andres Bonifacio) - Mario O'Hara's take on the other great Filipino hero is understated drama, anguished tragedy, a tremendous love story, and in my opinion the film of the year.

A Prophet - The Godfather in French, and in the claustrophobic confines of prison. The coming of age of a young crime lord, and what's so chilling about the story is that he's only too ready to take up the reins of power.

Restrepo - one of the best documentaries about the war in Afghanistan.

The Secret of Kells - the other great animated feature of recent years, an unflinching celebration of Celtic imagery.

A Single Man
- Tom Ford's debut film is visually gorgeous and dramatically compelling, about a gay man who has just lost the love of his life.

Shutter Island - Leonardo DiCaprio's other (and in my book, far better) nightmare trip, a descent into schizophrenic states of paranoia as only Scorsese can conceive.

Thirst - In a year full of bloodsuckers, the one vampire film that really transgresses, and the first Park Chan Wook film I really like.

Vengeance (Johnny To) - Basically Christopher Nolan's Memento, only done by a real filmmaker. The plot--a Parisian chef seeking revenge for the death of his daughter's family--is an excuse for extravagant gunfights and thriller sequences as only To--arguably the consistently finest filmmaker working now in Hong Kong--can do em.

Of course you have grand opera slow-motion; of course you have balletic gunslinging; of course you have casually funny sequences of male camaraderie--with Woo you might wonder at the homoeroticism, with To you get the genuine vibe of a bunch of boys hanging out and fooling around (what makes To so moving is that his heroes are often overgrown boys, living up to and enforcing an often fatal code of honor). An example: when it's time to move into action, Anthony Wong tosses a peanut at Suet Lam's face; Lam picks the nut off his cheek and without much forethought pops it in his mouth. Lovely.

The White Ribbon - along with Park Chan Wook the other enfant terrible of World Cinema at his most magisterially measured.

The flawed but interesting, or otherwise notables:

Breathless - funniest, most jaw-dropping version of Beauty and the Beast I've seen in recent years.

The Girl who Played with Fire - an improvement in my book over the first installment, The Girl with a Dragon Tattoo, in that the aforementioned girl meets her snarling, relentless match.


Himpapawid - Raymond Red's first feature in years is the tragicomic story (partly true) of a man who wishes to fly.

How to Train your Dragon - Yet another animated picture not Pixar that seems to offer something other than the standard Pixar uplift. Including Jay Baruchel with a voice performance that evokes a teen Woody Allen.

The Hurt Locker - won over ex-hubby's overproduced CGI epic, which is no big feat, but nevertheless a compelling psycho drama, possibly the best yet on the Iraq war.

Invictus - Eastwood's tribute to the Obama administration (at least that's how I read it), and a compelling rendition of an interesting footnote in world history.

Kick-Ass - comic book movie of the year, even if it is morally questionable.

The Killer Inside Me - Winterbottom's graphically faithful rendition is too literal, yet there are touches that make it worthwhile.

The King's Speech - The testosterone version of Pygmalion, My Fair Lady, or Educating Rita leaves us with the image of two men in a room, struggling for domination, and reassurance, and human contact.

Let Me In - Not a bad remake. Not as good as the original, but it honors its source.

Machete - Avatar reeks like a potful of fermented Smurfs; Inception seizes up like a constipated large intestine; Machete is the action movie of the year. It has balls, it has breasts, it has sweat, it has blood, it has style, it has humor, it has a heart as big as all of Mexico.

Unlike Cameron, Rodriguez has a sense of irony about himself; unlike Cameron he feels the Big Message (illegal immigration and racism) in his bones. Unlike Nolan, Rodriguez can actually do an action sequence; this may be his best work yet. It's easily his most consistently sustained.

My Son, My Son, What Have Ye Done? - oddly subdued collaboration between Werner Herzog and David Lynch that, thanks to its precisely slanted view on life, oddly stays in the mind long after the credits roll. Indelible images include a vivid no-budget staging of The Eumenides, of a basketball caught in the branches of a sapling, and God coming out of a garage door and rolling down a driveway.

Salt - Old-school action filmmaking (circa '80s) at its best.

Scott Pilgrim vs. the World - Let me put it this way: Edgar Wright made me like my first video game movie. Small miracle.

The Social Network - Fincher's epic dramatization of an online phenomena fits into his gallery of lonely protagonists obsessed with the eternal.

Survival of  the Dead - George Romero as the ultimate termite artist, doing straight-to-video installments of his legendary Dead series.

The Tourist - Hitchcock redux, yes, but in this day and age of in-your-face action and even louder romantic comedies, secondhand Hitchcock is better than no Hitchcock at all.

The Town - not quite as precise as Heat, not as funny or intense as The Departed, what Affleck's film does have is an ineffable sense of place and time.

Up in the Air - Imagine that, a comedy about unemployment. Best portions are the actual interviews of laid-off workers.

Voyage of the Dawn Treader - Arrives at a point when the Narnia series starts to become really interesting. Special effects are second-rate, but Michael Apted's direction keeps the emotions and relationships clear, as they should be.

Where the Wild Things Are - Not as good as Sendak's twenty-page original, but as its own creature it's not bad.

Nice list. I'd love to see Forbidden Door and the Korean Breathless. My best shot is if any of these films are available on English subtitled DVDs, unless someone pays my way to attend a film festival with a decent selection of Asian films.

Thanks. Sometimes I get lucky with the festivals--otherwise it's the three d's--downloads, dvds and dickering.

Thanks Noel for the list. hope you won't mind me commenting on some entries:
Kick-Ass - so dangerous in its entertaining because viewers (example: me) might forget the Uma Thurman here is just little girl.
Let Me In - says so much about the greatness of Let The Right One In. Almost a copy-cut and yet still received a lot of praise for it.
Ghost Writer - agree. Polanski is really good. Pianist and this one. lucky me for catching two Polanskis in a short span of time.
In your list I am looking forward to seeing the following (in order of priority):
1 - White Ribbon
2 - Ang Paglilitis
3 - King's Speech
Lastly, you hate Black Swan?

White Ribbon you will see, in one form or another. I'd make Paglilitis no. 1 priority--it'll be so much harder to find.

No, I don't hate Black Swan; I hope people don't misunderstand. I like it very much. I just don't respect it very much, is all. I think it's South Park does The Red Shoes.

I saw Brilliante Mendoza's Lola last year and I thought it was pretty good.

I have to agree with your choice of The Fighter. Between his contemporaries Leonardo Di Caprio and Matt Damon, I thought Mark Wahlberg was the better actor although the movie was more of a tour de force for Christian Bale.

Mario O' Hara still make movies? How come we don't get to see them here at home anymore?

I agree, Bale's was by far the best.

Yeah, Mario still makes movies. It came out for Cinemalaya. Don't you keep up with that?

Great list Sir Noel. I've seen some of the titles and quite agree on The Fighter. I was surprised, even, at how much I liked it very much, even though my dl'ed copy is not crystal clear. And Shutter Island is the film that everybody (at least in the awards circle?) forgot but not me. Haha. And of course other 2009 titles like The White Ribbon, A Prophet, Thirst.

Hi Noel, I made a compilation of lists of top Pinoy films of 2010 and I included yours. I posted it in our blog here: http://threetimezones.wordpress.com/2011/04/16/ten-best-reviewed-filipino-films-of-2010/.

Good list! Kick-Ass, Scott Pilgrim, The Expendables and Salt were some of the better movies of 2010. One of the worst was The Last Airbender.

I'm of two minds about Last Airbender. Yes, it's bland; yes it's silly to incomprehensible. But Shaymalan's been doing such poor work recently he needs to break out of his cocoon of failure somehow. This was one attempt, and I'll at least give him points for trying.