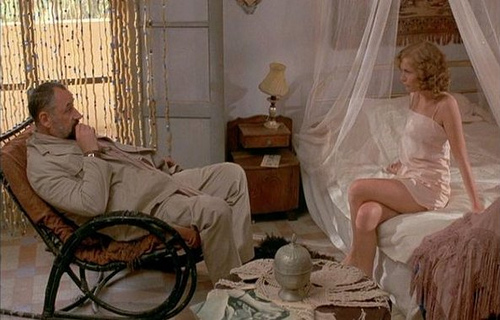 I liked Michael Winterbottom's The Killer Inside Me, but didn't feel entirely satisfied with it--was even less satisfied because I couldn't put my finger on exactly why. I thought it had something, despite the critical acid bath it suffered, and thought it at least in one aspect improved on the original, in the casting of baby-faced Jessica Alba as a prostitute with a taste for sadomasochism. That said, it seemed to me that Winterbottom's deadly earnest tribute to Thompson missed the taint if not the tenor of the original.

Took my re-viewing of Bernard Tavernier's Coup de torchon (Clean Slate, 1981) to clarify matters. Tavernier struggled with trying to adapt Thompson into French--he wondered how to transplant the racism against blacks, wondered how to capture the wide-open spaces of Texas, and so on. He hit upon the idea of relocating the action to the sandy plains of French West Africa (now Senegal), where, as Michael Dare in his Criterion article points out, African slaves were first shipped out for the New World.


The film begins as if it were a Jerry Lewis movie. Lucien is a weakling--pushed around by his bosses, cuckolded by his wife, even knocked on his behind by a pair of pimps. Hard put to say when Lucien finally 'gets it'--perhaps at the police station, where a pair of boots are planted firmly on the seat of Lucien's pants, shoving him through double doors at a laughing audience outside. The blow jars something in Lucien's head, or the humiliation acts like the spark that, in effect, starts the piled autumn leaves blazing. One dwells on this moment because it's both so obvious yet somehow completely mysterious--the moment when good-natured bumbling Lucien has transformed into a cunning sociopath (or has he been one all along?). "I've seen the light," he says, climbing aboard his return train; the officer listening to him wonders about these words and so do we--just what has he seen exactly? That's something the  the rest of the film will attempt to answer.

Instructive to compare the rest of Tavernier's film with Winterbottom's. Winterbottom's has moments of intense, even unwatchable (for most people) violence, yet ultimately it's Tavernier's version that feels more disturbing. It's been pointed out that Lucien's character chats a lot, that with the pratfall first half your sympathies are with him (Philippe Noiret as Lucien is, like Alba in Winterbottom's picture, brilliant casting: he looks and sounds and moves like an amiable old teddy bear, ready and wanting to be hugged); when Lucien turns killer that sympathy swiftly sours, like aged cheese in a constipated belly. You feel swollen, full of fetid wind.

But I think it's more than just playing the identification game; it's the fact that Winterbottom treats violence seriously, respectfully, with his undivided attention; Tavernier treats violence pretty much the same way Lucien does--topped with a heaping dollop of irony. Attitude is the crucial difference--Winterbottom's Lou Ford is solemn and efficient while he brutally bashes his girlfriend's face in; Lucien likes to pause and chat, dropping bon mots along the way, entertaining his victim as much as he's entertaining us, lulling us into thinking he's still his easygoing self when he's perfectly willing to take it all the way.
And he's clearly sane or at least sane according to his terms (crucial difference there). He's coherent and consistent in maintaining his world view, and his world view is consistent enough and coherent enough to allow him not only to operate successfully in the new world, but to scheme and plot and avoid capture; it's only when you listen to him closely that you realize he's a fully operating sociopath. "Better the blind man who pisses out the window than the joker who told him it was a urinal," he at one point declares. "Know who the joker is? It's everybody." Right and wrong summarily defined, and--with his next statement--casually, catastrophically rendered irrelevant.

Lucien knows who to blame, too: "They say we are made in God's image, though if that were true I wouldn't want to meet him in a dark alley." As for him and his role in all this: "I'm not a policeman, George," he tells the brother of one of his victims. "I'm Jesus Christ in person, sent here with a load of crosses, each bigger than the next." He's a highly intelligent man with a philosophy that seems entirely normal, only he happens to stand at its moral and judgmental center (think about the implications of that, and just how monstrous it can be). He's more than just a mere killer, he's the central figure in Michelangelo's vast mural, rendering judgment on all the sinners deserving and undeserving alike--that's the full extent of his psychosis.


Thompson's novel adds details that don't advance the plot, that somehow open up can after can of squirming, writhing possibilities--Lucien's declaration to a police officer, for example, that he saw the officer's brother still alive after he had supposedly died. "No," the bewildered officer declares, shaking his head. "No!" I'm guessing these little nonsense bombs are meant to explode in your head after you've mulled over the details, for maximum aggravation. Tavernier includes the visual equivalent of these little puzzlers onscreen--a brief shot of a beach late at night, for example, little crabs scurrying out of the way (can't think of a reason for the shot, except to express what Filipinos call 'crab mentality'--the all-too-Filipino (human?) tendency to shove a fellow crab aside in the never-ending scramble to gain favorable position). Then there are the scenes that bookend the film--the first featuring an ominous solar eclipse, a foreshadow of the darkness to come, the latter involving eyes peering down a gun's sights, the eyes' narrowed lids suggesting the protagonist's narrowed focus in his prey.

In the DVD interview Tavernier talks about how he used the Steadicam to create an unstable, centerless picture. This was true for the film's first half, when no one seemed to be clearly in control, but I feel less true for the film's second. There the camera seems to favor Lucien, to sit down and listen to him as he puts forth on life, God, and his role in the world. It's as if Lucien, a slacker at the film's opening, gradually takes over, his sociopath point of view gradually moving front and center, eventually becoming the world's. He does move up in the world, becomes a force to reckon with; and in Strangeloveian fashion, current events catch up with him in the form of the Second World War (it's something long anticipated, and in fact something of a running gag: "Is it the war? Is it the war?" "With you it's always the war! World War Two breaks out and of course they're going to tell me first!"). Personal, semi-divine psychosis has gone global; murder and madness holds sway over all. A dark film, a chilling film, and above all, a funny film--one of the blackest comedies I know. 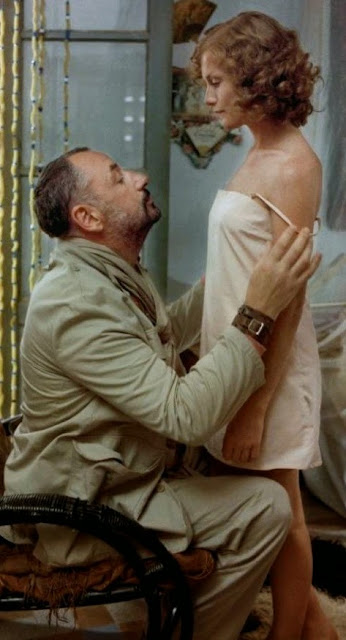 Great post, Noel. I haven't seen the Winterbottom film you're talking about here, but I love that Tavernier film. You do a great job of capturing how it lulls you into one mood only to turn to much darker, uglier material. It's a profoundly cynical film about a very cynical world, and the decision to transplant the story into colonial Africa was inspired. Lucien's curdling good nature becomes a symbol for the ways in which a corrupt system ultimately corrupts all those who exist within it, even (or especially) those who are by nature more amiable and kind.

Oh, and Isabelle Huppert is phenomenal in this too, she's got that lazy sexiness that's just perfect for that character.

What gets me is that Noiret is so appealing. Big teddy bear--you almost understand why Huppert keeps wanting to jump him. Even at his worst--I'd say, that scene where he takes that black man out to bury the body--you stay with him; you still feel as if you want him to succeed, even it's murder.

And if I had a Huppert in my pocket like that I'd count myself luckier than Zuckerberg.