Black Swan, The Fighter, The Tourist, Voyage of the Dawn Treader 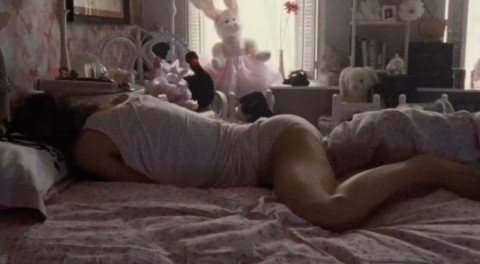 Natalie Portman, basically trying to do to herself what Aronofsky was doing with this movie

The Chronicles of Narnia: The Voyage of the Dawn Treader

Michael Apted's adaptation of the latest Narnia movies has plenty the matter with it, of course, and it all starts from how the whole series was conceived and designed--a bit of Peter Jackson's Lord of the Rings (the sweeping, digitally constructed  battle sequences, the rousing martial music, the odd sea serpent or dragon), a bit of Harry Potter (the magic flashes out from hands and objects like so many digitally added laser beams). Whoever the production designer and special effects supervisor were--either Apted signed on without insisting on approving the design or effects beforehand or he's never been one to obsess over a film's overall look or this may not have been a personally significant project for him--they prioritized boxoffice appeal over putting out a distinct product. Ironically, boxoffice receipts in America look to suffer--the first weekend is weak, and only gotten weaker--though the picture is doing better in markets outside the United States (I'm generalizing here, but the picture seems to do better in countries that accept or practice strong Christian tradition).


But that's the boxoffice; how's the film itself? Despite the weaknesses (the effects, the design, the timid air of being a feeble Lord of the Rings knockoff), I do like the film. It may not be a true Narnian film, but it's Narnian enough that you get some of the flavors of C.S. Lewis' classic.

And Lewis' fantasy series is a classic, I say. Lewis may not be the flavor of the moment the way Tolkien is, and I know the strong Christian subtext puts many readers off, but I prefer his books over Tolkien's for a number of reasons:

1) He's well-versed in science fiction (he knows enough, say, of Olaf Stapledon to be able to criticize him), and he uses a few of the genre's concepts (the idea, for example, of relative time (Narnia's time flows faster than our world's), of doors that open to other dimensions (see The Magician's Nephew, and The Last Battle), and of Very Large Objects, complete environments within complete environments (some suggestion of this, plus sophisticated examples of dimension-twisting in The Last Battle)).

2) He ranges freely over his world, from its very beginning (The Magician's Nephew) to its furthermost reaches (Voyage of the Dawn Treader) to its subterranean habitats (The Silver Chair) to its final destiny (The Last Battle) the way Tolkien never does with his Middle Earth (there is The Silmarrillion--but how many outside of Tolkien completists read that dull tome?).

3) He is not above adding the inventively imagined creature or situation, or even resorting to the occasionally surreal. Lewis' Narnia has its share of elves, dwarves and dragons, but--a faun with an umbrella, walking past a lamppost in the middle of a woods? A race of invisible creatures (who look even stranger when made visible?)? A sea of lilies, beyond which stands a permanently roaring wave of water marking  the end of the world--which happens to be flat?

Tolkien has mastered the galumphing blood-and-thunder, sword-and-sorcery style of storytelling, but after reading the whole series through more than once, I've finally found the Ring books endlessly tiresome, endlessly conventional...whereas, I suspect, we've barely scratched the surface of Lewis' Narnia.


Lewis' series is more than just adventure and magic and Christian symbolism, though. At the end of the day it's really all about the Pevensies and their longing for Narnia and Aslan--arguably the greatest imaginary playmate ever created. About Prince Caspian (now king) who has grown older, sadder, hopefully wiser since taking charge of Narnia; about the splendid Ripicheep, possibly the most gallant and great-hearted mouse in all of creation (and I include that insufferably wholesome rat what rules an allegedly magic kingdom down in Florida); and about Eustace Scrubb, an odious little boy who, thanks to the influence of Narnia, becomes considerably less odious.


Apted, who in films like The Coal Miner's Daughter and even Gorillas in the Mist has proven to be skillful (to say the list) in depicting onscreen relationships, does a fine job here; his Ripicheep (voiced by Simon Pegg) is small only in stature while his Eustace Scrubb (Will Poulter, brilliant) is hilariously self-involved; they meet onscreen like flame and gunpowder, and you enjoy the resulting sparks. The ending, where the Dawn Treader reaches the End of the World and lives are irrevocably changed, is a fine mix of muted tragedy and bittersweet triumph, a fitting capstone to this latest (and, judging from the money that isn't coming in, possibly last) installment.

Florian Henckel von Donnersmarck's latest is another one I feel I've got to speak up for, which is a bit of a surprise--I'd seen von Donnersmarck's far better received The Lives of Others and wasn't all that impressed; thought the protagonist in that picture made a few dumb moves, though the film as a whole captures the era's feeling of exhausted despair.

Critics have called The Tourist "slow" and "muddled," the two leads "lacking chemistry." What I found was an old-fashioned caper film, elegantly paced, with stunts that look realistic enough to be actually dangerous (the rooftop sequence reminds me of Roman Polanski, a master at depicting hazardous heights, though von Donnersmarck makes an honorable enough attempt) and a cleverly structured plot--refreshing change from all the hysterical, frenetically paced thrillers released recently, all noise and heavy artillery and very little style.

I find that the two stars are totally at ease with each other, are not afraid to play their parts--Johnny Depp here is not Johnny Depp the international star, but a nebbish on the run (he's always been fond of losing himself in his roles). Jolie plays Jolie; that's what the script calls for, that's what she plays.

The movie is not North by Northwest (to which it owes a huge debt); but then, few movies are.


Darren Aronofsky's Black Swan is, to put it mildly, a hoot and a half. A rising young ballerina feels insecure about her role as lead dancer in a prestigious ballet company's production of Swan Lake (she herself had inherited the position from the company's former lead dancer, who has since gone nuts). Throw in a Mephistophelean ballet director (Victor Cassell), a Stage Mother From Hell (Barbara Hershey), a duplicitous slut of a dance colleague (Mila Kunis), and you realize--with the camp rising in your gorge--that what you're watching is a demented showbiz melodrama on speed: Showgirls in tutu.

But no, Aronofsky isn't satisfied with this. He has to throw in actualized psychodrama--bones cracking, skin transforming, feathers sprouting in the oddest places. Admirers call it a confluence of David Cronenberg with Michael Powell and Brian De Plama; I say Aronofsky is trying to ape the named filmmakers, only he doesn't have Cronenberg's seductive pacing, or Powell's unassuming craftsmanship, or De Palma's comic sense of cruelty.

Winona Ryder goes all Sissy Spacek on us while Natalie Portman looks desperately thin; about a quarter of the movie is Aronofsky zooming into gigantic closeups of Portman's pinched face, revealing half a pound of makeup on her wasted cheeks. Vincent Cassell spends his screen time pounding Mila Kunis, kneading Portman's steamed pork buns, or walking away with the picture tucked firmly in his pocket.


Scariest moment is Barbara Hershey as the Stage Mother from Hell, clipping Portman's fingernails almost to the bone (Hell Hath No Fury like a pissed-off mother wielding a pair of nail scissors). Only time I cringed.

Word is that Aronofsky was supposed to do The Fighter; thank heavens it was given to David Russell instead. Where Aronofsky is all over the place with his Monster Goose psychodrama, Russell tells his story simply, quietly, with as much honesty as he can (he does more with plain sunlight than Aronofsky does with spotlights, shadows, and splashy CGI effects). Bale is fantastic as Dicky, Whalberg quietly effective as Mickey, and Melissa Leo amazing as their hard driving mother (like Hershey she's a Stage Mother From Hell too, only you spend as much time feeling for her as you do laughing at her).

The performances are all terrific, but it's Russell who does the star turn. His editing rhythms are eccentric, restless; he likes to show, say, a man getting out of a car, then either cutting out a shot of the man crossing the street, or cutting out a shot of the man knocking and entering, or cutting out the shot of the man getting out of the car--depends on how he feels at the moment, and how he wants you to feel. Unlike Aronofsky--who is all huge closeups revealing the human visage as a cratered, mountain-ringed horror--Russell likes to shoot at medium to long shot, basically keeping the drama at arm's length, keeping you conscious and alert of the material at hand.

Only with the fight sequences does he close in, but here he deploys the video cameras used in so many HBO boxing matches, deploys the actual music you would hear from such matches (not for him the Bill Conti symphonic uplift used like a ten-ton truck in the Rocky movies). There's a cheesiness to the music, and the film in general, but it's a self-conscious cheesiness, wielded with a knowing wink.

Like Aronofsky's picture, this is a hoary old storyline, a combination of Former Fighter Finds Redemption and Two Brothers with Differing Destinies; unlike Aronofsky, this is done with an acute, intelligent eye, and great sensitivity. One of the best of the year.

Thank God The Fighter did not end have a depressing ending like Million Dollar Baby. Reminds me also of Ron Howard's criminally underrated Cinderella Man.

Uh-uh. On matters Ron Howard you're on your own.

I haven't seen Black Swan but I'm intrigued because I keep on reading/seeing references to Repulsion--a movie I really like.

Lemme put it this way: Repulsion is to Black Swan what The Sopranos is to Jersey Shore.

Sometimes I get lucky.

What is your favorite Natalie Portman movie??
mine is Garden State as well as the Anywhere but here

"But there's hardly any Portman in 'Heat'!"